A star on the rise mans the kitchen of Bainbridge's Firefly. 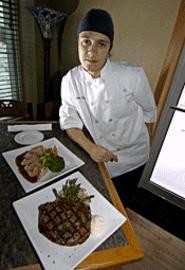 When it comes to sophisticated food scenes, no one expects Cleveland to compete with Vegas, Chicago, or even Philadelphia. But that doesn't mean our kitchens aren't burning with genuine talent -- young men and women whose names may not yet be familiar, but whose cuisine can speak for itself.

We stumbled across one of these celebrities-in-training a few weeks ago in the kitchen at Firefly Seafood & Steak, the casually upscale bistro in Bainbridge owned by chef-restaurateur Michael Longo. Busy herding his Cowboy Food & Drink concept into a chain of laid-back barbecue joints, Longo has wisely turned Firefly's kitchen over to Executive Chef Justin Finney, a 25-year-old Culinary Institute of America grad who started cooking for Longo while he was still in his teens. After completing his training, Finney worked for several years at both Moxie and Red, in Beachwood, with well-respected Executive Chef Jon Bennett. But when he got the call from Longo a few months ago to take over the Firefly kitchen, it felt like something of a homecoming.

"I said, 'Is the recipe for the balsamic-glazed chicken breast the same as always?'" Finney laughs. "Because somehow, I remembered it. It hardly felt like I had even left."

But while it may be true that Firefly's menu hasn't substantially changed since Finney's first tour, it's equally apparent that he has brought a touch of refinement to preparations that, in the past, could sometimes seem a little overwrought and busy. As a result, while the menu is still filled with rich, assertively flavored dishes, they are now almost relentlessly well prepared, balanced, and cohesive.

And that's no mean feat, considering the size of Firefly's contemporary American menu and its propensity for borrowing freely from both Asian and Mediterranean pantries. Fortunately, sound menu organization makes it relatively easy to eat one's way around the world, and Finney's steady hand at the helm makes the journey a pleasant one.

Though tapas often seems like a dirty word in Cleveland -- chefs will tell you that diners here aren't exactly devouring the small-plate concept -- the first half of Firefly's menu is obviously devoted to the notion of grazing. There are more than two dozen small-plate starters that can be enjoyed on their own, shared with friends, or cobbled into a multicourse dinner, as a diner's waist size and wallet dictate.

Start, for instance, with dainty beef carpaccio, the rosy, see-through ribbons of seared tenderloin blushing beneath the complement of lemon oil, arugula, capers, and shaved Romano. Proceed, perhaps, to a lush, autumnal salad of buttery roasted beets, precisely whittled into bite-sized cubes and joined by crisp Granny Smith apple, creamy feta, and toasted walnuts in a sheer sherry-walnut vinaigrette. And close, if you will, with a generous bowl of sturdy seafood chowder, the creamy, "just right" base buoying a bounty of fresh-tasting lobster, mussels, and scallops.

Then again, it would be a shame to miss out on the ahi tuna served "three ways": first, five-spice-rubbed and seared; then tartare, with orange oil and sea salt; and finally, sashimi style, illuminated by a few strands of unusually floral pickled ginger and a dab of honest-to-goodness wasabi, from Pacific Farms in Oregon. Prettily arranged on a compartmentalized porcelain platter, eaten with chopsticks, and washed down with a sip of Rouge Imperial Pilsner ($15.50 for a 750-ml bottle), this dish alone could be all that you need for a light, wholesome dinner.

But if you prefer robust flavors brought forth in more prodigious quantities, that can be achieved here too. Among the steaks and chops, the 20-ounce, bone-in rib-eye was a whopper, with a one-two punch of high-wattage beefiness and velvety texture. Well seasoned in the kitchen and redolent of the fire, it yielded a flavor medley that could scarcely have been jazzier. An eight-bone rack of lamb packed a similar punch: assertively seasoned, precisely cooked to order, and juicy as all get-out.

At prices that range from $19.50 (for wild-mushroom meatloaf) to $32 (for a 14-ounce long-bone veal chop), entrées aren't exactly inexpensive. Still, most of them include a choice of two side dishes from a long list that encompasses everything from baby green beans amandine to macaroni and cheese, as well as a choice of such freshly made sauces as béarnaise, bordelaise, and pistou. That not only makes each entrée a good value, but presents an almost limitless amount of variety, even over the course of repeat visits.

One night's companion decided to create an updated version of Cleveland's classic pub platter, adding fresh-cut roasted garlic fries, sleek sautéed spinach, and a whisper of lemon-caper sauce to a plump, juicy cornmeal-dusted walleye filet. Alternatively, a textbook version of bordelaise made the perfect match for our lamb, along with attentively grilled asparagus spears and a toss of firm macaroni shellacked in white cheddar. And with the rib-eye, a lively pistou of olive oil, garlic, parsley, and hot pepper proved a rousing addition; while on the side, mashed baby Yukon Golds could have convinced us they were really whipped cream, and a trio of gently roasted baby carrots added seasonal eye appeal.

Considering the size of the menu, the kitchen's few culinary missteps seemed like relatively small potatoes: dryish crabmeat in a lump-crabmeat cocktail, overcooked Brussels sprouts in a "Brussels & bacon" side dish, and otherwise competently prepared risotto that was hijacked by too much caramelized onion.

Of more concern, though, was the slow pacing on a busy Saturday night, as the kitchen crew fell behind on orders and the intervals between courses grew ever longer. Inattentive service just added to the pain. On one occasion, our waiter seemed perfectly content to huddle with his colleagues in a corner instead of stopping by to assure us our food would soon be on the way. And on a weeknight visit, a waitress chose to scrape the coffeepot's burnt, bitter dregs into our cups rather than take the time to brew a fresh pot.

Still, the kitchen's desserts helped sooth our service-related sorrows. Finney's delicate pumpkin crème brûlée, topped with toasted almond slices, is capable of calming all but the most curmudgeonly snits. Likewise, decadently rich, mascarpone-intensive tiramisu could wheedle a smile from Scrooge. Then there's Firefly's signature sun-dried-cherry and white-chocolate bread pudding: not too dense, not too sweet, and not soon forgotten. Cheesecake Factory cheesecake, a deep-fried dessert burrito, and a not-bad version of the ubiquitous chocolate "lava" cake from a commercial supplier round out the options.

With its handsome decor, relaxed yet sophisticated vibe, and food that rarely disappoints, Firefly remains one of the region's better restaurants. It's not as if Finney's reinventing the wheel here, but with his respect for detail and craftsmanship, he certainly makes it run smoothly. And that is saying a mouthful.