Huge in Sweden, the Hellacopters are bringing their rambunctious rock and roll to the American masses. 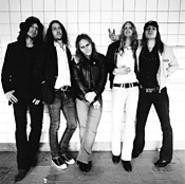 Sweden's the Hellacopters are fundamentally so in tune with the basic precepts of rock and roll that it's easy to group them with such greats as the Stooges, MC5, the Sex Pistols, AC/DC, and Motorhead. The band's sound is as essential, incendiary, and natural as any produced by those bands. Some critics have argued that the Hellacopters' approximation of that kind of righteous, hell-yeah aplomb is too studied, but that doesn't make their bombast any less forceful.

Nowhere is the Hellacopters' propensity for ground-shaking action more evident than on their latest album, High Visibility, which actually came out in Europe last year on Universal, as the group's first major-label bid. But like the Clash's first album, and a plethora of similar trans-Atlantic blunders, the label declined to issue the LP in the U.S., despite the fact that the Hellacopters had already toured here a number of times and were beginning to establish a rabid following, thanks to two ultra-high-energy efforts for Sub Pop, Payin' the Dues and The Grande Rock. Now Gearhead has released the record here, and it's a great thing to behold: another cauldronful of diesel-fueled methamphetamine madness.

"When we first recorded it, a year and a half ago, Universal decided to wait to release it in the United States," says Hellacopters' keyboard player Bobby Lee Fett, speaking from L.A., where the group began its sixth tour of the U.S. "It's been released everywhere else, including Japan and Australia, but none of their American branches picked up on it. Sub Pop had a lot of other releases and couldn't release it last fall, when we had hoped to, so we ended up with Gearhead."

And the timing couldn't be better. Rock and roll of the high-energy, scaled-down variety is making a comeback in the form of the Strokes and White Stripes. In this climate, the Hellacopters' gas-huffing brand of pandemonium could also become a hit.

Such mainstream acceptance would come as no surprise to Fett, who says that, in Sweden, the group is a well-known commodity that regularly plays arena gigs, opening for such luminaries as Ozzy Osbourne and Kiss.

"We prefer to call it stadium rock," he says. "We feel comfortable in that environment, but we didn't want to do that with this tour. We wanted to do our own thing, so that meant we've gone back to playing the smaller clubs."

Still, listening to the throbbing, visceral High Visibility, it's clear that the Hellacopters' sound is made for large, wide-open spaces -- the better to hold copious numbers of Marshall stacks. Parts of this album, like "Toys and Flowers," for instance, conjure memories of '70s arena rock. It's obvious from past 'Copters' opuses like "Lonely" -- as well as new ones like "A Heart Without Home" -- that Kiss has always been a big influence.

Despite this infatuation with '70s heavy metal, the Hellacopters remain a punk band at heart. They were schooled primarily in the Motor City ethos of the Stooges and MC5, with a fair share of Aussie angst thrown in, via the Saints and Radio Birdman. So, while this album is a little more ornate than such previous scaled-down skull-busters as Supershitty to the Max, the cleaner production does little to compromise the group's blitzkrieg attack. Listen to the flesh-flaying charge of "Truckloads of Nothing" for complete MC5-style abandon. Speed is still very much a qualifying factor in the band's overall gestalt, as epitomized by breakneck material like "I Wanna Touch." In many ways, the melodic but still forceful qualities of these songs are exactly the kind of punk/mainstream crossover that previous contenders like Husker Du and Bad Religion strove for, but ultimately failed to achieve (at least in the mind of the public).

"The album was recorded at the old Abba studio in Stockholm," says Fett. "We weren't so much influenced by the technology as we were by the space. We just had a lot more elbow room."

This expanse of sound makes the group sound more powerful than ever. What's important is that these guys have learned to pace themselves, and it's just possible that High Visibility is the most consistent LP yet by these purveyors of the grande rock.