If He Can Save The Dunk Contest, Lebron Will Truly Be A Hero 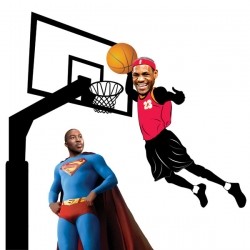 In preparation for the NBA's first official slam-dunk contest in 1984, Larry Nance, then a Phoenix Sun, pondered a possible dunk from the free-throw line. Everyone told him it was too easy, too weak to bring against Dr. J and Dominique Wilkins at the All-Star Game in Denver. "I could dunk from the free-throw line back in the day," says Nance. "I was long enough. I wanted to jump with my toe just on the line, but they told me not to."

Of course, students of the game know that during that very competition, Julius Erving launched himself from a similar position - a moment enshrined in dunk lore as the first of its kind. As Nance remembers though, "Dr. J did it with his heel on the line and got a 50. I was like, Whoa, are you kidding me."

It didn't matter. Nance took home the first dunk crown, and after judging this year's high-flying festivities in Phoenix, he now serves as an unofficial bookend of the contest - he was there at the start when a twisting alley-oop was groundbreaking, and he was there for the whatever-you-can-do-I-can-do-over-a-car-while-blindfolded present.

When he talks about that moment 25 years ago, he isn't simply living in the past. Nance is too focused on getting his drag-racing career into high gear to spend his days rehashing old memories. What the High-Ayatolla of Slamola was getting at was the possible heights and lengths that LeBron James could push the dunkapades to next year, if he participates.

"I think he should jump from the free-throw line with the toe, not the heel," says Nance. "Everyone else has done it with the heel - Dr. J, Michael. That would be the greatest dunk ever."

I had been thinking the same thoughts ever since LeBron announced his preliminary interest in finally joining the dunking ranks at next year's contest, during the All-Star Game in Dallas. After watching Nate Robinson literally play the Kryptonite to Dwight Howard's Superman in Phoenix - with all the requisite props, of course - it's difficult not to yearn for a little simplicity.

The contest, as it's now constructed, is one step away from what mascots do during timeouts, jumping off trampolines and over cheerleaders and through rings of fire. Theatrics, while entertaining, have obscured what lies at the competition's heart - the ungodly athleticism of the best players on the planet.

Well, when the best athletes actually agree to participate.

At this rate, Dwight Howard will return as Superman again next year, joined by Nate Robinson as Krypto-Nate, and Lisa Leslie will be marched into action as Lois Lane to complete the comic cameos.

Although the event is one curly red 'fro away from becoming Carrot Top-approved, the props are just part of the problem. Rosters that used to be filled with names like Jordan, Wilkins, Vince Carter and Dr. J are now littered with lesser knowns - good athletes without the star power. And the rules now allow unlimited attempts at the rim.

LeBron, if he participates, seems intent on fixing every issue. He told The Plain Dealer's Brian Windhorst, "It's got to be cleaned up, they have to go back to maybe the '80s with [Michael Jordan] and Dominique [Wilkins]. You can't have so many chances at dunking the basketball. The whole anticipation of a dunk contest is one or two tries and that's it. If not, you get [a score of] 30 or 35. Guys are getting 10 opportunities to do the same dunk; by the time they complete it, it is like … 'OK, we've seen it.'" He continued, "Right now, I am going to be in it. I won't be the only big-name guy. I'll make sure I get a few guys."

Which brings us back to the free-throw line, that daunting location 15 feet from the rim that was the measuring stick for great dunks 25 years ago and still serves that purpose today. Jordan, Brent Barry, Dr. J and others have launched from that spot, of course, with varying degrees of success. Like Dwight Howard this year, many have placed a toe, a heel or a whole foot on the line before taking flight. Few have legitimately set up shop behind it. James White, who won this year's D-League dunk contest, soared from clearly behind the stripe. It's no wonder that he got more hype among hoops heads than Superman Howard or Nate Robinson. The free-throw-line dunk is iconic; one only has to glance at the famous image of Jordan hanging mid-air, tongue out, legs bent, ball palmed, to be reminded of that.

Maybe the gags and shticks are part of the normal evolution of the one-upmanship of dunking. After all, there are only so many things a normal guy can do between liftoff and the rim. A blindfold, a cheerleader, a cape - it's all topical differentiation in the guise of innovation, distractions when the underlying physical capabilities are even across the board. Until someone draws a line in the sand, say, about 15 feet away, maybe more. On the hardwood in the middle of the brand-new Dallas Cowboys stadium next year, LeBron could absolutely destroy that arbitrary but legendary NBA long-jump record. During a game against Milwaukee last year, he took off from damn near the free-throw line on a breakaway while flanked by two defenders and hammered it home. What he could do on the court by himself with a head of steam is a scary, scary thought.

If he shows up, forget toeing the line: he'll draw a new one. The King will be jumping out of the building while everyone else scrambles to put some bells and whistles on a dunk that literally 75 percent of NBA players could do. Who knows what else LeBron might have in his repertoire that night. But I would bet on him bringing the contest back home where it started in 1984, while also taking it to heights and lengths no one has ever seen before.