Kasabian wants to become the coolest, most stereotypical Brit-rock band around. 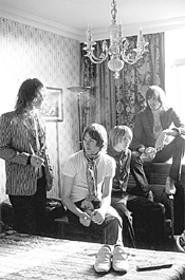 In addition to the ever-popular "bloody wankers" and "daft cunts," there are two somewhat more charitable insults that Britons hating on their nation's dominant rock bands like to sling. "Bed-wetters" is directed at overly earnest, sensitive swoon merchants like Keane, Coldplay, and Snow Patrol. "Students," meanwhile, is the derisive tag hung on Franz Ferdinand, Muse, and anyone else perceived to be indulging in artsy pretension.

It takes only a few moments on the phone with Sergio Pizzorno -- guitarist and chief songwriter for the kinetic U.K. dance-rock quintet Kasabian -- to figure out that neither term applies to him. It's four in the afternoon, and he's just rolled out of his bunk.

"I decided to go on a two-day drinking binge, and it was an incredible experience," Pizzorno murmurs in his thick Leicester accent. "But now I'm here, but I'm not, and we have sound check in a few, so I gotta get with it."

And, he adds, if the festivities to come are anything like the previous stops on the band's inaugural U.S. tour, he wants to be more than semiconscious. "There's been a ton of girls, man! That's the reason I play guitar. Well, it's not the No. 1 priority, but it's definitely a nice little bonus, mate."

Chicks, booze -- when you're named after Linda Kasabian, the Manson family member turned state's witness, you can't come across like a namby-pamby.

"I think nowadays people expect you to sip your tea and talk about fookin' Tchaikovsky, or go on about the fookin' poem book you just read on the bus and get weepy, and that's bollocks, mate," says Pizzorno. "Life's too short for that shit. We have as much fun as we possibly can, and we make great music," he continues. "It's what we do . . . we're rock-and-roll stars, man."

Well, it's hardly the first such audacious statement Pizzorno and his bandmates (singer Tom Meighan, guitarist-keyboardist Christopher Karloff, bassist Chris Edwards, and new drummer Ian Matthews) have made to the press recently. The U.K. media has had a field day with Kasabian's oft-stated intention to become the latest savior of British rock. And while his band's self-titled debut album finally was released in the U.S. in March, six months after its British release, Pizzorno has already discovered that word of Kasabian's cockiness has preceded the group's stateside tours.

"It's funny," he says. "Some people here in America say to us, 'Ahhhh, you fooks, you come over here with this arrogant fookin' rock-and-roll attitude, and that's dead now, those lifestyles are dead.' And they're not, mate, they're not."

If Pizzorno maintains a worldview befitting a Gallagher brother -- certainly appropriate, since seeing a 1995 Oasis concert inspired him to form his own band -- Kasabian displays a swagger and energy that has less to do with anthemic pub-rock than with the baggy grooves of the Stone Roses and Happy Mondays, and the dark, electronic-laced psychedelia and sloganeering of Vanishing Point/XTRMNTR-era Primal Scream. The latter vibe is especially evident in the lurid, distorted bass line, the walloping drum loop, and the whooshing synths that propel opener "Club Foot," as well as in the druggy haze of "I.D.," with its disorienting keyboard oscillations and shoegazer guitar pulsing under laconic vocals.

When he's not channeling Bobby Gillespie's menacing drawl, Meighan demonstrates a knack for melodically slurry Shaun Ryderisms, made all the more obvious on tracks like "Processed Beats" and "L.S.F. (Lost Souls Forever)," which sport some of that old Madchester chemical bounce.

Of course, in a move reminiscent of that whole Interpol-Joy Division hubbub, Pizzorno disavows any connection to the groups most often cited as obvious influences.

"I gotta say I'm sick and tired of talking about the Mondays and the Stone Roses, 'cause I don't hear it, personally," he insists. "I never even cared for those bands. They're good people and they're nice and they were fine and all of that, but it's not my thing and it has nothing to do with this band."

"It makes it harder and harder to do interviews, I gotta tell you," he continues, the frustration in his voice becoming alarmingly palpable. "It just makes me mad when journalists use other band names to describe us. You can't win, really. You just gotta get to a point where you sell enough albums that you can just do one interview, and that's it."

Though we're certain he's about to hang up the phone, Pizzorno actually softens a bit. "I guess if no one was ringing us up, then we'd be just as frustrated, you know? Because then we'd be like, 'Why is no one caring?' When we were kids we said we were gonna take over the world -- not that we knew what that meant. So I suppose that once you talk the talk, you gotta walk in the trousers, and you deal with whatever comes your way."

And when he starts thinking about the fact that Kasabian has a real opportunity to make it big with American fans, who might be tiring of the recent trend of Brit-band wimpiness, the guitarist teeters dangerously close to sentimentality himself.

"We can't fookin' believe it. We're just some kids from Leicester, and the fact that someone in fookin' San Francisco can come see us play and buy our album now is fookin' incredible. The best moment I've had in my life up to now was seeing it in the package with the cover and all of that, and knowing it was gonna be on shelves around the world; that was what I dreamed of for so long."

Then, of course, Pizzorno remembers who he is.

"It's gonna live for a long time, this album. In 30 years, my kids are gonna come up to me going, 'Have you heard of this band?' And I'll be like, 'Ahh, yeah, they were really fookin' cool, one of the best bands in the world. And they weren't fookin' bed-wetters.'"