For Local Crop, linking farms to forks could be a tough row to hoe 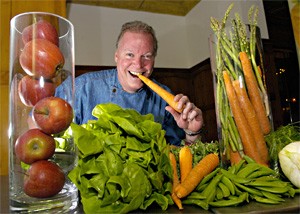 Give him a chance, and Steve Schimoler will talk your ear right off. Innovator, entrepreneur, and self-styled culinologist, the chef-owner of downtown's Crop Bistro is the kind of data-packed guy his colleagues call "a genius" and "a mover."

Still, it has taken Schimoler most of the last decade to find a solution to a problem that has long bugged him: How to move locally grown foods from the farmers who produce it to the restaurants that want to use it.

You don't have to be a foodie to know that today's diners are clamoring for locally grown eats, particularly in the wake of recalls, reports of food-borne illnesses, and environmental concerns, including the ever-increasing costs of long-distance transportation. Plus, most of us have come to recognize another simple truth: Fresh food just tastes better.

Yet as a chef, Schimoler knows that buying local can be brutal. "It's all so time-consuming," he says. "First you have to chase the farmers down; then you have to figure out how to get the stuff to your kitchen without it going bad. And then you have to write each one of them a separate check to pay for it. It's completely inefficient!"

It's no picnic for farmers either. They're generally so busy working their land that they have no time to develop a marketing strategy. And should they somehow find a buyer, the cost of getting their goods to market — including fuel costs and time away from the fields — can be daunting. "They can't just drive around selling this stuff out of the back of the Volvo," Schimoler says, only half-joking.

After years of pondering the logistical problems, Schimoler has come up with a solution — one he thinks will bring small Ohio farmers and chefs into instantaneous contact, streamlining payments, providing efficient transportation, and ensuring the safety and wholesomeness of the products. His system also will increase demand for farmers' goods, which will grow their businesses and pump money back into the local economy.

He calls his solution Local Crop. At its heart is a "virtual farmers' market" that he and partner Jackie Shultz, a food-service sales and marketing pro, plan to launch in early July.

While not an entirely new concept, Local Crop is arguably this region's most comprehensive plan for internet partnering. Testing a similar system is Fresh Fork Market, a project undertaken by five Case Western Reserve students; that system, www.freshforkmarket.com, is expected to go live at the end of May.

As for Schimoler, he expects to secure a core of at least 50 to 80 farmers and producers within 150 miles of Crop. Since they're tough to define, Schimoler won't require "sustainable" practices, but he will encourage them. Likewise, "organic" products are preferred but not mandated. And while small operations are Local Crop's target, any size operation is welcome.

It's a great idea, all seem to agree. And if anyone can pull it off, Schimoler seems like the guy.

"This is not my first rodeo," he likes to point out. He's referring to ChefEx.com, the innovative online distribution system he developed in 1999 while in Vermont, to link chefs with artisanal food producers. He sold that concept to SYSCO Corporation in 2002; the nation's largest supplier for the "meals away from home" market, SYSCO still runs the program.

So predictably, when it came time to pin down the technical details, Schimoler chose SYSCO to help "power" Local Crop. Among other things, that means SYSCO Cleveland will oversee the online orders and payment system, provide a central distribution point for farmers — most likely a 463,000-square-foot facility near the airport — and transport orders to chefs via their fleet of temperature-controlled trucks.

Farmers will benefit from other SYSCO-related services, including discounted rates for laboratory soil testing, to rule out dangers like E. coli and lead, and assistance in obtaining liability insurance at discounted rates.

Such safeguards are usually out of reach of smaller farmers, says Alan E. Hasty, president and CEO of SYSCO Food Services of Cleveland. But thanks to SYSCO's size and reach, "We can bring a lot to the party."

Yet with the start of Ohio's growing season fast approaching, the question remains: Can Schimoler find enough farmers to meet the demand?

To some observers, like Flying Fig owner/chef Karen Small, Local Crop may well land Schimoler between a rock and a hard place: Focus on the small producers and fall short on quantity, or work with big producers and risk losing artisanal quality.

"It's important we make sure we are using the right people — people who really care about the food," she says. "If the goods come from big, corporately owned farms, how is that better? I would hate to see 'local' become a cliché."

Reinforcing Small's concerns, many artisanal producers, like Tom Wiandt of Killbuck Valley Mushrooms, insist they're too tiny to take part. "I already have a waiting list for restaurants," says the Burbank grower, a regular at the year-round North Union Farmers' Market on Shaker Square. "I like Steve and I certainly think his concept is viable. But at this point, I just don't have the volume to participate."

Donita Anderson, who runs the North Union market, is even more skeptical. While she lauds the Local Crop concept — "A positive on all ends, it will only strengthen the local movement" — she doesn't see small farmers taking part. "There's no way Steve can use the people we use. He needs larger-volume farmers, who can supply a broad marketplace. Our farmers don't need him; they already go home at the end of each market day with empty trucks."

Schimoler admits he expected this "push back," but he calls such thinking shortsighted. "Just because they've emptied their trucks, does that mean they really don't want to do more? What if I show them they can reduce their overhead, supply those waiting lists, and maybe triple their business, all without risk? Don't you think they'll want to get in line?

"It's just a matter of proving the concept. I spent the first year at ChefEx convincing farmers that we really do have all the answers. Then the phone started ringing off the hook."

At this point, in fact, Schimoler says he's "not at all" worried about securing a supply: When he rolls out the website (www.localcrop.com) for initial testing at the end of April, he says it will be stocked with scores of local products — cheeses, pastas, organic grains, meats, and early fruits and vegetables. And by the end of the season, he feels certain he will have enrolled his 50 to 80 core producers.

Quality is not about size, he contends. "In fact, if our goal is to make a difference in the environment and the economy, we want local farms to get bigger, as they respond to the increased demand.

Schimoler knows it's also about trust: Trust that Local Crop will do right by its producers, buyers, and the environment.

"Developing this hasn't been easy," he says, "but I'm in it for the long haul. I know we'll face some skepticism, and I expect it. But at the end of the day, we'll have our success story."