Louise Bourgeois's vibrant prints have a youthful quality that belies the artist's 88 years. 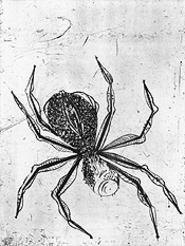 Louise Bourgeois, the French-born artist whose well-known surrealist sculptures from the mid-'40s suggested white and sky-blue surfboards leaning toward one another as if engaged in conversation, is enjoying a productive Indian summer. In 1992 she was the only woman to be included in the Guggenheim Museum's inaugural show for its Soho branch. A spry 88, she continues to create, and an exhibit called Louise Bourgeois Prints: 1989-1998, now on display at the Cleveland Center for Contemporary Art, has a freshness and a sense of new discovery that would be the envy of many artists half her age.

Bourgeois makes art that grows out of her own experience, which has been shot through with turbulence. In the artist's early childhood, her father carried on an open affair with her nanny. When she was twenty, her mother died. Bourgeois left France in 1938, got married (to art historian Robert Goldwater), and, "in order to express unbearable family tensions," she embarked on sculpture and prints, so that she could "change, destroy, and rebuild" forms.

Feminist theorists have suggested that women tend to approach autobiography (and, by extension, autobiographical art) differently from men. If men are constantly looking for the patterns that create a unifying theme, women embrace complexities as part of a continuing process of self-definition. In the prints on exhibit, women are both femmes fatales and victims, spiders and cats, mothers and daughters. Bourgeois's description of her mother typifies the fluid and flexible view of female identity that runs through all the work in the exhibit: "My best friend was my mother, and she was deliberate, clever, patient, soothing, reasonable, dainty, subtle, indispensable, neat, and useful as a spider . . ."

Bourgeois's association of mothers with spiders is not original to her, but that is of little consequence to the viewer. What matters is whether she has added something of her own to the symbol. Psychoanalyst Selma Fraiberg has put it this way: "Symbols are sterile things in themselves; it is only when the symbol is animated through personal experience, when it acquires dimensions of meaning and ambiguity, that it can evoke emotional reactions." Appropriately, Bourgeois's "Spider" is as complex as the verbal description of her mother above would suggest. Along with its symmetry (four legs on either side) and the grace of its bipartite division into head and abdomen, this spider has a dark alluring power. Its intricately detailed abdomen is fashioned from hundreds of little circles, spirals, and inky black dots. Bisecting the abdomen is an almond-shaped form that suggests a woman's genitalia. Bourgeois's detailed verbal description of her mother left out the recognition of her sexual potential, and that, it seems, is what she is celebrating in this print.

Likewise, frank imagery is used to explore aspects of female identity in the print called "Stamp of Memories 1 (Ste Sebastienne 1)." In it, we see a woman whose rounded body is clothed with the artist's own personal monogram, a capital L and B in florid script. The monogram, like the work of which it is a part, is made up of curves: The L and B are like vines that have intertwined (a metaphor, perhaps, for the value that women place on relationship and connection). The woman depicted has two faces: one is that of a cat, the other that of an assertive femme fatale. She wears a headdress that sweeps upward and which is filled with three eggs -- symbols, Bourgeois tells us, of her children. The jarring feature of this work is the series of arrows that point, successively, to the woman's belly, her neck, a breast, a thigh, and a calf. These arrows suggest that a woman, though confident and in touch with the feline part of her personality, can also be a victim. The subtitle suggests such a reading, as it refers to the saint whose martyrdom is depicted by his body shot with arrows.

The effect also recalls some work by Frida Kahlo (the long-suffering wife of Diego Rivera and a gifted artist in her own right), who also explored the connection between arrows and victimhood in her own highly autobiographical art. Among the last drawings in Kahlo's diary is a nude self-portrait with arrows pointing to various spots on her head and body, which, in the words of her eloquent biographer, Hayden Herrera, "suggest psychic and physical suffering." Kahlo also once painted herself as a deer with a body shot with arrows. Clearly, artists like Bourgeois and Kahlo are tapping into something deep in the female experience. Perhaps they are alerting the viewer to the idea that bodily health is intimately connected with psychic health. Anything that touches the body touches the mind, for good or ill.

An interesting aspect of Bourgeois's work is the way printmaking serves as a link between her youth and her old age. She has said that "my childhood has never lost its magic, it has never lost its mystery, and it has never lost its drama." Her first burst of intense creativity came in the late '30s and early '40s, when, as a young woman, she made about 65 woodcuts, lithographs, etchings, and engravings in which she often portrayed memories from her childhood. In the late '80s Bourgeois returned to printmaking, and her concerns at 75 dovetailed neatly with her concerns as a woman of 28. It's fascinating to note how artists return to certain techniques or media to give expression to particular phases of their creative persona. The modern Russian composer Dmitri Shostakovich bared his private torment in his string quartets, while he gave free rein to an impersonal kind of virtuosity in some of his large orchestral pieces. Just as Shostakovich favored the string quartet when he wanted to get personal, Bourgeois seems to favor printmaking when she wants to explore her childhood memories.

Even when a print is not overtly about childhood, Bourgeois's intimate approach is rewarding. A recent print called "Hamlet and Ophelia for BAM" (the piece was created for the Brooklyn Academy of Music) is a compelling meditation on its Shakespearean source. To understand what Bourgeois has done, we must go back to the original. Ophelia, we all know, committed suicide after apparent rejection by Hamlet. If Shakespeare is ambiguous about the details of the why, he is eloquent in telling us how she took her life. The relevant passage describes how Ophelia approaches the drowning pool with "fantastic garlands." Then she jumps: "When down her weedy trophies and herself/Fell into the weeping brook. Her clothes spread wide/And mermaid-like, awhile they bore her up." Ophelia throws herself into a pool of water that seems to weep as she weeps, and presently she's swallowed up. The passage has undeniable sexual undercurrents: the "clothes spread wide," the suggestion of total absorption, and the climax with the punning suggestion that it was the water-filled clothes (and not her own will) that "pulled the poor wretch from her melodious lay to muddy death."

In steps Bourgeois. She, too, links love and death but goes a few steps further: In her print, Hamlet joins his beloved in the drowning pool, and they join as she goes under. Which is to say, Bourgeois is interested in pursuing the idea to its extreme -- though not in the manner of the love-death scene in Wagner's Tristan und Isolde, which was an embrace to end all embraces. Instead, she simply puts herself in Ophelia's place at the moment of her suicide and tells us that Ophelia might have been yearning for Hamlet in her final moments. There are hints of this view in Shakespeare, and Bourgeois amplifies them to fine effect. The artist envelops both lovers in a red spiral pattern but then imposes a diagonal between them, thus stressing that Hamlet is above water, Ophelia submerged in it. This could suggest that, at 88 years old, Bourgeois is still torn by this scene from Shakespeare in which a young woman died before her time. That she, as a young woman, was devastated by her mother's untimely death adds a hint of poignancy to this print.

By any standard, these forty prints constitute a striking body of work. The viewer gets the impression that Bourgeois has not grown weary with age. She has explored the same themes throughout her career, but she continues to find new and arresting gradations in those themes. Her recent prints suggest she retains her sense of vibrancy and new discovery.

Charles Yannopoulos can be reached at cyannopoulos@clevescene.com.