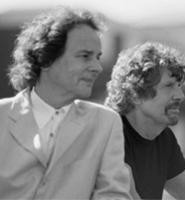 So what is garage rock, anyway?

"Everyone has their own definition of what 'garage rock' means," says Dan Elektro, drummer for the soulful southern stomp quartet the Woggles, by phone from San Francisco. "My definition is a pup tent, and some describe it as a circus tent. What's the difference between 'rock' and 'rock and roll'? It's banging your head versus dancing, but there are also similarities. It's a sliding scale, not a firm line."

Singer-songwriter Colin Blunstone of the harmony-drenched British Invasion quintet the Zombies describes something comparatively broad. "Underground band or garage band, those terms weren't in use when we began," Blunstone has said in an earlier interview. "But one of our strengths was that we drew from cathedral choir music, classical, R&B, modern blues and rock and roll -- some of which the Zombies played as covers and all of which seeped into the original music."

Now, taking a cue from the slippery end of the spectrum, the Woggles and Zombies -- along with three-chord proselytizers the Mooney Suzuki, leather-clad Detroit foxes the Gore Gore Girls, and other regional acts -- are toeing the rock and roll line across America as part of the "Underground Garage," organized by "Little Steven" Van Zandt. Van Zandt's long résumé includes an ongoing gig as guitarist in the E Street Band, as wiseguy Silvio Dante on HBO's The Sopranos, and as host of several terrestrial radio/Sirius Satellite Radio shows/channels. It's this last role that resulted in the tour sharing the "Underground Garage" moniker with Little Steven's syndicated show and Sirius channel.

Little Steven's branded efforts show how far garage rock has come since the days when it faded into near-obscurity. Garage (and often psychedelic) rock was the original form-your-own-damn-band genre. Those born during the post-WWII baby boom had the luxury of practicing in their parents' new suburban basements and garages. Amped by the hysteria surrounding British Invasion bands and primal hormones -- plus the occasional hallucinogen -- these initial do-it-yourselfers did their best to cobble together enough budget to bash out three minutes of glory on a 45 before the anticipated breakup after graduation. Among those early adopters were such bands as the Sonics, the Electric Prunes, the Creation, Strawberry Alarm Clock, and 13th Floor Elevators.

But don't let Tom Hanks' feel-good That Thing You Do! fool you: Radio play and immortality were the exception, not the rule, for garage groups. A surge of bands emerged, only to be overshadowed by an industry-wide move toward high production values and concept albums, once the Beatles released their revolutionary Sgt. Pepper's Lonely Hearts Club Band. Many '65-'68 bands were gone so quickly that by 1972, the only thing keeping their memory alive was Lenny ("Godfather of Garage") Kaye's Nuggets LP, which collected their best stabs at stardom. In '98, presaging the post-millennial garage-rock boom, Rhino Records expanded and reissued Nuggets.

Unlike many of their peers, the Zombies actually did achieve a highly respectable level of success -- albeit briefly -- with such mid-'60s hits as "Tell Her No" and "She's Not There." But the denouement suggests the typical garage-rock trajectory. By '68, the band had broken up -- before the release of Odessey and Oracle, its critically lauded LP (featuring "Time of the Season"). The Zombies' Blunstone and keyboardist-songwriter Rod Argent did not reunite until 2001, when Little Steven co-sponsored the "Cavestomp!" concert series, forerunner to the Underground Garage. Now the two have resurrected their classic arrangements and recorded new material under the Zombies' name.

"I'm probably entering into autumn," says Blunstone when half-jokingly asked his time of the season. "And it's a season I've grown to appreciate. I used to dread autumn as the beginning of the end, but why does the year end at December? It doesn't. So I enjoy it, and I feel that's where I'm at."

Certainly no nostalgia act, the Zombies are the jazzy elder statesmen of the tour, though the Woggles are no slouches, having kicked out the adrenal vibrations for almost 20 years. Now they're bringing out a new album on Little Steven's own label. (In a total coincidence, the upcoming album includes a song featuring Zombies influences -- written, says Dan Elektro, long before the "Underground Garage" tour was scheduled.) What unites these seasoned groups is an attitude. The tour's primary bond is an outgoing, no-ego attitude that can be traced all the way back to the youthful enthusiasm of the '60s.

Of garage rock, Little Steven writes at his website: "Keep in mind that, one hit wonders or not, every Garage band wanted to be stars. They weren't intentionally sloppy or out of tune. Okay, the Stones were, but most weren't. The bands had a look, they had style, and they had a common concept or philosophy going on once they hit the stage. It might be cool and casual, it might be aggressive, it might be individual expression rather than band 'uniforms,' but there was always a unifying or complementary thing happening that spoke with one voice."

"I think our relationship with everyone else is that there's a lot of overlapping in how we maintain energy, know how to work the crowds," agrees Woggles frontman the Professor. And Blunstone points to how easily he and Argent adjust set lists and arrangements to suit the area preferences.

In the end, though, what is most common among garage-rock groups -- and what has kept the genre from disappearing completely for 40 years -- is its genuine nature. At the end of the day, it's apparent that these bands want to play their hearts out, regardless of whether they end up as a DJ's new favorite or a lost classic.