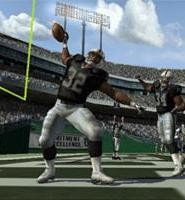 Football is a game of inches. The same goes for the Madden series.

Each fall, a new Madden game arrives, with a roster update and an incremental change in the game-play formula. Last year brought a "cone of vision" for the quarterback, which mostly just annoyed the fans.

Madden NFL 07 is no exception to the trend. The game is still the most accurate and enjoyable depiction of the gridiron available. And thanks to several new design features, this year's edition is slightly better than last year's.

Is it $50 better? Well, that depends on how much you dream of playing as a lineman.

Thanks to the new lead-blocking feature, you finally get to do the dirty work that springs the marquee running back. Here, you assume the role of football's often overlooked heroes -- offensive linemen and fullbacks -- to lay down punishing blocks. Would you like some syrup with those pancakes?

Another of the upgrades, the highlight stick, lets nimble running backs like Tiki Barber or Warrick Dunn juke defenders out of their cleats. Power backs like Larry Johnson or Steven Jackson get to blast through tacklers and send them limping off the field for Icy Hot massages.

But where Madden NFL 07 really tries to break off a run for big yardage is the new "superstar" mode.

It begins with an eerie exercise in Mendelian genetics: You're asked to choose your parents, using criteria such as profession, athletic prowess, and intelligence. If you want to play a speed position, such as wide receiver or cornerback, you'd better find some breeders with wheels.

As you progress through the draft, training camp, and eventually your rookie season, you'll grow into your position. You'll sign with an agent, field movie offers, and deal with uncomfortable questions from ESPN.

Most important, you'll have to perform on game day. Everything you do on and off the field affects a new "influence meter" that measures your standing as a pro.

It's impossible to discern exactly how your behavior affects the meter, but it boils down to this: Act like a dick and you hurt your team. Act like a team player and you'll boost your teammates' skills, along with your own. Play your downs right and you'll get your bust in the Hall of Fame.

In an era of Chad Johnson mohawks, Fred Smoot sex cruises, and Terrell Owens . . . well, just being himself . . . rewards for humility and teamwork could be just what's needed to put some class back in the game.

Unfortunately, Madden NFL 07 struggles to execute this noble goal. With clunky menus and an ambiguous path to success, superstar mode can be confusing. You never really know whether your stud athlete is improving his skills, let alone how. And it's a long and winding road to the Super Bowl. You'll be exhausted after four preseason games.

The real joy in Madden NFL 07, as always, is in playing against your friends. Not only are you the running back who hammers the fourth-quarter nail into your buddies' coffins; you're the fullback who takes out their knees with an illegal cut block. Boom!

Thanks to an exclusive licensing deal inked at the end of 2004, Madden is now the only pigskin sim with real players, so plenty of people are sure to buy it. But unless you're a diehard fan, the added features may seem like little more than minor tweaks of an already elaborate control scheme.

For those wanting "true" innovation, there's always next year. And the year after that. And the one after that . . .