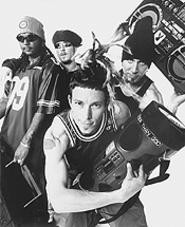 "Last night we were in Indianapolis, and we had a 20-minute comedy sketch halfway through our set," says Jimmie's Chicken Shack singer-guitarist Jimi Haha via phone from his home in Maryland, where he's taking a day off. "Then we tried to play "High,' but I started climbing up and surfing on the drums, and they all collapsed. It was nuts -- the whole band ended up in a big pile, with beer being poured on us."

Ah, the foibles of life in a rock and roll band.

Full of pot references, twentysomething humor, and the usual angst, Jimmie's Chicken Shack wants to rock out, get silly, have fun, and alternately tell off and then try to woo back ex-girlfriends through a compelling, dance-inducing mix of pop, ska, and every other musical idiom one can possibly name. It's a sound utterly comfortable in its familiarity and yet almost unclassifiable in its distinctiveness. It doesn't make sense in words. The ideas cohere only in the music.

"Everybody will always draw different comparisons to who we sound like, and the only consensus is that there is no consensus, and that's perfect," says Haha. "I hope there is never one. We don't want to paint that clear a picture."

While post-ska and pop-punk are the dominant flavors, Jimmie's Chicken Shack brings a revisionist approach to its edge-of-the-mainstream modern rock that is rooted, oddly enough, in both alternative and classic rock. From Haha's stage name to the white-noise sound of a radio dial spinning, from a dissonantly echoing chorus to a thrashing groove, the band melds elements as diverse as Jimi Hendrix and Pink Floyd into a warped whole with the likes of Nirvana and Jane's Addiction.

Speaking of warped, Jimmie's Chicken Shack is a band that would be right at home on the Warped tour, with its combination of self-effacing ballads, funk-lite workouts, and heavy cry-for-attention jams. It also has the cred the Warped tour fans require, as survivors of the modest radio and MTV hit "High," from its 1997 A&M debut release Pushing the Salmanilla Envelope. But Haha takes issue with the album's success.

"There was a bit of misrepresentation on that album," explains Haha. "It was all the harder songs, but live we always mix it up, and our sets go all over the place. We've been in the studio four times, but we're onstage all the time. That's just what we are, and it's where folks really get what we are about. Albums are a real experiment for us, because, in our minds, they're for headphones or a party or the car, and that's a whole different world."

"Do Right," the first single from the band's second effort, the Island/Def Jam release Bring Your Own Stereo, is an irreparably catchy hit that blends ska and reggae rhythms with heavy fuzz-box guitars. But while Pushing the Salmanilla Envelope rode those guitars all the way to the bank, Bring Your Own Stereo also incorporates trancelike passages and acoustic undertones into the mix.

"This is a totally different record from the last one we made," says Haha. "All of the tracks are really different. This one is much more fun than [Pushing the Salmanilla Envelope]; it goes more places stylistically. We've made a more honest record and we had more fun making it, too."

Part of what makes the album (and the band's live sets, these days) more honest is that, instead of playing songs that were written because there was an album to make, Jimmie's Chicken Shack is playing songs written over a seven-year period. It's almost quaint that this band living on the edge of MTV can believe in a folk-hippie idea like organic songwriting, but for Haha, ideas like process barely factor in.

"It loses something if you think about shit too much or work too hard or have an expectation," he says. "I'd rather just go and let it happen, like breathing and walking. One of the coolest things for me is that some of the songs were written on my own, not for the band, like "30 Days' and "Do Right.' They weren't written for anything other than to be songs for me, and we decided to put them on the album."

Despite the failed relationships that dominate lyrical content throughout the disc, an upbeat vibe propels the first half of Bring Your Own Stereo (in a nod to old-school hip-hop, or perhaps just Tom Petty, the album is broken into two "sides"). Playful pop nuggets like "Lazy Boy Dash" and "Let's Get Flat" keep the lyrical content light and the faux hip-hop party grooves kicking, while tracks such as "Trash" and "Ooh" weave together staccato guitar attacks and effects-laden vocals into edgy alt-rock.

These goofball antics and greasy rock cuts eventually give way to a second half drenched in guitar distortion and somewhat bland articulations of suffering. The savageness works on "Pure," the best tune from the disc's later stages, but the gathering intensity of "Face It" is quite a bit less convincing than Perry Farrell's piercing roar, and the gently acoustic "30 Days" barely scratches at the quiet desperation evinced by Roger Waters.

It's as if the album tries to simultaneously conform to and subvert the norm, and the results are occasionally stagnant. But it is Jimmie's Chicken Shack's struggle, and they have every right to be proud of it. Produced by Jim Wirt at 4th Street Recording, the former Beach Boys playground in Santa Monica, California, Bring Your Own Stereo doesn't align the stars, but it does reflect the band's current state of transition. After all, the band is still feeling the effects of a shakeup that left only two original members in the group: Haha and bassist Che' Lemon.

"Changing our lineup freed us up to do things we couldn't do before," says Haha. ""Do Right' was written five or six years ago, and no one would play it because it was a silly-ass song. But the people in the band have different attitudes now, and we're able to do stuff that we would never have been able to do before."

There's a conceptual freedom within Jimmie's Chicken Shack that battles against the perceptions of pop conformity, and it's a battle for the soul of the band. Although it will probably not produce an epic artistic masterpiece anytime soon, Jimmie's Chicken Shack has as much in common with the Grateful Dead as it does with Blink 182, and slowly and surely the band is finding its own voice.

"Will Bring Your Own Stereo alienate our audience from before?" ponders Haha. "Yeah, maybe, but maybe that's not such a bad thing. If you're trying to make it fast, then losing your audience is bad, but we aren't in a hurry. We know it'll take longer for folks to get the whole picture, and those are the people that we want anyway."