Novelist looks at black history through the eyes of a '70s film actress. 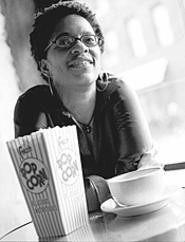 Growing up, Martha Southgate was forbidden to watch movies like Superfly and Coffy. "And I'm still not a fan of blaxploitation films," says the 44-year-old writer. "I think they're really amazing historical documents, but I don't love them like Quentin Tarantino does."

Odd, then, that Southgate's second novel, Third Girl From the Left, revolves around a struggling blaxploitation actress named Angela and her fractured relationships with her mother and daughter. "I had this idea about an actress who didn't quite make it," recalls Southgate, who grew up in Cleveland, but now lives in New York. "She didn't get what she wanted. She didn't become a giant success."

In 1970s Hollywood, Angela strives to make a mark in the movie genre that bridges sex, drugs, violence, and black plight. "Those films are particularly resonant within the African American community for representing a moment when it looked like certain things might begin to change," says Southgate. "It was a very exciting moment, and I was drawn to that."

But Angela's story covers more than just her futile attempt to be the next Foxy Brown. She connects with her aging mother, a witness to Tulsa's race riots in 1921, in which 36 people were killed after a black man allegedly grabbed a white woman in an elevator. And she tries to form a bond with her twentysomething daughter, a budding filmmaker. Both influence her behavior and philosophy.

"It brings another layer to the book," Southgate says of Angela. "She didn't get what she wanted -- and maybe didn't even want to be a mother. And her daughter, who had to put up with it. You need these people pulling against each other."

It's also necessary, Southgate maintains, to allow Angela to have a healthy sex life. She's a strong but spontaneous woman. "Sex as commerce has its costs," says Southgate. "But I also wanted to touch on the idea that sometimes sex is, well, kinda fun."