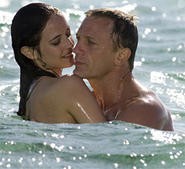 Casino Royale (Sony)
James Bond gets a stirring shake-up in the best -- yeah, Goldfinger fans, the best -- film in the series' 44-year history. Daniel Craig's 007 has more going on above the neck and below the waist than even Sean Connery's. He's a genuinely compelling character -- a bruised, fallible, cold-blooded bastard whose mixed triumph is to lose his one sliver of human feeling. As directed with renewed vigor and a splash of Cold War-vintage gloss by Martin Campbell, the 21st "official" Bond movie upgrades the moribund franchise in every way: The stakes are higher, the script sharper, the action scenes tougher and more dynamic than anything since From Russia With Love. And Eva Green, overqualified as arm candy, sets a new gold standard for Bond girls. Skip the second disc of blah featurettes and head straight for the tingly chill of Craig's blue-eyed glare. -- Jim Ridley

Bosom Buddies: The First Season (Paramount)
Seldom seen in syndication -- surprising, given Tom Hanks' ascension to Hollywood deity -- Bosom Buddies remains, as its detractors said way back when, Some Like It Not. Which isn't to say the dudes-in-drag sitcom, which lasted but two seasons (and the second was much better, God help me), was a complete bust (ha). Hanks and Peter Scolari -- as admen-turned-squatters (heh) Kip/Buffy and Henry/Hildy, respectively -- played off each other like vaudevillians who'd honed their act after years on the road. John Bonham didn't have timing like those boys -- who were eager to please, but without the condescending desperation that marked so many early 1980s sitcoms. Alas, there are no extras here; apparently, God ain't got time to talk about the days when He wore a dress to work. -- Robert Wilonsky

Shortbus (ThinkFilm)
Shortbus may be the first film that can be described as both "heartwarming" and "semen-flecked." The brainchild of John Cameron Mitchell, the creator-star of Hedwig and the Angry Inch, it follows the intersecting lives of assorted New Yorkers as they attempt to make sense of physical and spiritual love. Yes, there is explicit sex, and yes, it's a bit of a gimmick. But Mitchell is far too gifted to let this be the trainwreck it easily could've been. He gets truly naked performances from his actors, even when they're clothed; sex here is a subject and not just a payoff. Too bad the rousing closing number, which takes the place of actual resolution for the characters' problems, reminds us that Mitchell is capable of far greater films than this one. None of the actors here have the presence Mitchell had in Hedwig, even with their hoo-has hanging out. -- Jordan Harper

Harsh Times (Genius)
Here's another entry in that peculiar subgenre of films that suggest simply driving around L.A. is enough to drive a man insane. Harsh Times was written, produced, and directed by David Ayers, who wrote the last memorable entry in the genre, Training Day. And like Training Day, Harsh Times is saved by one monstrous and masterful performance. This time it's Christian Bale who gets to show off his psychotic side in a role that contains plenty of slow burns and boiling over. Bale plays a veteran who's supposed to be out looking for work (with Six Feet Under's Freddy Rodriguez, also good), but quickly chooses drugs, sex, and increasingly violent crime. It's all pretty implausible and rather formless, but compelling enough to spend an afternoon with. -- Harper