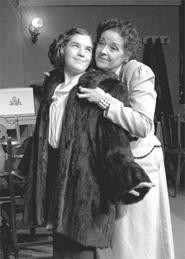 Have you ever tried to revisit a cliché and experience it as if you've never heard it before? Take the well-worn phrase "spur of the moment." Once you get past the fact that you've heard it a billion times, the power and freshness of the actual imagery appear in high-def clarity.

So it is with stories that have become hackneyed in our lives, such as the tale of Anne Frank. The tragedy of this teenager's truncated existence, snuffed out by Nazis in occupied Amsterdam during World War II, has been diluted over time, since everyone thinks they have internalized the message. But now we have a chance to relive her story and engage with it anew in the powerful Beck Center production of The Diary of Anne Frank.

In writing this new treatment of the original by Frances Goodrich and Albert Hackett, for a 1997 Broadway revival, Wendy Kesselman has downplayed Anne's idealism and enhanced her humanity. The playwright even places Anne's rosy line "In spite of everything, I believe people are really good at heart" in the midst of the most devastating moment of stark terror. And the hunted victims' Jewish faith, downplayed in the 1955 production to foster a larger audience base, is front and center here. As soon as Anne and her family enter the secret annex, they begin tearing at the yellow Star of David patches they had been forced to sew onto their coats. And even though the shadow of the six-pointed star remains, they celebrate a tiny moment of freedom from the oppression that has engulfed their country.

Once again, we encounter the almost unbelievable scenario of eight people who spent 25 months shut up in four rooms attached to the building where Otto Frank's business was located, never leaving and hardly ever daring to peek outside. Since there were workers nearby, the denizens of this de facto prison had to be absolutely silent for 10 hours every weekday, not even running water in the sink or flushing the toilet. Kesselman's adaptation slowly ratchets up the tension as we watch these fearful people cooperate and collide with each other, always with an ear turned to the steep stairway and the hidden door, listening for the footfall of an SS officer or a paid informant that could spell their annihilation.

Director Sarah May has a masterful touch with complex scripts, and here she blends a number of distinct voices into an evening of theater that has the seamless continuity of a top-flight chamber orchestra. While each character is given enough room to develop his or her own personality, the performances never devolve into a collection of solos without a purposeful center.

Much of the credit for that has to be handed to young Heather Farr, who belies her tender age by crafting an Anne that is just as spirited, irritating, and endearing as 13-year-old girls generally are. Even though she rushes a few beats when reading passages from the diary, Farr's curiosity about her physical changes and her attraction to Peter Van Daan (Aaron Dore), the son of the couple who share their hiding place, are convincingly portrayed. Indeed, the entire Frank family is handled to near-perfection, with George Roth essaying Otto, the patient and compassionate father, Anne McEvoy conveying a mother's frustration over her younger daughter's emotional separation from her, and Magdalyn Donnelly shaping older sister Margot's "boring" personality into a strong counterpoint to Anne's adolescent antics.

Some of the most interesting characters in Diary are the three other adults brought into the secret annex by Miep Gies (Dawn Youngs), the Dutch woman who risked her life bringing food and news of the outside world to the hidden Jews. Mrs. Van Daan's overweening vanity and superficiality are amusingly delivered by Paula Duesing, but she then adds much depth to this woman when she comforts her distraught husband in a tender scene. And Brian Bartels reveals all the weaknesses of Mr. Van Daan without making him unsympathetic. In the role of the socially awkward dentist who shares Anne's room, Mark Cipra is a sweaty and fidgety ball of contradictions, by turns obsequious and obnoxious.

Taken together, they are just eight normal folks, thrown into an unimaginable situation in which boredom and dread coexist in every waking moment. The work of May's tight ensemble pays off, especially at the play's staggering conclusion. Even though we know what's going to happen, the worst fears of the annex inhabitants are tellingly realized, in a scene of few words but overwhelming emotional impact. And during a quiet coda, in which survivor Otto relates the ultimate fates of the apartment's occupants, we are left to contemplate the horrifying results of unchecked governmental power. And we are asked to remember. Always, always remember.