Freedom Trolls: The Legally Obnoxious Antics of the Activists Behind 'Cop Block'

The folks whose cars are parked in the restaurant's lot on the west side of Cleveland want you to know exactly how they feel. There's the grey pickup truck with a homemade sign taped to its rear window, almost impossible to miss. It shows a giant fist with the middle finger flicked up in the air next to the world "police." The middle finger also forms the 1 in "1st Amendment."

And there's the black SUV with white stenciled lettering spelling out "IDEAS ARE BULLETPROOF" on the driver's side, "NO MASTER NO SLAVE" on the passenger's side, and "COPBLOCK.ORG" above the New Hampshire license plates on the back.

In a side room at My Friends Deli & Restaurant, a group of 15 to 20 people chat over chicken wraps and sweetened ice tea, and their talk mainly centers on how police officers "are a gang of thugs getting away with murder" and what the group can do to stop them. 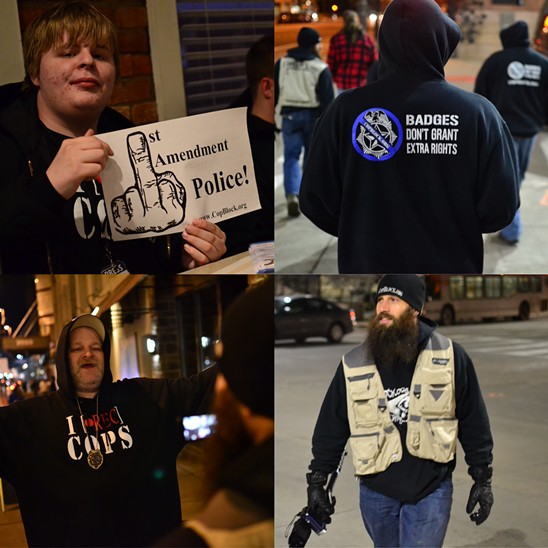 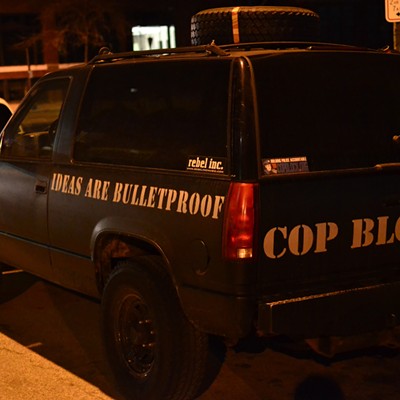 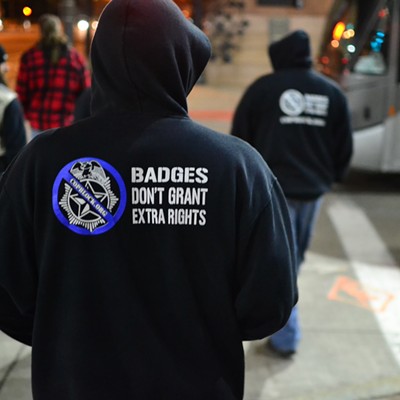 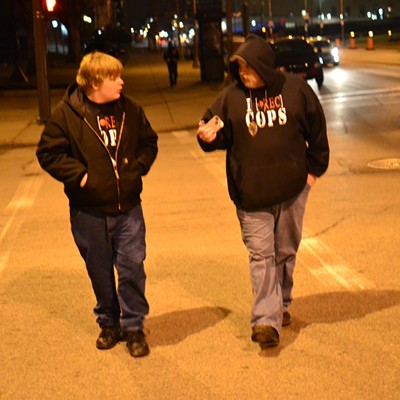 It's the second annual Cleveland get-together for the region's Cop Block chapter leaders, its supporters and anyone curious about "police accountability." Their numbers are small, but growing. It's a sect of self-appointed watchdogs, citizen vigilantes, actively searching out cop abuse on camera (and provoking it, at times) and spreading their findings through social media. The Internet is the little brother to big brother and Cop Blockers style themselves the physical outreach of that discussion.

"Last year we had three other people," says Doug Odolecki, a Parma resident and leader of the Greater Cleveland Cop Block. "It was me, a girl from Indiana, a guy from Michigan and Pete. And this is what we've been able to grow it to."

Pete is Pete Eyre, co-founder and philosophical leader of the four-year-old national Cop Block organization. That's his black SUV out front. Along with his pal Adam Mueller — known by his alias Ademo Freeman — Eyre started Cop Block in New Hampshire, as the organization's site says, "an outlet to share his personal experiences as a victim of the war on drugs as well as the ongoing harassment from local law enforcement due to his previous victimless actions."

Cop Block's logo is a video camera trained on a profiled officer, and that's essentially how they work: keeping the cameras rolling as an attempt to capture actions they deem abusive or dangerous threats to personal liberty.

The organization applies the libertarian philosophy of the non-aggression principle: that it is immoral and unethical for anyone to initiate aggression against another, whether that's violence, threats or fraud, while self-defense is perfectly justified in response. "We don't hate cops," the website reads. "We believe that no one — not even those with badges — have extra rights."

There are now more than 100 local chapters of Cop Block — "a decentralized project supported by a diverse group of individuals united by their shared goal of police accountability" — across the country, ranging from recently formed chapters consisting of nothing but a solitary guy running a Facebook page with a few dozen "likes" to well-established chapters with passionate members who regularly meet up for nights of public outreach. The parent organization counts a quarter-million followers on social media and tens of thousands of subscribers on YouTube, all commenting on and posting videos from themselves and others, all in the name of transparency.

In late February 2013, a Maryland college student was roughed up by Baltimore police officers after the cops noticed he was filming them making arrests on the street.

"Look at me," one of the officers can be heard screaming in the video. "Do you see the police presence here? You see us at all? We're not fucking around, do you understand? Do not disrespect us and do not listen to us. Walk away and shut your fucking mouth or you're going to jail." The student asks if he's committing a crime. Doesn't he have freedom speech?

"You don't," the officer responds. "You just lost it."

Videos like this and others pop up on Reddit — there's a sub-Reddit called Bad Cop, No Donut that collects stories and videos of police abuse and crimes — and on sites dedicated to watching the police. Some of them deal with the issue of recording cops at all, others cover actual crimes captured by bystanders on their cell phones. And those videos have spurred arrests and lawsuits around the country. Those collected images can be all victims have to combat the official version of events that oftentimes happen much differently than they're relayed.

Earlier this year, a man died after police in Moore, Okla., responded to a call about a fight in a movie theater parking lot.

"It was his actions of taking aggressive, physical stance and his refusal to be cooperative with investigations that led officers to believe he needed to be detained," the police chief said at the time about the death. Cell phone video released by the family's lawyer, however, showed five officers on top of the man's unconscious body, with his panicked wife pleading with them, asking if her husband was dead. Witnesses described cops slamming the man to the ground and pepper spraying him before he went unconscious.

On March 26, police in Albuquerque, N.M., said they were responding to an apartment complex after a call about a man who pointed a gun at a kid. Police secured the area, but shot the man to death as he stepped out of the apartment, detailing in their report that he came out with a gun and fired a shot first. A video posted to YouTube soon after the incident showed the guy didn't even have a gun — he was holding a cell phone. The shooting occurred in the midst of massive protests in the city after police fatally shot a mentally ill homeless man for illegal camping just ten days prior.

One month ago in Philadelphia, the city's district attorney's office announced that a police officer there will face criminal charges after cell phone video from last year show the cop beating, cuffing, and forcing an Iraq war veteran into the back of his squad car after the man pointed out to him that the officer made an illegal turn.

There are plenty more examples, but most if not all of them come via videos captured by bystanders by happenstance. They're not looking for trouble or training their cameras on cops at all times; they simply react when something happens. This is in contrast to Cop Blockers, who are more akin to tourists on safari, prodding and poking for a reaction on the streets when the idealistic conversations and philosophical debates are left back at the table and they're looking for something — anything — to get on video.

Pete Eyre is the national Cop Block leader and the main draw at My Friends tonight.

"My goal is to live in what I call a 'mutual appreciate community,'" he says. "We care about each other so we look out for each other, so the idea that there's an institution that steals from people under the guise of protecting them is wrong. Any arbitrary authority that says they have the right to control you, the right to control your life... It's something out of love, not anti-police, but out of love."

Eyre is 33 with a bushy beard and the build of a UFC fighter, but he carries himself softly in conversation, reeling in folks at the table with his relaxed personality. He speaks fluidly and subtly drops dismissive language about cops into the conversation with ease. They aren't police officers, they're police employees. The police don't wear uniforms, they wear costumes. A person isn't sent to prison, they're put in a cage.