Wild Mango flashes its Asian flair -- and a few tired gimmicks too. 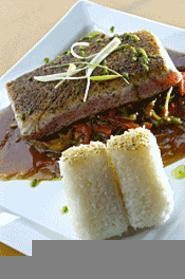 It's been five years since we last turned our tootsies toward chef-owner Jia Wei's restaurant on the northern edge of Great Northern Mall, where the long, lighthearted menu dances to a medley of pan-Asian flavor notes and presentation is a study in culinary whimsy.

Since then, the place has changed names from Weia Teia to Wild Mango (to avoid confusion with its identically named sibling in Oberlin) and survived the construction turmoil of the new Dick's Sporting Goods next door, and is facing the arrival of a barbecue joint in the middle of what was once its parking lot -- an addition that seems almost certain to obscure the Mango's signage. So what the heck, we figured. Might be wise to give the restaurant another look and see firsthand just how Wei and company are holding up.

As you might expect, they seem to have their good days and their bad. And with what turned out to be dismal service (from a well-intentioned but totally clueless waiter) and a handful of lackluster dishes, we'd have to put a recent Thursday-night visit into that second category.

Of course, Wei's cuisine has always been as much about fanciful presentation as culinary precision, and the occasional flubbed dish has been the price that diners pay for the kitchen's eagerness to play with its food. We don't think that this is necessarily a bad trade-off. After all, when Thomas Keller plops tuna tartare into an ice-cream cone, he's called a genius; so if Jia Wei wants to build a fortress of crab salad atop an upside-down martini glass, why should we pooh-pooh it? (Consider the alternative: all the boring, bland, and unimaginative food shlepped over at the mall's food court.)

Still, as approximately 93 percent of all married people in America will testify, even the most amusing anecdote loses some of its punch after you've heard it a hundred times. So it is with many of Wild Mango's "unique" presentations: Those pastry pagodas, rice-and-seafood towers, and fried soba-noodle "antennae" were pretty entertaining five years ago. Today? Maybe not so much. And isn't that the whole damn problem with trying to be different anyway? Do it long enough, and it just isn't different anymore.

So probably the kitchen needs some new visual shtick to keep the experience novel. Because without the distraction of the amusing eye candy, it must be admitted that the occasional culinary misses loom large. And slips like the overdone, gristly beef satay, say, or a dully seasoned strip steak, bested by its sassy side of tomato-cilantro-and-avocado salsa and a passel of sweet-potato fries, suddenly start to seem like deal-breakers.

Then again, maybe we're just grumpy over that evening's unprofessional service, provided by an inexperienced waiter who, while almost heartbreakingly sincere, immediately tipped his hand by asking if we wanted our 'tinis "up" or "down," then repeatedly asked if we wanted olives in our sweet Orange Martini. He also left an impression by working both "Not a problem" and "Awesome!" into the same sentence, without even a hint of self-parody. Dude! Has anyone here ever heard of staff training?

Of course, a restaurant doesn't survive for five years in this tough ol' town without packing some firepower. And indeed, there were some well-prepared dishes, even on this night. Take the new, improved Pepsi Shrimp starter, for example: four delightfully toothsome black tiger shrimp done up in a crunchy cola-based batter, brightened with a tasty dab of red-chile sauce, then perched on the lip of a martini glass. Five years ago, the glass would have been filled with icy Pepsi, putting the crustaceans' crunchy coating in mortal peril. Today, however, it holds a bit of shredded daikon slaw dressed in a tangy blend of lemon juice, sesame oil, and rice vinegar for a far more sensible complement to the shrimp.

The kitchen's nontraditional take on the classic noodle dish pad Thai stood out too, thanks to an aromatic tamarind sauce that sent the flavor notes tumbling toward the sweet end of the scale. A few squeezes of fresh lime provided the perfect citric counterpoint, and the textural interplay of firm, translucent rice noodles, crunchy bean sprouts, smoky grilled shrimp, and crisp red pepper could hardly have been more satisfying.

There was more good news when we dropped by for dinner the following Saturday, not the least of which was that our Thursday-evening waiter had the night off. In contrast, this evening's server was a model of efficiency and poise; with the dining-room assistant making frequent passes with ice water and the restaurant's signature yeast rolls (warm, glossy, sesame-seed-coated ovals, piqued with the slightest hint of peanut butter, scallion, and Asian seasonings), there was time to soak up our exuberant surroundings, done in an eye-popping palette of Chinese crimson, golden yellow, silver, lavender, and black. A crushed velvet banquette here, some glossy enameled tabletops there, and a handful of "flying buttress" booth dividers that look like fins from Buck Rogers' spaceship all added up to an almost dizzying hodgepodge of design that a companion once aptly described as "East meets West, somewhere in outer space."

Of course, when your Asian herb-crusted chicken breast comes to the table sporting a set of crisp soba-noodle antennae, à la Ray Walston in My Favorite Martian, suddenly the decor doesn't seem so random after all. But more important, perched on a substantial cylinder of short-grained rice, high above a celadon pool of complexly seasoned curry and baby bok choy, and stroked with a wisp of dark, cilantro-based pesto, the chicken tasted so delicious that it made us shiver.

An ample slab of seared yellowtail tuna moved us too, with its tenderness and pointedly peppery flavor notes. Beneath it, a bed of stir-fried oyster mushrooms, bean sprouts, finely julienned green beans, and baby bok choy added snap and crackle; two massive triangles of short-grained rice, with a layer of sesame seeds at their apexes, provided the architectural "pop."

While the decor, food, and presentation have remained fairly stable over the past five years, it's nice to see that Wild Mango's formerly scrawny wine menu has apparently hit a growth spurt. The international list now includes more than 100 options by the bottle and 18 by the glass. Most bottles are pegged at between $25 and $55; of course, that makes the inclusion of a 1995 Opus One, priced at $450, seem a strange call. (Not surprisingly, Jia says he hasn't sold any so far.)

Homemade dessert options range from the mundane -- including an understated mango-orange cheesecake, garnished with mango and strawberry coulis -- to the fabulous, as in the dome of frozen chocolate-Grand Marnier mousse, cosseting a scoop of vivid ginger/ black-truffle ice cream.

It's as we said five years ago: What Wild Mango lacks in refinement, it often makes up for in enthusiasm and flair. If some of that flair is growing a little stale, it will be Jai Wei's challenge to freshen it up. After all, with his artful eye and all the flavors of Asia at his disposal, there's almost no end to the possibilities.