Hank III may be a drug-crazed hellion, but he's also something more. 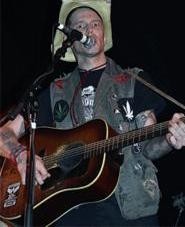 Three of us shuffle, single file, to the back and sit on an L-shaped sofa. Hank occupies a low stool, a locked tackle box in front of him.

He wears a sweat-stained T-shirt that nicely complements his haggard expression. What does one say to country royalty?

My friend just blurted it out. I don't know if we had even finished introducing ourselves before he dropped the C-bomb. But that was Bill Bird for you.

Bill was always larger than life. A former Navy SEAL, he was the kind of man who thought it fun to sprinkle gunpowder in the bottom of an ashtray. He looked like Hulk Hogan, down to the inflated chest and goofy mustache.

But that was before cancer.

He'd lost a lot of weight and was a shadow of his former self. But his spirit remained strong -- something he'd prove by playfully twisting your arm until you submitted.

And now he was telling Hank Williams III all about cancer and how he was gonna beat it. How he was gonna have a big party when he was tumor-free. "I'd be honored if you'd play."

Hank, to his credit, agreed to play for cost.

We sparked up and passed him a joint. Bill reached into his pocket and dug out half a dozen OxyContins and morphine tablets he'd been prescribed when he started chemo. He offered them to Hank.

At that point, Hank reached down and opened the mysterious tackle box. Inside was a cornucopia of pharmaceuticals -- hundreds of pills in every possible shape, color, and variety.

Hank thanked Bill for the pills and added them to the collection. As we prepared to leave, Hank passed Bill his phone number and told him to call when he was ready to have that concert.

The concert never happened. A year ago, Bill finally succumbed to cancer. He never would let on he was dying, even as tumors grew around his neck. His body was wasting away, but he was still joking about how he was gonna garrote me and fill my unconscious body with homemade napalm.

And he kept up a conversation with Hank Williams III.

Several times when I'd go over to Bill's house, his wife, Bonnie, would wait until he left the room to tell me Hank called.

Bill never said anything about it -- maybe he thought it would make it less special -- so I never did learn what the two men talked about. But Bill was always more chipper after talking to Hank.

Shortly after Bill died, I called Hank to interview him about a tour that was coming to North Carolina, near where I was working at the time. I wasn't sure how to tell him that Bill had passed.

But when I brought it up, it turned out Hank already knew. In fact, he'd already offered Bonnie his condolences.

A year has passed since then, and there's one thing I keep wondering: Why did Hank keep in touch with Bill, someone he'd met only briefly? So when I saw that Hank was coming to town to play the Grog, I called to ask.

I didn't get right to it. We talked about his just-released album, Straight to Hell, which ended four years of tussles with his record label. We also talked about Father's Day; Hank didn't call his dad, nor did Hank's son call him.

Then I finally asked what I'd wanted to ask all along: What drew you to Bill Bird?

"He was tough as nails," Hank said, "and good at not letting it get him down, even though he was facing death in the eyes." Hank Williams III: Do his pupils look dilated to you?