A strong-arm play against a new gay bathhouse. 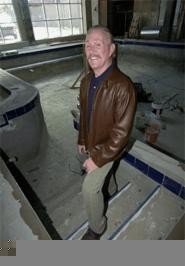 Hanging on the basement wall of the former Flex Cleveland at West Ninth and St. Clair were the rules of the bathhouse. One of those rules: Don't try to explain it to straight people.

Operators of gay bathhouses take that as gospel and notoriously avoid press, especially mainstream press. That was Charles Fleck's intention, too, until he got a call last spring from Scene. Fleck was in the midst of a multimillion-dollar transformation of an abandoned Greyhound facility at 26th and Hamilton, hoping to create the world's greatest bathhouse.

That a "millionaire real-estate investor" would bet on the blighted area caught The Plain Dealer's attention. On May 25, Fleck found himself on the front page of the daily, in a story highlighting his $7 million investment.

But that high-profile mixture of money and gay sex proved too tempting to those who wanted a piece of the action.

Earl Pike, director of the AIDS Taskforce of Greater Cleveland, and Bill Tiedemann, who directed HIV programs at the Cleveland Department of Health until July, are friends. Before he stopped answering questions, Tiedemann said that The PD story caught both men's interest. So Pike decided to visit Fleck, where he talked about the "great relationship" his group had with the city's other gay bathhouse, Club Cleveland. But he expressed "concern" that Fleck had "not contacted" him regarding the club's operation and how the Taskforce fit into it.

In 2005, Club Cleveland contributed $2,000 to the Taskforce, according to manager David Peifer. Co-owner Ray Wolf kicked in another $1,000.

Fleck, by contrast, closed his old Flex Cleveland bathhouse in 2003 and hadn't contributed since, though he continued to operate five other clubs throughout the country. He's been known as a generous philanthropist elsewhere, but Pike describes his Taskforce contribution as "so small it doesn't make a difference."

Pike clearly wanted that to change. "I wasn't hearing that we were going to be community partners," he says. "I wanted to know his business plan, out of curiosity. I was deeply concerned there was no conversation with us or with the Health Department."

Fleck says that Pike came to his office with an open hand, wanting him to purchase the Taskforce's HIV testing supplies -- at roughly $6,000 per year -- and dedicate space for Pike's staff in the new facility.

But Fleck had already spent millions and had yet to earn a dime. He wasn't prepared to take on additional obligations.

The men came to no agreement that day, so Pike, Tiedemann, and Matthew Carroll, the city's acting health commissioner, began exerting pressure. They wanted both bathhouses to sign nonbinding agreements with the Health Department, calling for accessible condoms, policies prohibiting drugs and prostitution, and monthly HIV screening and counseling.

The agreements were essentially gimmicks, since these things were already in place at Club Cleveland and Flex's former location. "There's nothing in here we weren't doing already," Peifer told WCPN.

But to the rest of the media, the agreements were somehow cause for alarm. The PD ran a piece on July 16, saying that city officials were "caught off guard" by the new bathhouse. It was a curious assertion, since Councilman Joe Cimperman had aided the development all along. Yet city officials and the media were suddenly parroting talking points that Pike admittedly fed them, implying that the club would be an incubator of illness. Health officials worried that it would "hinder the fight" against sexually transmitted diseases.

"I think it is going to be a big mess in the not-too-distant future," Tiedemann told The PD.

It appeared to be a naked strong-arm play. What the story neglected to mention was that Fleck had planned such safeguards all along, just as he did at his former club. Meanwhile, Club Cleveland was getting a free ride. The only difference between the two clubs was that one was donating to the Taskforce and purchasing its supplies. But Fleck was now being bombarded by his own allies. Pike seemed to be using something he detested -- the media's titillating approach to gay sex -- to force Fleck's wallet open.

When Scene asked Tiedemann whether Fleck had disregarded Health Department directives in the past, he declined to answer. Nor could Pike recall a lack of cooperation.

But when the story broke, Cimperman was suddenly bombarded with "crazy hate calls" from as far away as Oklahoma. "They are absolutely over the top with [anti-gay] hatred," he says.

Not to be outdone, PD columnist Regina Brett jumped into the fray, calling on Fleck to "make sure it is safe for all of us. Give out free condoms. Pass out safe-sex literature. Offer HIV testing."

Then Pike found another issue to take to the media.

One of Fleck's employees, Walter Fisher, was convicted in Florida in 1984 of having a relationship with a boy just a few months below the age of consent. Though Fisher oversees construction, and the club doesn't admit minors, Pike had found a new vise with which to squeeze.

"I called to Florida myself," says Pike, who used the information to prime another round of media reports. "I just thought that was evidence of running in a sloppy way."

Still, Fleck had planned to sign the agreement all along. He was just awaiting legal advice and a chance to negotiate a few small points. Club Cleveland hadn't signed either.

But Pike continued to make it appear as if Fleck were stonewalling. On July 7 he sent an e-mail to Fleck, using the media hype he'd created to bash the new bathhouse once again.

"I was disappointed to see in the Channel 5 news report earlier this week that Mr. Fisher is still in your employment," wrote Pike. "As I indicated on the phone a few weeks back, it doesn't help build my faith that the new bathhouse will be a safe, reputable facility when you employ a convicted sex offender . . .

"I am opposed to the opening of Flex Cleveland until the club has signed an agreement with the Cleveland Department of Public Health that specifies the steps that you will take to maximize the HIV/STD-related health of your patrons," Pike continued.

Fleck signed his agreement on July 27, with the points of contention worked out. Club Cleveland's remained unsigned until August 7.

To Sue Doerfer, the whole affair had nothing to do with health. The director of the Lesbian, Gay, Transgender Center of Cleveland says that Pike approached her to be part of the agreement. She declined, believing he had cooked up the agreement to spur homophobia, then use the pressure as leverage to achieve his demands.

After all, there are scores of adult establishments around the city where sex, both gay and straight, occurs. For Pike to focus on one bathhouse "was sensationalism," Doerfer says. "They were trying to make people freak out because of gay people."