From Brooklyn With Love

The circus traditions of Russia live on in the boroughs of New York. 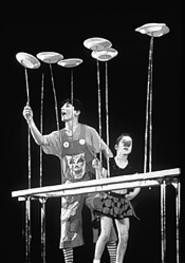 "Slava will tell you his role," says a Russian American Kids Circus spokesperson. "Let him talk for himself." You'd think there's a Cold War going on, the way the children's circus withholds information on its performers. We received no background on 18-year-old Slava Bokhman. He tells us he was treated like a celebrity after a recent Central Park gig. We ask if he gets that sort of attention back home. He shoots back, "What do you mean home? I live in Brooklyn." Another casualty of post-Cold War miscommunication.

The Russian American Kids Circus, a troupe consisting of kids ages 6 to 19, appears at KidsFest (along with snowboarders, an animal expo, and more) this weekend. As far as we can tell, it was founded in New York City, in 1994, by Alex Berenchtein, an acrobat and juggler with the Moscow Circus. At age 11, Bokhman answered an ad in a Russian newspaper. "I had no idea what I was doing," he explains. "They gave me three balls to juggle, and I threw them up at the ceiling and said, 'This is fun.'"

So, what is his role in the circus? "I do what everybody else does," he says. "You're not going to find anyone in our circus that can't do at least five things. I am in almost every number in the show -- juggling, acrobatics, unicycle, flipping."

The original idea behind the Russian American Kids Circus was to gather a bunch of youngsters -- born in Russia, now living in the States -- and teach them Russian circus traditions. It's a disciplined program, Bokhman says. "We worked outside in humid weather. We'd be sweating hot, nearly every single day."

Do kids get tossed, Menudo-like, from the troupe once they reach a certain age, replaced by younger models? "We don't kick people out," Bokhman says. "You can stay as long as you want. There's no age in the circus. This is not a generational circus." Just an old-fashioned, Cold-War-state-of-mind one.