Viktor Schreckengost's creative output will bowl you over. 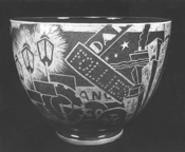 Viktor Schreckengost and 20th-Century Design , the Cleveland Museum of Art's first large-scale exhibition devoted to a living Cleveland artist, doesn't have a valedictory feel at all. For one thing, Schreckengost is a spry 94: He continues to teach part time at his alma mater, the Cleveland Institute of Art, and create watercolors, too. But there is something else, and it has little to do with chronological age. From the whimsical sketch this artist did at nine, of two roly-poly German generals, to the sassy "Jazz Bowl" he made in 1930 to the sleek 1965 Sears Spaceliner bicycle, this art is exuberant and full of youthful good spirits.

Although Schreckengost's talents have been recognized before, this is the first major exhibit devoted solely to his work. In 1958 the Sebring, Ohio native and son of "a common potter" received the highest award given by the American Institute of Architects -- the Gold Medal. This year, the museum is bestowing its own gold medal in the form of this show. Conceived by Henry Adams, the museum's curator of American paintings, in collaboration with Henry Hawley, curator of Renaissance and later decorative arts and sculpture, it includes more than 150 works. Schreckengost's career in industrial design is charted through objects such as bicycles, dinnerware, and pedal cars. There are glazed and painted ceramics such as the "Jazz Bowl." There are also drawings, paintings, and sculptures. The sheer variety is staggering.

One of this show's strengths, though, is the way the work has been brought together; the viewer is made aware of the unity within the variety. Schreckengost himself offers one way of tying the themes of his life and work together: "I could never understand why only wealthy people could have good design." Mass production was not a bane of contemporary life for him; rather, it was a way of broadening democracy and spreading its blessings. In this he was bringing a progressive streak in American political and social thought into the creative arena. With innovations such as "Manhattan" (1933), the first modern mass-produced American dinnerware, and his "Jiffy Ware Space-Saving Design" (1939) -- a collection of pitchers and containers with straight sides, so that they could be pushed up against one another in a refrigerator -- Schreckengost was proclaiming that creativity and good business could go hand in hand. The thing to remember with Schreckengost is that he didn't rely on marketing research when designing. He was an artist with an intuitive understanding of what people needed.

One of the many highlights in the exhibit is the "Jazz Bowl" (also known as "New Yorker"). Now generally regarded as one of the high points of American art deco, it was commissioned by Eleanor Roosevelt to celebrate her husband's victory in the New York gubernatorial race. The piece demonstrates Schreckengost's ability to pare a subject to its basics and then figure out a way to achieve maximum intensity through the simplest means. Here, along the sides of the punch bowl, he has inscribed a series of city scenes that flit by like individual frames in a film sequence. There are champagne glasses, tall buildings, the neon lights of cafés and bars. The blue glaze almost glows from within and adds to the nocturnal atmosphere. In an economical way, Schreckengost is suggesting the excitement of night life. But he uses a skewed perspective that also suggests that life in the big city is not always a lark. As Adams notes, the mood here is not ominous or oppressive -- the only danger is of a hangover, and that's in keeping with the bowl's function.

Intensity achieved through utmost simplicity is a quality we see again and again in Schreckengost's work. Sometimes, he pares away all nonessentials to better concentrate his humor. For example, there are the ceramic animals, in which certain characteristics -- the long snout of an anteater, the bulging eyes of a leap frog -- are emphasized. Or savor his witty version of an overfed politician about to deliver a filibuster. Fashioned from glazed earthenware, this 1949 work is so vivid (and contemporary) that it might make you think of current political figures. There's also a wickedly satirical ceramic piece, "Apocalypse '42," depicting Hitler, Mussolini, Hirohito, and Death as the Four Horsemen of the Apocalypse. The piece ignited controversy at the 1942 May Show at the museum; now it's acknowledged as an American classic.

What effect did World War II have on Schreckengost's art? That's hard to say. He certainly played an important role in the U.S war effort. In 1944 he went to Europe to test the range and accuracy of American radar at the Battle of the Bulge. There is a morose watercolor in this show of a bombed European city. It suggests that while, like many of his generation, he was glad to see the Axis powers defeated, he was also distressed by the destruction that remained after the good work was done. But grief-laden works like this watercolor do not appear often in his creative output. He is more likely to be associated with such joyous semi-abstract works as 1987's "City Jazz," which playfully alludes to his favorite instrument -- the saxophone -- and to abstract artist Piet Mondrian.

The copiously illustrated catalog doubles as a book-length study on Schreckengost. Henry Adams writes with a combination of wit, exuberance, and insight that perfectly matches his subject. "Viktor is a famous artist in the sense that nearly everyone alive is familiar with something that he did, but his name is unfamiliar outside a small circle, and the overall shape of his career is virtually unknown."

Thanks to Adams and this fine exhibit, that is no longer the case. Viewing this show is like taking a stroll through the 20th century with someone who helped shape it.