From R.E.M. to Kimya Dawson, South by Southwest 2008 celebrated indie legends past and future 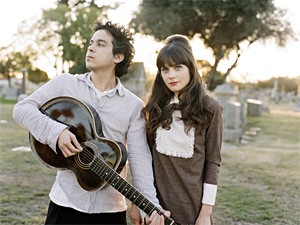 Nowadays, there's really no place for music fans at South by Southwest. If you were at the four-day music fest in Austin last week, it seemed that you were either in a band, working for a band, promoting a band, or writing about a band. Thousands of artists played; I had time to see only a fraction of them. Here's a rundown of what rocked my SXSW 2008:

Best Headliner: It's fitting that R.E.M. played the fest's first big show Wednesday night. The group pretty much invented indie-rock in the early '80s, back when it was called college rock. Never mind that the band hasn't released a decent record in more than a decade — R.E.M. is an indie-rock institution, and a packed Stubb's was there to pay tribute to guys who more or less helped define what SXSW is all about. Their 90-minute show was heavy on songs from the new Accelerate. But the night's biggest hits were oldies like "Fall on Me" and "Man on the Moon."

Best Local Showings: The last time Bay Village singer-songwriter Kate Voegele played SXSW, she wasn't old enough to drink. But this time, she told her audience at Thursday night's Thirsty Nickel showcase, the 21-year-old was taking in everything Austin had to offer. Oddly, she was talking about music, not all of the gutter-dwelling drinking that was going on. But that's Voegele: a genuinely sweet girl, the type who says "You guys are awesome!" repeatedly onstage and talks exactly like one of the characters on One Tree Hill, the tween drama in which she plays a singer-songwriter. In other words, she talks like her fans. Her set was filled with a bunch of cuts from her debut album, Don't Look Away, including "Chicago" and "It's Only Life."

The Black Keys couldn't have picked a better place to play their Friday-afternoon concert than La Zona Rosa. The Akron duo's bluesy garage rock filled the cavernous, garage-like club. The show, which was part of a party Scene helped throw, mixed old material and songs from the new Danger Mouse-produced Attack & Release. The best tracks — "Strange Times," "Oceans and Streams" — already sound warmly familiar in the set. There's a bit more complexity to the music, but nudged against fan faves like "Have Love Will Travel," it's about as soulful as rock 'n' stomp music gets.

Best Label Showcase: Merge Records is home to some of the planet's hippest indie-rockers, including hipster faves Arcade Fire and Spoon. Friday night's label showcase at the Parish was a six-hour marathon of a half-dozen artists, and it was one of SXSW's most solid programs. The first three bands were hit (Portastatic, actually a solo acoustic project from Superchunk's Mac McCaughan) and miss (the Radar Bros.). But once Sweden's Shout Out Louds came onstage, there probably wasn't a more consistent lineup of music anywhere in Austin on Friday night. She & Him featured super-cute indie actress Zooey Deschanel and indie-rock hipster M. Ward, who played a bunch of songs from Volume One. This was one of their first gigs, so they were a little creaky, but Deschanel's charming voice and Ward's plaintive guitar strums brought a calming hush over the audience. Highlights: the spare "Sentimental Heart" and the bouncy "This Is Not a Test." Destroyer, the Canadian band led by the New Pornographers' Dan Bejar, got a later-than-usual start — after 1 a.m. Bejar was in full freak-out mode, stretching and pulling apart syllables and entire words that seemed randomly chosen at times (yes, he's the weird one in the Pornographers). Although it's been making records for a dozen years, much of Destroyer's set was culled from 2006's Destroyer's Rubies and the new Trouble in Dreams.

Best Day Parties: There was a curious dearth of bearded rockers on the streets of Austin on Thursday afternoon. Turns out all the facial hair was at one of SXSW's best parties, hosted by New West Records, home to alt-country acts like the Drive-By Truckers. There may be hipper parties, but none embodies the spirit of SXSW's Americana roots more than this annual bash. Akron native Tim Easton played a set during the four-hour party at Club De Ville, as did veteran singer-songwriter Buddy Miller, who was joined by '60s pop star Johnny Rivers for several songs. But most whoops and hollers (to use a pair of alt-country words) were reserved for the Old 97's, who played a bunch of songs from their blah new CD, Blame It on Gravity. And because this was an alt-country showcase populated by guys sporting ironic bowling shirts and Grizzly Adams beards, the occasionally poppy Old 97's played a strictly twang-filled set.

Saturday's daylong Garden Party at the French Legation Museum was a perfect cap to four days of music — an eight-hour mix of indie-rock legends and buzzed-about hipsters. Dinosaur Jr.'s J. Mascis played an unplugged solo show — loaded with faves like "Get Me" — that still managed to be one of the day's noisiest. Likewise, Sonic Youth's Thurston Moore — performing with the New Wave Bandits — went acoustic, but was still pretty damn loud. The band didn't play any Sonic Youth songs, but all of them still sounded like Sonic Youth songs. She & Him played a slightly looser set than in Friday night's Merge Records showcase (yes, I was stalking Zooey Deschanel all week; no, she didn't talk to me; no, that won't stop me from stalking her next year). By the time Austin's Okkervil River took the stage a little after 6 p.m., the formerly cozy outdoor Garden Party had turned into a rollicking pile of sweaty bodies, as the band performed songs from last year's terrific The Stage Names. Kimya Dawson — the quick-mouthed singer of the hit Juno soundtrack — closed the concert, although most of the audience had thinned out quite a bit. But there probably wasn't a more captivated audience all week.