From Rice-a-Roni to Pheasant

Two very different productions take us from the ridiculous to the sublime. 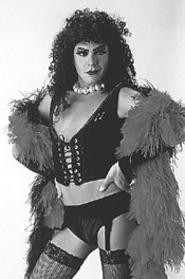 Presently, we have two Cleveland revivals of musicals that premiered in 1973. Both shows are about breaking the emotional and sexual chains that bind us. One is for those who love elegant cuisine and the other is an exhilarating junk-food high.

For those who harbor a secret desire to crash the counterculture, a live performance of The Rocky Horror Show at Beck Center could rate a lot of cool brownie points.

Twenty-seven years ago, a struggling performer named Richard O'Brien, following the "You-Gotta-Have-a-Gimmick" advice of those Gypsy strippers, brewed a batch of Old Dark House horror film clichés, stirred in essence of gay camp from Andy Warhol epics, and flavored it with a rock and roll bubblegum score reminiscent of Grease. The result is a playful panegyric to pansexual perversity.

Two collegiate squares, of the Ken and Barbie/Frankie and Annette school, find themselves trapped on a stormy night in an extraterrestrial haunted mansion where transsexualism, incest, bisexuality, necrophilia, and walking on stiletto heels are all enthusiastically demonstrated like the latest dance sensation. By evening's end, the couple (Brad and Janet) have devoured the forbidden fruit and are left ravished yet rueful.

This carnal variation of the Munsters took off in the early '70s in London, but it flopped on Broadway. Done in a vastly improved 1975 film version, it spawned a midnight matinee cult of ritualized chants and monkeyshines involving squirt guns, rice, and audience members masquerading as characters in the film. The cult is now in its third generation of infantile insanity.

Last Friday, Beck Center was aglow and in a state of capitalistic bliss with packed audiences. The theater has jump-started the original stage show by trading on its movie popularity, selling audience participation kits, and then hiring security guards to make sure no one actually uses them.

Spectators who are unaccustomed to live theater want to treat the performers as though they were their screen counterparts. However, shielding these poor thespians is one Bob Simon as Dr. Frank N. Furter. He effortlessly thwarts the audience's verbal blows with a cutting wit.

Simon is a Cleveland boy who carved a niche for himself in the wilds of Los Angeles. He first donned high heels and corsets for this role back in '93 and has been traveling the world since in various productions as an ambassador of attitude. He uses his considerable powers to try to make us forget there ever was a Tim Curry (originator of the role and star of the movie version). Simon has morphed his mad scientist in the bitch goddess mold. In the great tradition of Mae West, Ethel Merman, and early Bette Midler, he woos the spectators with pure aggression. His performance of leers, petulant put-downs, and Westian body language screams of "love me-fuck you" brashness all the way to the exits. He is anything but a "team player": He wipes the rest of the cast off the stage as though auditioning for a Broadway producer. Only Nina Angeloff's Morticia Addams-like zombie and Jimmy Helms's mad ghoul of a butler survive Simon's blitz. The rest of the cast may as well be Knights of Columbus revelers at a Halloween bash.

On stage, Jenniver Sparano's costumes do for underwear what The Sound of Music did for nuns, making them perky and lovable.

In the strictest sense, Simon could be classified as a "stage hog," but it is only his 1,000-watt narcissism that keeps this 27-year-old ode to the naughty from becoming a passé pink dessert.

If Beck's Rocky Horror is a junk-food junket fueled by irony, bad taste, and unyielding ego, Lakeland Theatre's A Little Night Music is a sophisticated glide, a delicious surprise -- like finding an emerald bracelet in a box of Cracker Jacks. With a fraction of the resources, this tiny theater has outdone such Goliaths as the downtown Great Lakes Theater Festival in a far more human, nuanced production of Stephen Sondheim's waltz-time musical.

Among the standouts are Maryann Nagel and Gregory Violand, a married acting couple who, like a sound investment, seem to triple in assets yearly. Nagel rendered an exquisite Desirée nine years ago in Cain Park's production of Night Music. This is one of those roles that must be nothing less than a perfect balance of enchantress, manipulator, and heartbreaker. Nagel, in a performance of infinitely tender wisdom and pugnacious spirit, set the standard. Now she proves Thomas Wolfe wrong: "You can go home again." She has ripened into a diva in the tradition of Mary Martin and Julie Andrews, turning the audience into adoring acolytes. Violand, her match in every way, sings and acts with piercing wit and skill. The worthy cast includes David Robeano's magnificently tortured Henrik, Joel Nunley's imperious dragoon, Adele Karam's angelically sung countess, and Laurel Posey's sunflower of a maid. Martin Friedman directs with the care of a Sondheim devotee. Choreographer Gustavo Urdaneta adds a detailed and evocative dimension, waltzing the cast with infinite imagination and dexterity.