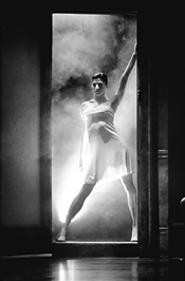 Contact, on tour at the Palace, bills itself as a full-fledged musical, yet if truth-in-advertising rules were strictly applied, it would be labeled a dance piece. That's because it tells its story solely through dance, augmented with only the most minute snippets of dialogue.

However, the work's attributes go far beyond appealing to dance lovers. The show has the lavishness of a Ziegfeld Follies, the comic pathos of a silent movie, and the perfumed Freudian sensuality of an MGM musical dream sequence.

Creator/director/ choreographer Susan Stroman, after her triumph with The Producers, has become the most sought-after innovator of musicals. A few years back, she was at an after-hours club, observing a stunning femme fatale in a canary-colored dress, who was selectively bestowing her abundant favors on various suitors. "She was clearly there to make contact," recalls Stroman. This was Stroman's nugget of inspiration. She joined forces with playwright John Weidman, and together they turned this image into an exploration of relationships at the end of the 20th century. Using popular recordings to reflect the subconscious minds of their characters, they created a trio of "dance plays" with escalating emotional weight, ranging in length from 10 minutes to an hour. Each deals with the concept of how people swing -- literally and emotionally -- in and out of "contact."

"Did You Move?" takes place in a 1954 Italian restaurant in Queens, with the company decked out in costumes wittily evocative of the era. The half-hour piece focuses on a brutish mafioso don who is in the process of terrorizing his gregarious wife into silence. During his lengthy absence raiding the buffet, she hallucinates rapturous dances, first in a Swan Lake-like solo, then a rapturous fling with the headwaiter, and finally a deliriously enjoyable homicide. Stroman finds poignant dance equivalents to Chaplin and Fellini, as the piece alternates between the giddy slapstick of dancing on tables, tossed rolls, and mugging pregnant ladies, and the wistful melancholy of a brutalized spouse. In Meg Howrey's rubber-faced wife, Stroman has found an actress/dancer who projects a pixieish vulnerability that elicits both a chuckle and a piteous sigh.

In the titular third part, Stroman transcends mere choreography and reaches genius, evoking the magnificent passion plays devised by Vincente Minnelli for various MGM musical masterpieces. A suicidal, alcoholic ad executive finds his interest in life restored when, in a dive, he encounters a dancing Aphrodite in a yellow dress. In these roles, Alan Campbell and Holly Cruikshank call up the steamy specters of Gene Kelly and Cyd Charisse, smoldering their way into immortality in Singin' in the Rain. We discover, in Wizard of Oz fashion, that we've been witnessing the protagonist working out his frustrations through a dream, but out of this dance catharsis, the girl in the yellow dress comes to him in real form. This piece lasts approximately an hour in literal time, but its visceral impact should endure for years.

Unlike most tours, there's not the slightest suggestion of compromise with Contact. Every element, from its vibrant ensemble to William Ivey Long's radiant costumes to Thomas Lynch's phantasmagorical Manhattan sets -- including a strutting answering machine -- speaks of a happy coalition of budget, talent, and commitment.

I Hate Hamlet was conceived when playwright Paul Rudnick answered an ad in The New York Times real estate section for a "medieval duplex." The apartment turned out to be the former digs of the Great Profile, John Barrymore, who had renovated the place into his own gothic retreat. Barrymore was heralded as the greatest Hamlet of his generation, a matinee idol whose rise to fame was matched in intensity by his alcoholic decline.

Rudnick used this experience as the impetus to create the story of an insecure TV actor who moves to New York after his show is canceled and reluctantly accepts the challenging role of the Prince of Denmark in a Shakespeare in the Park performance. He finds Barrymore's apartment through a psychic real estate agent, who summons the late actor with an impromptu séance. Barrymore's ghost then proceeds to school the young man in acting and love.

I Hate Hamlet has a great premise, but in reality, it is more of an overextended comedy sketch than a full-blooded play. Ironically, the Play House has seldom seemed so first-rate as in the way it handles this second-rate play. Andrew May, who once again proves he's theater's greatest undiscovered star, essays John Barrymore with the assurance of a slumming archduke relishing a Big Mac. He has the knack of making even a perpetual hangover seem dashing. Just watch his unabashed attempts at dignity as he reacts to a recited litany of the unsavory details of the debased legend's life.