Vince Vaughn and his pack of traveling comics hit the jackpot with improv. 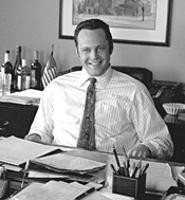 Vince Vaughn has had an excellent year. His last two movies -- Mr. & Mrs. Smith and Wedding Crashers -- grossed $185 million and $205 million, respectively, and rank among the few rays of light to shine on Hollywood this dark summer. So what's he going to do now?

"I'm taking four comics on the road," says the affable actor, who's bringing the Vince Vaughn Wild West Comedy Show to town on Thursday. "I thought it would be fun. And it gives me the chance to connect with the people of America."

The four funnymen were handpicked by Vaughn to accompany him on the inaugural "30 Days & 30 Nights -- Hollywood to the Heartland Tour," as the star refers to his month-long assignment, which starts in California and winds up in Chicago. Vaughn serves as emcee. "I'll interact with the audience," he explains. "And we'll all do sketches and improvisational scenes."

The comedians hail from Los Angeles' Comedy Store, where Vaughn first spotted them, but all have had national exposure. Bret "Captain America" Ernst headlined the Montreal Comedy Festival. John "The Ohio Player" Caparulo has guested on The Tonight Show. Ahmed "The Egyptian Lover" Ahmed has appeared on MTV's Punk'd. And Sebastian "The Hit Man" Maniscalco turns up on Comedy Central's Premium Blend.

"These are all guys on the verge of really breaking," says Vaughn. "A lot of these guys turn to comedy to talk about their lives. There's something very pure about that. They're from different walks of life, but they're all very honest and truthful."

Minneapolis-born Vaughn launched his career nine years ago as smooth-talking hipster Trent Walker in Swingers. A supporting role in Jurassic Park: The Lost World led to a starring gig as mama-lovin' psychopath Norman Bates in Gus Van Sant's ill-fated Psycho remake. It took another five years before Vaughn rebounded with a series of sometimes small but always memorable roles in the frat comedies Old School, Dodgeball: A True Underdog Story, and Anchorman: The Legend of Ron Burgundy. All of which begat Wedding Crashers, the hit comedy about a pair of horndogs who attend weddings just to get laid. "I really wanted to do an R[-rated] comedy," he says. "I grew up with The Blues Brothers and Animal House, and felt like we needed to earn our R, without shying away from the themes."

From the start, Vaughn's spouted those twisty turns of phrase that have become his trademark -- from the countless variations on the "money" theme from Swingers ("No, baby, you're money," "Tell me that wasn't money," etc.) to Wedding Crashers' ode to the sticky sweet stuff: "I love maple syrup."

They oughta serve him well onstage, where his fast, furious, and improvisational comedy will come in handy. "I love doing movies, but it's not the same," he says. "I love getting up and interacting with the crowd. For me to get a chance to go to all these places and get up live at these venues and improv, it's a great feeling."