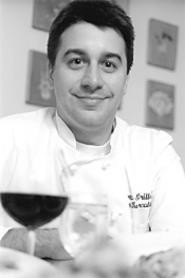 There are chefs for whom simplicity is the highest calling, whose gift is the ability to serve a perfect hard-boiled egg with a pinch of sel de mer and make it seem like a rustic feast. On the other hand, there are chefs for whom too much is never enough, who pile on the high-test taste enhancers -- nuts, cheeses, infused oils -- until a poor diner's taste buds lapse into a coma.

Then there are guys like Mike Turcola, executive chef at Avon's Nemo Grille. On the continuum, his approach comes closer to excess than restraint, and he's not a chef who's content with simple flavors. Just see how he treats humble butter, say, whipping it with a savory blend of garlic, honey, herbs, and lemon. Look what he does to a fine filet of salmon, stroking it with a heady sauce of bacon, paprika, and sour cream. And taste how he jazzes up spears of fresh asparagus, wrapping them in tissues of Parma prosciutto and tweaking them with white truffle oil.

Yet Turcola's pantry rarely gets away from him. Instead, like the maestro of a world-class orchestra, he orders his ingredients with such discipline and insight that they all come together as a single voice. The result is plates that may be busy but are not chaotic, flavor quotients that are muscular but not aggressive, and meals that taste richly satisfying but never stifling.

Achieving this state of harmony is a talent that Turcola has been developing for more than a decade, since beginning his professional career at the Ritz-Carlton in Philadelphia. Once in Cleveland, he donned a toque in the kitchen of Strongsville's Portofino; then, when his bosses opened Vico, an upscale lunch spot on East Sixth Street, he settled in there as executive chef. Still, although he developed a loyal following at Vico for his pastas, crab cakes, and wild mushroom soup, Turcola says he missed the creative challenges of working in a fine-dining venue. So when his former Portofino co-worker, Bob Niemojewski, approached him about joining the Nemo Grille crew, Turcola jumped at the opportunity.

The new restaurant opened in July 2001, in a circa-1850s building in Avon's historic French Creek district, following a thorough overhaul by Niemojewski and his wife, Denise. Today, the old brick farmhouse looks proud and imposing, with crisp cobalt-blue awnings and a sturdy wraparound porch. Inside, however, don't expect to find grapevine wreaths, pierced tin lanterns, or other country clichés. Instead, the restaurant's three little dining rooms and tiny bar aim for a cool, contemporary vibe, done up in khaki, butter, and eye-popping shades of tangerine and eggplant, and united by gleaming hardwood floors. Cream-colored linens look svelte and modern, and little oil lamps, their bases encircled with crimson faux fruits, glimmer on the tables when the sun goes down. Still, we can't help wishing that the owners had gone a little further in their pursuit of comfort and style. As it is now, the odds and ends that decorate the walls -- bits of metal scrollwork here, a bland print there -- are more Target than Pottery Barn. Ambient lighting, from the one overhead fixture in each dining area, is too dim to highlight the food, yet too bright to be sexy. And as the restaurant fills up, the little rooms transform from cozy to cramped, and the air turns stuffy, as if the ventilation system can't quite handle the load.

Nonetheless, issues of interior design seem unimportant when compared to the full-bodied food. Turcola's two-page menu changes seasonally, and his eclectic creations span the globe, from smoky mu shu duck breast, wrapped in sheer crêpes and soused in sassy hoisin, to delicate veal scallopini, sided with tender-crisp tiger shrimp (tails removed -- thank you!) and brushed with a glistening lemon-butter sauce. But if this makes it hard to sum up the chef's style in a phrase or two, a Saturday-night companion came close. "Earthy meets ethereal," is how she put it, describing a strudel of coarsely chopped shiitakes and porcinis, wrapped in shatteringly crisp phyllo and settled in a scant pool of extravagantly rich triple-cream St. André cheese, garnished with translucent chive oil, and topped with a haystack of fried, slivered leeks. We couldn't have put it better.

That evocative balance of darkness and light was characteristic of all the kitchen's best works: dishes such as the mahogany fan of lush sliced duck breast resting on a feather-light wild-rice pilaf, studded with duck confit, dried cherries, and toasted hazelnuts, and finished with a splash of port-wine reduction. Or consider that prosciutto-wrapped asparagus -- served on a chewy slab of grilled bread, drizzled with voluptuous fontina cream, and tweaked with white truffle oil -- for nonstop luxury. Then there was that slyly composed grilled salmon dish, a riff on good old chicken paprikash: From the yin of the indecently moist filet, settled on velvety, mustard-and-tarragon-scented spaetzle, to the yang of the rich bacon, paprika, and sour cream sauce, the clever creation proved that the whole can be more than the sum of its parts.

Even dishes that fell short of perfection were still very good. We murmured our appreciation of our grilled, sliced hangar steak, served beside a stack of green beans and a snowball of homey mashed redskins, in a gloss of roasted shallot-and-burgundy reduction, even though the beef was somewhat tougher than expected. Turcola's signature crab cakes -- plump with real meat, not bready filler -- had a fine golden crust and a sweet nuttiness, although their delicacy was somewhat at odds with the peppery tomato-cream sauce on the pasta beneath them. And another signature dish, farfalle in a vodka-rosé cream sauce of surpassing complexity, was so profoundly savory in its own right that a breast of grilled chicken, settled on top, suddenly seemed irrelevant.

The menu's imaginative à la carte salads, though, could scarcely have been improved upon. A plethora of goodies such as dried cranberries, toasted pistachios, matchsticks of green apple, shaved red onion, and a creamy Gorgonzola dressing made the hearts of romaine salad a standout. An artfully arranged grilled-asparagus salad -- with spokes of smoky asparagus and astringent Belgian endive radiating from a field of assorted lettuces -- looked like a still life, but jumped off the plate with the crunch of toasted hazelnuts and the zip of its orange-tarragon dressing. And, perhaps taking its inspiration from the humble omelet, a big spinach salad was an inspired confluence of warm bacon dressing, hard-boiled egg, and buttery bits of fried potatoes.

To complement the assertive food, wine steward Tim Pevic's international wine menu leans heavily toward fruity, exuberant New World varieties (in bottles, half-bottles, and by the glass), typically in vintages and styles seldom seen at the neighborhood grocery store. Of course, such exclusivity carries a price tag: Although the restaurant's markup appears relatively modest, most of the whole bottles still check in at more than $30, and among 13 distinguished cabernets, for example, diners will find only two choices below the $50 mark. Still, savvy imbibers don't need to peel off the benjamins to score a winner. In our case, a bottle of G-S-M (a blend of Grenache, Syrah, and Mourvédre grapes), from the "Epicurean Collection" of Australia's Rosemount Estates, proved to be a sheer delight, and with its massive body, silken tannins, and smooth, perfumed finish, it seemed worth every cent of its $34 tariff, especially when poured into fine Riedel stemware.

Desserts -- some of them homemade, some purchased -- are brought forth on a tray at meal's end. After such robust dinners, we had trouble working up much enthusiasm for such potentially cumbrous sweets as almond cheesecake and chocolate-rum torte, but cool vanilla crème brûlée went down easily, and fresh strawberries in champagne zabaglione were sophisticated, yet appealingly light.

Of course, hardly anything on Nemo's menu is what you'd call simple fare. Then again, sometimes a little fuss is just what we had in mind.