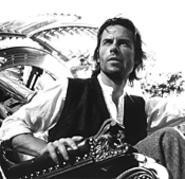 Science fiction can wow us with gadgetry, but only the truly ambitious stuff lights up our imaginations with disturbing and unshakable aberrations, be they incredible shrinking men, 50-foot women, or Sting's winged panties from Dune. In this vast genre, it figures that the ultimate human construct -- time -- proves most unsettling of all, its myriad mysteries second only to those of true love. Not coincidentally, the metaphysical double whammy of love plus time informs the best time-travel movies, from Nicholas Meyer's wonderful Time After Time to Jeannot Szwarc's glorious Somewhere in Time to James Cameron's kick-ass Terminator flicks. Ably bridging the estimable gap between Victorian romance and techno fear, director Simon Wells's The Time Machine delivers a thoughtful what-if for the heart as well as the mind.

An adaptation of H.G. Wells's 1894 tale and a remake of George Pal's 1960 sci-fi classic, this new Machine (scripted by Gladiator's John Logan) is fully retooled for today's increasingly impatient, time-conscious audiences. Trimmed down -- somewhat woefully -- are the author's fervid conjecture and the campy beat surrealism of Pal's mostly faithful reading. But happily, in their stead, we get a fresh take on the material, fortified by the sort of presumption only family would foist upon the work of a forbearing forebear. While neither as eerie as his great-grandfather's nor as endearing as Pal's, Simon Wells's effort is elegant and exciting, weaving new and relatable strands of heartache and social chaos through its snazzy, effects-laden fabric. As with the best science fiction, it makes us question who the hell we think we are.

The original story's enigmatic Time Traveller is now called Alexander Hartdegen (Memento's Guy Pearce), and -- for no good reason -- he's been transplanted from giddy London to some lovingly rendered tableaux of wintry old New York. Also unlike in the original, the obsessive inventor is no longer sexless; he's in love with a perfunctory blonde called Emma (Kiss Kiss Bang Bang's Sienna Guillory). Cheered on by his frumpy associate, Philby (The Full Monty's Mark Addy), and micromanaged by his doting housekeeper, Mrs. Watchit (The Winter Guest's Phyllida Law), Alexander bustles off one night to propose to his sweetie. Unfortunately, Emma gets so turned on by her new moonstone ring, she chooses to struggle with an errant robber (Max Baker) and ends up dead in the snow at the end of a lovely crane shot. Cue misery, cue Alexander's left brain, cue the 20th century.

Four years pass, and Alexander horrifies the delicate Philby by growing a beard. Even more alarming, he fills an impressive array of chalkboards with scientific gobbledygook, the better to design a huge, beautiful food processor that will allow him to travel backward in time and do the Emma thing minus the death thing. His Time Machine works perfectly -- and it's a luminous marvel of design -- but our hero soon learns he can't change the past. Dismayed, he ventures into the future, and we're privy to plenty of CG time-lapse work, best described as neato (and yes, Pal fans, the dress shop has a cameo). Dilly-dallying in 2030 and 2037 to observe mankind doing arrogant, destructive things to Earth and the moon, Alexander encounters Vox (Orlando Jones), a sarcastic hologram who's the wisecracking repository of all the world's knowledge. Give it up to casting director Mindy Marin for knowing exactly how to tap talent.

It's in the distant future -- the year 802,701 to be exact -- that the story takes its boldest strides toward adventure (which is good, since Pearce totally fails at bookishness) as well as social commentary. Basically, Alexander lands in a big botanical garden where a bunch of neo-neo-hippies called the Eloi hang around in their evolved version of the Robinson tree house from Disneyland. He shacks up with a saucy jungle gal called Mara (pop singer Samantha Mumba) and her ragamuffin little brother, Kalen (Omero Mumba), but soon enough they're all plagued by nightmares. Most likely this is due to the evil, scampering subterranean dudes known as the Morlocks, who enjoy harassing the Eloi with blowdarts. His beleaguered spirit reinvigorated by Mara's beaded halter, Alexander must save the day.

There are plenty of reasons to look askance at The Time Machine -- from a New York populated almost entirely by Brits to future-primitives who learn language from stone storefronts preserved in a tacky shrine. (Given a bit of reflection, it's especially silly to think that humans will still look like humans after 8,000 centuries, but there you go.) Then it wins you over anyway, especially when Jeremy Irons steps in as the creepy, psychic Uber-Morlock, in appearance a low-rent cousin to The Lord of the Rings' Saruman, but in delivery perfectly chilling. When he speaks of our innate "time machines" -- memories and dreams -- we see in a moment humankind's extraordinary potential for wonder, love, and horror, and this high-concept vehicle leaves haunting ripples in its wake.