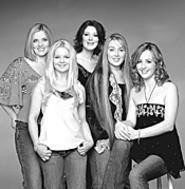 Órla Fallon blushes if you suggest that Celtic Woman has helped globalize the Gaelic ballads her grandmother taught her in the remote woodlands of Ireland. But after the group's self-titled CD came out in March -- with a PBS special on its heels -- Fallon (pictured center) discovered that her homeland's music played well overseas. "It's like soul music that captures different emotions -- whether it's absolute joy or heartbreak," says Fallon. "It's a powerful medium -- almost spiritual -- that touches people's souls."

Still, the quintet isn't shy about arranging its signature harmonies to Irish-born hits, like Enya's "Orinoco Flow (Sail Away)." "The only difference is, in Enya's stuff, she's never used real instruments -- it's all synthesized," says Fallon. "But it's fabulous in a live context. My parents, my husband, everybody says they can feel their feet going."

If anyone's on the move, it's Fallon and company. Their U.S. tour opens in Cleveland this week, followed by 14 more cross-country stops through the middle of August. And there's talk of a November concert at Carnegie Hall. "If that happens," says Fallon, "I'll die happy." Celtic Woman performs at 7:30 p.m. Wednesday at the Palace Theatre, 1519 Euclid Avenue. Tickets are $15 to $50; call 216-241-6000. -- Cris Glaser

Born on the Bayou
Benoit loves the swamp life.

Blues guitarist Tab Benoit was born in Louisiana's bayou country, and telling him to ease up on his smokin' riffs and southern drawl is akin to asking him to chop off a limb. "I'm just trying to play what I feel," he says. "If that's what's happening with me at the time, then that's what comes out." Benoit's latest album, Fever for the Bayou, is a tribute to his swampy homeland, a sweat-drenched testament to the region's musical legacy -- as well as to his own burgeoning skills. "I have all this music that came before me to look up to and learn from," says Benoit, 37. "So many styles of music were born here, but everybody has a different twist on things. I look at this as a snapshot of my life through music. I try to keep it honest. If it's not honest, it's not worth the time and energy." Benoit is at Wilbert's (812 Huron Road) at 9 p.m. Friday. Tickets are $12; call 216-902-4663. -- Michael Gallucci

XE Marks the Spot
Guitarist strums on the sidewalk.

Back from shows in Portland, Oregon, and San Francisco, jazz guitarist XE LA dishes out samples from his fifth CD on Saturday as part of Street Beats' free downtown performance series. While he sprinkles in occasional covers (like "Stormy Weather" and "At Last"), the Richmond Heights native will focus on originals from Unearthed, which he recorded with his band XE LA 3io. This weekend's gig is a solo one on the sidewalk. "It's like being on the field, as opposed to being in a lab," he says. "Plus, it's neat to maybe take a couple bucks home and eat." Show time is 7 to 9 p.m. on East Fourth Street, between Prospect and Euclid avenues. Visit www.cleveland.com/sparx for info. -- Cris Glaser

If spinning tribal-house music is a drug, Roland Belmares admits he's on a turntable high during Queer as Folk's Ancient Babylon Tour, which sashays into town Saturday. "Before you know it," says Belmares, "you've had a party with my music without the standard substances." The 19-city tour also brings stars Hal Sparks and Robert Gant from the Showtime series about gay twentysomethings. It starts at 9 p.m. at the Grid/Orbit, 1437 St. Clair Avenue. Tickets are $16; call 216-623-0113. -- Cris Glaser