Several laughs don't stem the mudslide of mediocrity in The Dinner Party. 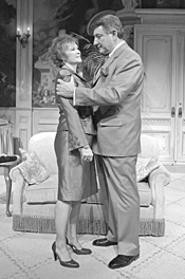 One of Gary Larson's iconic cartoons, captioned "When clowns go bad," pictured two menacing, street-tough circus jesters ready to smash cream pies into the face of an unsuspecting citizen about to come around the corner. Now that's funny. Much less amusing, however, is the moment "When clowns go serious." This happens when comedians or comedy writers suddenly feel the need to take themselves seriously and treat their comic gifts with reckless nonchalance.

In The Dinner Party, now at the Cleveland Play House, the acclaimed comedy writer and playwright Neil Simon, in an attempt to get serious, has clumsily tried to crossbreed a door-slamming French farce with a sentimental paean to marriage -- and both end up in the tank. While there are a number of laughs (how could there not be, with joke-machine Simon at the controls?), the gags all feel too familiar. But more important, Simon has created a completely far-fetched scenario and thrown into it six unbelievable people who behave in remarkably unlikely ways. This tortured context sucks the life from Simon's humor and short-circuits his bathetic forays into the meaning of interpersonal relationships.

Set in a lovely private dining room in an upscale restaurant in Paris (the scenic design by Vicki Smith, featuring a Fragonard-style mural, is delectable), The Dinner Party would have us believe that three divorced couples have shown up to share champagne and Brie with the lawyer who engineered their recent uncouplings. The implausibility of an attorney sponsoring such a volatile get-together is multiplied as the guests arrive one by one, brandishing their characterizations like placards at a political rally. First the men show up, with the Complaining Guy (Claude) meeting the Dumb Guy (Albert) before the Sarcastic Guy (André) makes his appearance. Soon they are joined by the Bitchy Gal (Mariette, Claude's ex) and the Ditzy Gal (Yvonne, who has been married twice to doltish Albert), and finally the Brazen & Horny Gal (Gabrielle, André's former wife). In addition to their cardboard personalities, Simon has Americanized these characters so much that they behave more like Long Islanders than they do French citizens.

The frivolity that is supposed to ensue, as these marital adversaries jostle each other amid their elegant surroundings, is throttled by too many of Simon's well-known pattern jokes (ba-dah-bump) and some distracting acting jobs. Sure, used-car-lot owner Albert is supposed to be a bit of a dim bulb. But the way Steve McCue plays him, if you dressed Albert in overalls, handed him a wrench, and extended his vowels a touch, he'd be a dead ringer for Goober on The Andy Griffith Show. Predictably, Simon makes fun of Albert's rented tux and his inability to talk with his mouth stuffed full of crackers. Albert falls instantly in love with popular novelist Mariette, who is given a teeth-gnashing, ever-grimacing, community-theater turn by Mary Gen Fjelstad. And joining them in their Simonized misery is Kevin Hogan (as wannabe novelist/bookstore owner Claude), who whines constantly and, for the most part, unamusingly.

Fortunately, the other half of the cast acquits itself quite well. David Brummel is a dapper and icily witty André, a polished entrepreneur who can cut anyone down in a heartbeat (commenting to antique-bookseller Claude on a work of literature: "Of course, I should never judge a book by the man who dusts its cover."). Derdriu Ring gives Yvonne a sweet vulnerability, even when faced with undeliverable and indecipherable lines such as "Your eyes would grit your pupils." And as the last and most pivotal guest, Cynthia Darlow brings a fresh edge and an odd dignity to Gabrielle's role as the desperate puppeteer of the evening's events.

The ultimate responsibility for the unevenness of this production must be handed to director Peter Hackett, the Play House's artistic director, who is heading to Dartmouth later this year to be a theater prof. Evidently, Hackett is already spending considerable time developing his classes' syllabi, since the play's pacing feels slack from beginning to end.

During the last third of this 110-minute, intermissionless mélange, Simon clearly intends to set the humor aside (ha!) and concentrate on The Meaning of Relationships. So he has his characters participate in a game, orchestrated by Gabrielle, that is meant to reveal each person's true and glorious nature. Regrettably, the game is forced ("What's the nicest thing your ex ever did?"), the participants' observations are pat (Mariette is living out Claude's authorial dream! He's jealous! Sacre bleu!), and the play awkwardly stumbles to its conclusion amid fake tears and unmotivated reconciliations. Only André gets it right by noting, as he blows this French pop stand, that "Tonight has been an embarrassment to human behavior." If only he had said that earlier, we could all have happily followed him out the door.