Kevin isn't the only thing Spacey in this overlong death-penalty drama. 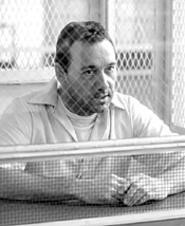 Right-wing pundits will be coming out of the woodwork to holler about this one. Bad enough, they'll say, that The Life of David Gale attacks the death penalty; it also features a caricature governor of Texas with big ears and a familiar, scripture-quoting smirk. There's a character who notes that 73 percent of all serial killers vote Republican. Also on display is ample mockery of Texans for their tough law-and-order stances, mud-splashed pickup trucks, cowboy hats, and tendency to build churches and prisons more frequently than Starbucks branches. The one Southerner not from Texas is a sleazy Louisiana attorney with strange-looking teeth and a propensity for cornball metaphors about cotton and crawdads. Surprisingly, scribe Charles Randolph (a former evangelical missionary making his feature screenwriting debut) is a Texas native. He seems to have issues.

If you're a liberal looking to shoot some fish in a barrel (metaphorically speaking, of course -- wouldn't want to offend PETA) after the next antiwar march, some of this stuff should give you some good laughs. Unfortunately, the film's not a comedy, and once the conservative-bashing wears off, the alleged thriller elements kick in. Too bad that for you, the viewer, there's still another hour to go.

The title is intentionally ironic, or so a generous assessor might assume: Philosophy professor David Gale (Kevin Spacey) is, in fact, about to die, and the movie deals with the details leading up to and surrounding his imminent execution by the state. Hoping to at least clear his name before he dies, Gale has specifically requested workaholic female reporter Bitsey Bloom (Kate Winslet, bravely attempting to dignify such a silly name), due to her recent article about kiddie porn, in which she kept an open mind about the perps. She gets three visits with him on Death Row during his last week -- days are counted off by onscreen titles, which, among several other coincidental similarities, like a mysterious videotape, brings to mind The Ring, sans ghosts or anything else that might be interesting.

Like Clarice Starling going to interview Hannibal Lecter, Bitsey starts off hoping to probe the mind of a madman -- in this case, one accused of raping and murdering a comely co-worker named Constance (Laura Linney), from the same anti-death-penalty crusade organization he worked for -- oh, the irony! But David Gale is much cuddlier than Lecter, and Bitsey almost instantly comes to believe his side of the story, mainly because we get to see it onscreen in flashbacks cued by spinning cameras, montages of hand- and chalk-written buzzwords like "envy," "pain," and "deranged," and of course freaky music.

Gale's is a sob story to rival Irish author Frank McCourt's, as seen in David Gale director Alan Parker's last film (Angela's Ashes). Having initially rebuffed the sexual advances of a hot grad student named Berlin (former Tomb Raider spokesmodel Rhona Mitra), Gale changes his tune after much liquor and the knowledge that the spicy lady has been expelled, thereby no longer representing forbidden fruit. She likes it rough, or so it seems; actually, violent lovin' is all the better to make up phony rape charges with. Gale loses his wife and his job, starts drinking scotch more often than before, and proceeds to immerse himself more fully in the anti-death-penalty crusade with Constance, though even the "liberal" folks working with them aren't fond of having an alcoholic and accused rapist on board.

So now he stands accused of murdering Constance, and only Bitsey, who's described by her intern as "Mike Wallace with PMS," can uncover the truth. It's not that hard. Could the scary cowboy who keeps skulking in the shadows possibly have had something to do with it? Could you have figured the whole thing out already from the moment you first saw the trailer? If not, maybe the constant foreshadowing, or knowledge of the way "surprise twists" generally work, will help. Provided you're still awake, you should have the whole thing figured out way before Bitsey does.

Love him or hate him, Alan Parker has a reputation as a visual stylist, so it's a little surprising to experience his taking the helm of what appears to be a no-frills job for hire. The press kit, written entirely by Parker himself (concentrate on the film next time, dude!), declares that he loved the script and persuaded producer Nicolas Cage to let him do it, but there's very little of his trademark showiness here, save for a few upward angles toward blue skies or the aforementioned spinning transitions into Spacey recollections.

Actually, a little more experimentation might have gone a long way here. Part of the problem is that Gale's tale is so much more interesting than Bitsey's pieces that we lose interest when the film shifts to the latter. Interspersing the two together throughout would have maintained audience interest a little better. That, and hacking out about 45 minutes and a couple of the fake climaxes; there's simply no reason this movie should be more than two hours long. Let someone else live out David Gale's life for that long, because the rest of us have our own to lead.