The day voters actually smartened up. 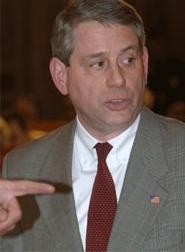 Like many area politicians, Cleveland Councilman Mike Polensek is tired of watching gamblers -- including his own ma -- take their bankrolls to Ontario, Pennsylvania, New York, and Michigan. And with Ohio shedding jobs like a leper, Polensek thought this might be the year voters would finally approve casinos.

Then voters did something he never could have predicted. Something drastic.

Many gaming supporters, himself included, voted against Issue 3 simply because it would have handed a monopoly to two wealthy developers, Forest City and Nautica Entertainment. "That's what sunk 'em," he says.

Polensek swears that casinos eventually will come to Cleveland, even though Ohio voters have turned down three straight proposals to legalize gambling. It will just take a rational plan, he says -- one that uses the lakefront or the river, promises union jobs, benefits the whole state, and doesn't grant Sam Miller the inalienable right to heat his house by burning $100s. "We're gonna vote for this so we can make millionaires billionaires?" Polensek asks.

Despite a $20 million campaign, the constitutional amendment lost handily, raising the question of whether backers should have done something else with the money, like start a bar tab or decamp to the craps tables in Windsor.

Paperwork tiger
Now that state Senator Marc Dann (D-Liberty Township) has been elected attorney general, he's found himself in an odd position: He might have to hire a lawyer to defend the state from a lawsuit filed by . . . Marc Dann.

A day before the election, Dann sued Ohio Bureau of Workers' Compensation CEO William Mabe to force him to release an audit performed by the scandal-plagued agency. Dann is trying to determine whether administrators gave sweetheart deals to politically connected employers.

"I'd have to hire outside counsel to represent them if in fact it was still pending when I took office," Dann said last week. "I think the resolution should be: They should give me the records, then we'll dismiss the lawsuit."

Dann established himself as an AG candidate with his persistent probing of Coingate, much of it accomplished by shaking paperwork out of reluctant officials. In the last year and a half, Dann filed more than 200 public-records requests, he says.

"I'm gonna cut down on the number of public-records lawsuits dramatically when I take office," Dann says. "As intriguing as suing myself sounds, I don't think I want to."

Mistake across the pond
Last month, NFL owners voted to play two regular-season games a year outside the United States, starting in 2007. Doing so means that teams will have to give up a home game every 16 years, which insiders believe is well worth a chance to finally show the French how to play defense.

Last week, the BBC reported that the United Kingdom -- where Browns owner Randy Lerner keeps his good football team, Aston Villa -- had emerged as the front-runner to host the first meaningful game played off the North American continent. The Brits are scrambling to finish renovating 80,000-seat Wembley Stadium and have begun clamoring for a matchup between the Browns and Tampa Bay, whose owner, Malcolm Glazer, has been dubbed "The Leprechaun" for his hostile takeover of iconic Manchester United.

Still, Kirkwood says, the Browns have a "sizable" fan base and are one of the few NFL teams to have their own English fan club. "They would stir interest," he says.

Doesn't hurt, either, that Lerner's been so well received. The Sun tabloid has practically anointed him the anti-Glazer, "not afraid to use his vast wealth to buy success for his sporting obsessions." When he bought Aston Villa, the paper even quoted WKYC's Jim Donovan as saying of Lerner: "He has turned the Cleveland Browns into the Cadillac of the NFL." (Lost in the translation was that Donovan was referring to a 1973 Caddy on blocks in a guy's back yard in Lorain.)

But an inquisitive visitor to Aston Villa's fan site, where users can post messages to a Browns Backers forum, quickly deduced the truth after the team's recent loss to San Diego:

"Are they called the Browns 'cause they're s**t?" he asked.

That would be correct, good sir.

A day late, $8 million short
Except for a few minor snafus, last Tuesday's election went smoothly. But success didn't come cheap. The county spent $8 million over its $1.9 million budget to run the election.

Still, some things at the Board of Elections -- which makes the drive-through at Taco Bell at 4 a.m. look organized -- never change. Among the extra costs was $2.3 million spent on postage for informational mailers sent to voters.

Punch got ours on . . . Thursday, two days after the election.

Bait and switch
When Meijer's bought a circular in the Mansfield News Journal advertising its Veterans Day sale, one deal seemed too good to be true: 30 percent off on a 30 Gb iPod, regularly priced at $249.99. The coupon was only good for November 10, starting at 6 a.m.

One customer, eager to beat the crowds, arrived at the store at approximately 6:01, anxious to be the first in line. But when he arrived at the electronics department, he was told there weren't any left. "How is that possible?" the customer asked, looking around the empty store.

The saleswoman responded that despite the fact that the circular had gone out to approximately 70,000 people, the store had only received . . . um . . . two iPods.