The uniform is lingerie, but the play ain't delicate 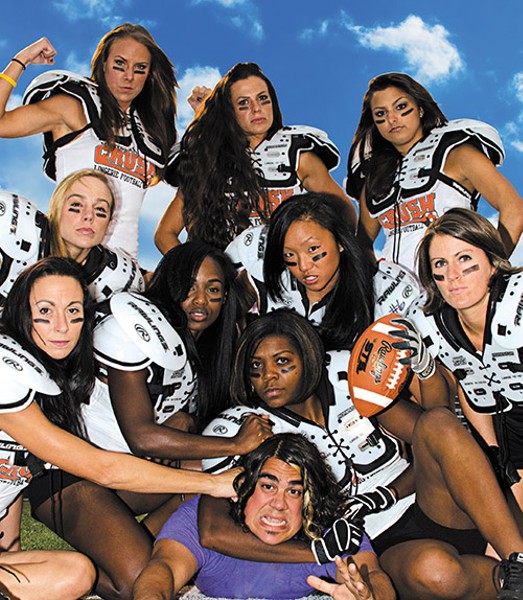 The smack of football pads — a dull thunk in the sonic neighborhood of a fender bender — is gender neutral and decidedly unsexy. Quarterback Abbie Sullivan takes the snap, jackknifes straight back, and delivers a perfect spiral into the hands of an open receiver camped 20 yards downfield. A chorus of hits rings out at the line of scrimmage as the backfield burns down their adrenaline tanks going for the end zone. By the time the play is whistled dead, a cornerback is still wrapped around the legs of the ball handler, working to pull her overboard.

High above, the stadium lights of a local high school fend off a pitch-black sky swollen with rain showers. Another snap, another page from the playbook unravels.

The prep is for Friday, when the 20 women who fill the roster of the Cleveland Crush will put on half as much clothing and swap the practice field for Quicken Loans Arena. On that evening, before the uniquely trained eye of MTV2 cameras, the Crush will cut the ribbon on its inaugural season in the Lingerie Football League with a battle against the Baltimore Charm. According to the vagueries of Vegas, Baltimore is favored by six and a half.

Apart from betting lines, pretty much everything about the Lingerie Football League leaves little to the imagination. Now in its third season, the LFL pushes a brand of football that draws a mostly male audience (you were expecting schoolgirls?) with the promise of full contact and players that look like they stepped out of the Thunderdome's cheer section. The standard-issue getup: helmets that make small priority of actually concealing the player's face; shoulder, knee, and elbow pads; plus garters, sparkly bras, and booty shorts. That's it. The pre-game rave-ups and promotional materials are Maxim cover spreads breathed to life by club beats, with the league's standouts gyrating and shooting sexy daggers into the camera—not moves Colt McCoy could muster.

If most organized women's sports market their sex appeal on the sly, the LFL is openly fishing the waters. And that garish honesty has drawn prudish ire, eye-rolling dismissal, and perhaps an unfair rep as a holding pen for reality-TV wannabes, models, and other aspirants trying to start the clock on their 15 minutes. The league maintains that fans come for the beauty, then stay for the action – the football action, that is.

Keeping the fans in the seats is key; the league has pulled out of cities where attendance and enthusiasm were low. The big question mark hovering over the enterprise here is whether a rust-belt burg — where the gridiron is holy ground — will take football spiked with a heady dose of skin seriously. The Crush is gambling Cleveland will appreciate the balance.

Hell, even the players took some convincing.

"I saw the videos online and I didn't know what to expect," says linebacker Skye Leary, a tomboyish 29. "I thought it would be makeup and spandex. I'm not blond hair, double D's. I'm a flat-chested Irish Catholic from Cleveland."

Although she bides her office hours working in sales, Leary isn't new to knocking heads: She hails from a family of rugby players and has been playing since college. When she heard about the Crush, she was hesitant at first because of the sexed-up vibe. Once practice began, her concerns wilted.

"A lot of people don't really know what the league is," she says. "I try to explain, 'I don't wear a thong. I'm not prancing around in high heels,'" she says. "Yeah, it's hot girls in underwear, but we're doing something athletic and competitive."