A Nigerian nerd chases his dream in the well-acted, uneven Jump Tomorrow. 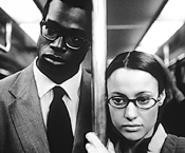 So why is it that every time they make a movie about a nerd, the character in question is always white? What's Hollywood trying to tell us? Caucasians have a corner on the market in failing eyesight, office jobs, and undernourished physiques? Or is it legitimately a white thing -- how many blacks and Latinos, for instance, maintain websites devoted to nitpicking the details of that new Star Trek TV show that's coming in the fall?

Someone must have cried discrimination, for Jump Tomorrow gives us a Nigerian American nerd and puts him front and center. In the time-honored movie tradition, of course, he's actually a good-looking actor in fine physical shape, forced into starchy business attire and glasses ("I don't think my face makes much sense without my glasses"). But the actor in question, in real life an animator for MTV named Tunde Adebimpe, is good enough that he makes you believe it. It's even possible to imagine him donning Vulcan ears on his day off.

Adebimpe is George, a shy guy soon to be joined in matrimony with a prearranged bride, courtesy of his uncle. George can't even bring himself to smile about the pending nuptials, even though all the evidence indicates he wouldn't be too good at obtaining a spouse if left to his own devices. So distracted is he that, when he shows up at the airport to meet his fiancée, he discovers that he's a day late and she's already flown up to Niagara Falls, where the ceremony is to be held.

Then a welcome distraction arrives, in the form of Alicia (Natalia Verbeke), one of those feisty Latinas who can liberate any uptight spirit. Being painfully shy, George manages to resist her charms (despite her apparent power over ladybugs) -- but not before she's invited him to a party. Gallant chap that he is, George refuses, at least initially.

Meanwhile, at another terminal, a love story of a different sort is unfolding. Romantic Frenchman Gerard (Hippolyte Girardot) is proposing to his girlfriend and has hired a brass band for the occasion. If she said yes, there'd be no wacky foil for George to encounter later on in the bathroom, so she swiftly exits, leaving George to comfort the sobbing Frenchman and haul him to Alicia's party that night, either as an excuse to attend or as a way of getting rid of him.

And since the story is only beginning, what would the party be without a disaster or two to kick things into gear? Alicia, though very happy to see George, soon utters the word "boyfriend" in reference to another guest, causing every subsequent word she says to sound like nonsensical buzzing (a clever sound effect). Meanwhile, Gerard gets drunk and prepares to jump off the roof of the building. Though hardly the most suave negotiator in the world, George has to talk him down and eventually does so, by telling him that if he still feels the same way when sober, he can "jump tomorrow." Gerard accepts this logic with relative ease, and the next day, in gratitude, he insists on driving George to Niagara Falls for the wedding. Niagara Falls, we are told, is the capital of both love and suicide of America -- one of many attempts in this narrative to link marriage with self-destruction.

Also making a journey of her own is Alicia, with her boyfriend, Nathan (James Wilby), an intellectual hippie Brit, who's the sort of fellow who spontaneously starts meditating transcendentally in the middle of a cow pasture. The two are hitchhiking up to Canada, since Nathan doesn't believe in vehicle ownership, and if you think they'll repeatedly run into George and Gerard, well, duh.

While the acting is superb across the board, especially from Adebimpe, and the sets wonderfully garish (including bright yellow roller coasters and a surreally kitschy love motel), the plot of Jump Tomorrow isn't what it could be. It's all too easy from a Western perspective to criticize arranged marriages; given that the bride here turns out to be not so bad after all, a braver choice might have been for writer-director Joel Hopkins to finally endorse the union. But it's clear that he never intends to go there. Exactly why George falls for Alicia is not made clear -- all he seems to know about her is that she looks good, likes ladybugs, and calls him "Jorge," which is somehow irresistible. (He fantasizes repeatedly about starring in a Spanish-language soap with her, an increasingly grating device that nonetheless proves Adebimpe can play macho -- and do a passable version of the Rock's "people's eyebrow" -- if needed.)

Perhaps what's best about the movie is its absolute color blindness. The cast is as multicultural as it can get, with each character hailing from a different country; yet, aside from the film's obvious bias against arranged marriages, nothing is ever made of racial differences in the story's various couplings. Whether feisty Latinas are in fact leading the field when it comes to seducing the repressed may be another issue altogether.