Victor/Victoria is the mummified remains of a once-lively movie. 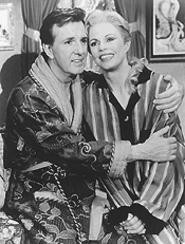 Sitting through Victor/Victoria, half- conscious audiences may find themselves experiencing déjà vu. The wisecracking, mincing, nonsexual homosexuals who express their carnal cravings like arthritic teddy bears may well call up dim thoughts of Jerry Herman's La Cage aux Folles, minus the melody and charm. Its half-baked production numbers—ostensibly steamy evocations of 1930s Parisian pansexual decadence, yet actually a '70s Dean Martin Celebrity Roast of jiggling pulchritude—will undoubtedly remind some theatergoers of their last Vegas night in the church basement. Filmmaker Blake Edwards's dubious attempt to slap a fresh coat of paint on his 1982 film of an ersatz female impersonator's affair with a sexually confused gangster plays as newly minted as an old jalopy from Big Benny's Used Car Emporium.

The last vision at curtain call takes us back to Fantasia. As the heroic cast lines up for audience approbation, we suddenly envision those downtrodden dinosaurs, hopelessly hobbling toward extinction to Stravinsky's "Rite of Spring." Like those doomed creatures, these players have valiantly labored to keep a dying organism alive and grinning.

It was born in the early '30s as a saucy little Teutonic musical concerning a desperate fraulein who, on a Shakespearean lark, impersonates a herr impersonating a frau, all leading to a couple of lewd winks and a polished British remake.

A few decades later, Edwards, like a truffle hound, unearthed Victor/Victoria as a vehicle for his superb wife Julie Andrews, to once again prove she is too sexy to keep romping up and down those Austrian hills with the Von Trapps. It became a gay-friendly, semi-musical surprise triumph for all concerned.

Then, in 1995, like a septuagenarian with a facelift, Edwards was determined to relive old glories all over again, this time live on stage. He has a startling lack of theatrical experience in every department. His major contribution is cinematic slapstick that plays live like a three-legged elephant. The best his collaborators can drudge up is an anemic Halloween masquerade that treats homosexuality, period detail, feminism, and gender confusion with leering condescension.

Edwards's book belongs to that great burlesque house in the sky. Henry Mancini and Leslie Bricusse's minor film songs, which approximated second-rate Cole Porter champagne on screen, are metamorphosed into Kool-Aid on stage. The extra numbers by Frank Wildhorn are fourth-rate didactic diatribes ("Living in the Shadows"). They have the formaldehyde odor of numbers amputated from other shows, dangling here like useless appendages.

This is one of those miraculous occasions where the road show is better than Broadway. The company seems more carefree and less crushed by the cheesy burden that lies on its shoulders. There's a relentless insouciance here, a go-for-broke madness that even the stagehands participate in; in Tide-bright clothes, they dominate the stage almost as much as the players. Mark S. Hoebee directs like a court jester who must elicit laughs or perish.

Watching the radiant Julie Andrews doing her best to be stoically madcap on Broadway, offering up her dignity on the chopping block of her husband's ego, was not only a melancholy experience but a reminder of the adage "You can't go home again."

In Andrews's role, Toni Tennille is newly minted. With a pleasing ragamuffin piquancy and vulnerability, she replaces Andrews's British soubrette with the tang of an Arkansas Campfire girl. Like Cathy Rigby's Peter Pan or Twiggy in My One and Only, she is the unexpected valuable prize in a box of Cracker Jack. She is the evening's Blue Fairy, bringing life to a wooden puppet of a show. Tennille is the only first-run in an evening of reruns. Otherwise, it's just a movie turned into a live yawn.