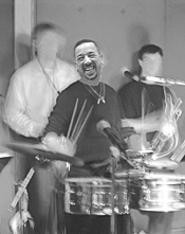 Belinda's is the place where it all began for Sammy DeLeon. "It's my home away from home" the 42-year-old timbalero/bandleader says of the Madison Avenue salsa spot, where giant inflatable macaws clutch bottles of Corona, and renderings of Puerto Rico dot the walls.

Sammy DeLeon y Su Orquesta formed six years ago on the Belinda's stage, with its glittery backdrop that looks like an exploded disco ball. It's still where the 10-piece ensemble practices every week.

Now Belinda's is the site of a new beginning for DeLeon: He'll release his debut album here in a week and a half. Judging from his harried expression on a recent Monday afternoon, this could also be the place where it all ends for the man.

"I'm so stressed. I'm getting choked up here," he says nervously, quickly dabbing at his eyes. "I didn't think it was going to be this hard. It's a lot of pressure. It's building and building. I'm ready to explode already."

Though DeLeon's been making the rounds locally since the '70s, first coming to fame as the music director of the storied Cleveland Latin jazz troupe Impacto Nuevo, this is his first release with the orchestra. The album brings with it high expectations for DeLeon, the man heralded by Latin jazz legend Tito Puente as "the hottest and most innovative young timbalero in America."

"Lately, since Tito Puente did the crossover -- Gloria Estefan, Ricky Martin, Marc Anthony, they all did this crossover -- a lot of American people are into salsa now," DeLeon says. "They want to learn how to dance salsa, they want to have salsa music in their collections --which has taken salsa to another level. In the '60s and '70s, salsa was kept within the Spanish community. Now it's blowing up even bigger. Now is the time to do something, because maybe it will phase out, maybe it won't."

DeLeon's debut could help keep salsa rolling. Driven by his propulsive playing, the orchestra's sound is equally progressive and indebted to salsa's old school. Blending touches of hip-hop and salsa romantica with more traditional themes of empowerment and social strife, DeLeon bridges the gap between the galvanized salsa of yesteryear and more contemporary, hot-under-the-collar sounds. From heavy-breathing, rap-inflected numbers such as "Mujeres" to more uplifting percussion workouts like "Mala Suerte," the album is well suited for both the barrio and the bedroom.

"There was an era where the old salsa was kind of aggressive -- the way I play. Then all of a sudden, it slowed down and turned into romantic salsa," DeLeon explains. "The music was more laid-back and melodic; the lyrics that people were singing, they were more or less the same, talking about 'All I want is this girl,' 'This girl is fine.' They never talked about things that happened in the street. They never sent a message out. The old salsa always had a message. I'm trying to bring that back. Talking about what's going on in the world."

Salsa was birthed in New York City in the '30s by Caribbean émigrés from Cuba and Puerto Rico who were struggling to establish an identity in their new country. Early salsa often depicted scenes of rough-and-tumble urban living; it was the mouthpiece for an oft-disenfranchised people. In the '40s, mambo originated as a combination of Afro-Caribbean rhythms and big-band jazz stylings. It led to a surge in popularity of salsa in the '50s, and paved the way for the music's explosion in the late '60s and early '70s, when New York's Fania All Stars took it to unprecedented levels of success in the States. With a lineup consisting of such big names as Victor Paz, Willie Colon, Ray Barreto, Bobby Valentin, and Hector Lavoe, the All Stars were an instant sensation, famously causing a near-riot at a Yankee Stadium concert in 1973, when close to 40,000 fans rushed the field as the performance began. As salsa's popularity began to spread, though, it became increasingly mainstream, with "romantic" or "erotic" salsa predominating during the '80s.

Such variations don't always sit well with the old guard, and DeLeon, with nearly three decades in music, counts himself among them. But he also knows the importance of connecting with the next generation, which is why the new album includes a taste of rap.

"I'm just trying to bring in the younger kids and get them to follow our roots, because if we don't teach our younger ones how to do it, then it's going to phase out," he says.

Besides, DeLeon can remember his own Lorain youth, when the music first grabbed hold of him.

Though DeLeon's introduction to music came through the choir, it wasn't long before he discovered his calling.

"I heard the timbales, and I fell in love with them," he says. "From 13 years old, I just went on and on. I grew up around music all the time. When I was a kid, bands used to be practicing in the basement, and I would be outside the windows, just watching them. They'd chase me away, and I'd come back and watch them again. Then, if I'd be quiet, they'd let me sit there."

Two decades later, DeLeon plays the same set of timbales he began on. He still gets emotional about his music, but the tears soon give way to the trademark smile that's captured on the album cover.

"I've always said to myself that as long as my wrists are working and my arms are working, I will play music," he chuckles. "Whether I make it or I don't."