Tuesday, November 30, at the House of Blues. 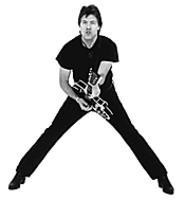 Beauty may be only skin-deep, but bad goes straight to the bone -- for George Thorogood, anyway. But the slide-guitar guru wasn't exactly "Born to Be Bad." Before he started playing the blues, Thorogood played minor-league baseball -- and had it not been for a pivotal concert by John Hammond in 1970, he might never have majored in music.

Influenced by blues legends like Hammond and Hound Dog Taylor, Thorogood formed the Destroyers and released four albums before inking a deal with EMI that catapulted the outfit into the mainstream. In 1982, Bad to the Bone, both LP and single, enjoyed crossover success with the help of regular rotation on MTV. Other memorable highlights for the raucous combo came with guitar-driven covers of John Lee Hooker, Bo Diddley, Hank Williams, and Chuck Berry tunes.

While Thorogood's self-penned tracks have done well enough, it was David Avery's "Get a Haircut" that climbed highest on the Billboard charts, checking in at No. 2 in 1993. Ultimately, the band's semi-raunchy, road-rebel-styled singles became bar-music staples, with sales boosted by the biker community -- a crowd courted by Thorogood long before last year's Ride 'Til I Die. And this year's collection of the act's biggest baddies, Greatest Hits: 30 Years of Rock, is packed with all the memorable -- if often formulaic -- cuts loved by fans old and new. Have "One Bourbon, One Scotch, One Beer," when Thorogood and company destroy the House of Blues this Tuesday. We'll drive.