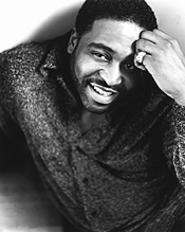 R&B singer Gerald Levert was born and raised in Cleveland, and despite achieving superstar status, he has no plans to ever leave. Levert, who now lives in Newbury, celebrated the release of his new album, G, which came out on March 7, by making several local appearances (he recently signed copies of the album at an in-store appearance at Camelot Music and attended a private party held on his behalf at Bridges, a club in Gund Arena).

"Most of the guys in my band are basically from Cleveland," he says of his roots here. "A lot of my friends are still here. I will be here for the rest of my life. Here or somewhere around here. I just enjoy Cleveland. Everybody wants to be a star in places like New York and L.A., and I'm not into that."

Levert, the son of O'Jays singer Eddie Levert Sr., initially played in a group called Levert with his brother Sean and his cousin Marc Gordon, before releasing his first solo album, Private Line, in 1991. After recording an album with his father (1995's Father and Son), Levert collaborated with Keith Sweat and Johnny Gill as LSG and released an album with them in 1997. Coming on the heels of Groove On (1998), G, which was initially supposed to be released last year but was delayed after Levert decided to rerecord some tracks, is his third solo album. Levert, whose engagement to a Detroit woman was broken off last year, says G represents his most mature effort to date. (And it's hard not to read his romantic frustrations into songs such as "Application" and "It Hurts Too Much to Stay.")

"I've experienced more things in my life, and it's easier for me to put those things in words and sing about them," says Levert, who has three children. "I've gone through a lot of changes with people. That has made me express myself better in songs."

He's also expanding the range of his voice, singing in a near falsetto on some tracks.

"My father had been on me about letting people hear that there's more to Gerald than what they had been hearing," he says. "It's kind of like a Curtis Mayfield vibe. But I don't think I'll be able to pull it off live."

Levert, who was often compared to his father on his early albums and even filled in for him two years ago, when he was sick and couldn't perform with the O'Jays, says that Cleveland doesn't have the same network of R&B clubs it did when he started out. He recalls the days when venues like Vel's and Chic Nite Club, neither of which is still in business, catered to R&B artists. He also admits that the scene in general has changed and doesn't put the same emphasis on live performances.

"Adult radio won't play new songs by old groups," he says. "The O'Jays will come out with a new record, and they won't play it. You can't feel totally sorry for those groups, because they have great stage shows, and they can always perform live and sell the show out. You will go see Patti Labelle because you know you're going to get a quality show. With these new cats, you don't know what you're going to get. I think there's some very talented artists who have the possibility of being superstars -- people like Ginuwine and Sisqo. But I think they need to elevate their lyrical content and stop sounding alike. Lauryn Hill took it to another level on the female side, and there hasn't been a male to do that yet."

The booking of the Ghostface Killah/Cappadonna concert (both rappers are members of the Wu-Tang Clan) on March 15 at Trilogy (2325 Elm Street) is not an anomaly. Promoter Jason Sabo says that the club is planning to book more hip-hop shows in the future, especially since Peabody's DownUnder, one of the few other clubs in Cleveland that has consistently brought rap and hip-hop acts to town, has tapered off.

"We're trying to rewrite this city's music scene," says club promoter Jason Sabo. "We're targeting [hip-hop and electronica fans]. Now, since you can't do hip-hop in the Flats, there's a big open market for it. There's a coalition that runs the Flats, and they don't like the rowdiness of it -- at least that's what I've been told. But I've purchased a walk-through metal detector and two wands. We'll always have anywhere from 12 to 15 security people on the floor at all times. Once they walk in, they'll be thoroughly examined."