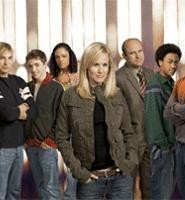 Veronica Mars: The Complete Second Season (Warner Bros.)
Any concept along the lines of "high school hottie solves crimes" is bound to make for watchable TV, but who would have expected this? Equal parts 90210 teen soap, murder mystery, and comedy, Veronica Mars pulls you in with its sharp writing, but even more so with acting that's well above television's standard teen-dream droolcups. Kristen Bell, as Veronica, has a sense of comedic timing usually denied to gorgeous blondes, and the supporting characters aren't far behind. This year's mystery -- who blew up a busful of students? -- borders on ridiculous and often takes a back seat to the banter, but who cares? Next season, Veronica's on her way to college; given the track record of shows that make that leap, season two may be as good as it gets. -- Jordan Harper

Kicking and Screaming: The Criterion Collection (Criterion)
Writer-director Noah Baumbach's sharp 1995 debut plays like an addendum to the laconic, sophisticated movies of whatever-happened-to Whit Stillman. A group of guys shuffle about as college grads who want to keep living the campus dream forever (i.e., Old School at the art house). It's about how these guys "define themselves now and hope that's how it always is," Baumbach says in a newly recorded conversation. If the bonuses are scant -- a nutty short film that feels like an axed pilot, a few deleted scenes, some old and new chitchats with cast and crew -- it's because the movie sort of is. Criterion really ought to get on Baumbach's The Squid and the Whale, but this is a pleasant time-killer -- like college, come to think of it. -- Robert Wilonsky

Double Indemnity: Special Edition (Universal)
Any film with a mugging qualifies as noir these days, but back in 1944, noir meant black shadows, moral grayness, and white-hot femme fatales. In other words: Billy Wilder's Double Indemnity, which crammed in enough talent to choke John Holmes' fluffer. Likable everyman Fred MacMurray is perfectly stunt-cast as the sleazy insurance salesman, and the story, in which fatale Barbara Stanwyck lures MacMurray into helping rub out her husband, has been copied (both implicitly and explicitly) over and over in thrillers for the last 60 years. Alas, a pair of film-buff commentary tracks won't appeal to most fans, and the second disc -- featuring only a 1973 TV remake -- is little more than a joke. A much better retelling can be found in the William Hurt/Kathleen Turner sleazefest Body Heat. -- Harper

The Robinsons (BBC)
The Robinsons is perhaps best described as Britain's Arrested Development, which is probably why 13 people in the U.S. know about this 2005 gem that aired for six episodes on the BBC. It's a dark, ironic, sorta-mean, kinda-sweet show about a family that loves to loathe each other and offers the sort of support you wouldn't wish from your worst enemies. And it's anchored by three stellar performances from Martin Freeman (The Office's Tim) as the put-upon brother trying to make something of his average existence; Hugh Bonneville (Iris, Asylum) as the prickly time-management specialist; and Abigail Cruttenden as the finicky sister who'll date losers because she's too lazy to break up with them. The Robinsons is more cynical than whimsical, but it's a genuine delight -- six perfect episodes, because seven might have been pushing it. -- Wilonsky