Temperature rising: Chris Stamey plugs in and kicks out the protest-era jams. 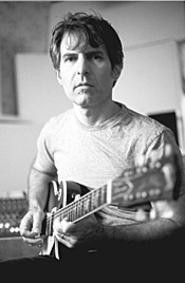 Chris Stamey doesn't consider his latest CD a solo album. A Question of Temperature is credited to the Chris Stamey Experience -- a moniker that evokes Jimi Hendrix's power trio as well as a journey outside the 50-year-old singer-songwriter's usual realm. Fittingly, the record features covers of hippie-era protest songs and originals in a similar vein.

Musically, it's unlike anything in Stamey's catalog. It's not like the power-pop classics he made with the dB's in the early 1980s or the smart indie-rock solo records he made throughout the rest of that decade. It's also a departure from 2004's Travels in the South, Stamey's first album in more than 12 years. "That record took too long," he sighs. "There are different types of recording. You can write something and just hit it at the right moment. Or you can have a game plan and get what happens.

"And I like both, but you get different things. It's the difference between Star Wars and Robert Altman. I like the Star Wars movies, and I also like Robert Altman movies."

Although Stamey claims Temperature isn't a reaction to Travels, one can't help but draw a line between Travels' delayed fruition and Temperature's let's-go-in-and-bang-this-thing-out turnaround. "There wasn't exactly a plan," says Stamey, pausing as he contemplates the reasons for the record's aggressiveness. "We went into the studio to record just a few things, but we ended up doing more than that. At the time, we were calling it the world's longest EP."

Travels was an ambitious road project that devoured several years. It called on several of the artists Stamey produced during his recording hiatus (Ryan Adams, Ben Folds, and Tift Merritt make appearances). A Question of Temperature comes with no such pretenses. Stamey and longtime pals Yo La Tengo simply went into his North Carolina studio, plugged in, and ran through mostly single-take versions of the Yardbirds' "Shapes of Things," Cream's "Politician," and some of Stamey's old songs, refigured just in time for another four years of Dubya. "What was going on in the country with Iraq and the election was really weighing on our minds," explains Stamey. "And a lot of the songs seemed to fit what was going on now.

"We just kept recording. I wrote a few songs in the morning, and then we'd record them that afternoon. We'd do a bunch of takes, only to find out the first one was the best." (Drummer Anton Fier and bassist John Chumbris fill in for Yo La Tengo on the road.)

Still, Stamey is hesitant to give Temperature too much credence. It's not meant to share shelf space with the other records he's recorded over the past 20-some years, he says. "There's a distinction between the novelistic thinking of making a record and the magazine kind of thinking. This is a lot more like a magazine.

"I think of this record as a collaboration," he concludes. "For me, it was instant karma."