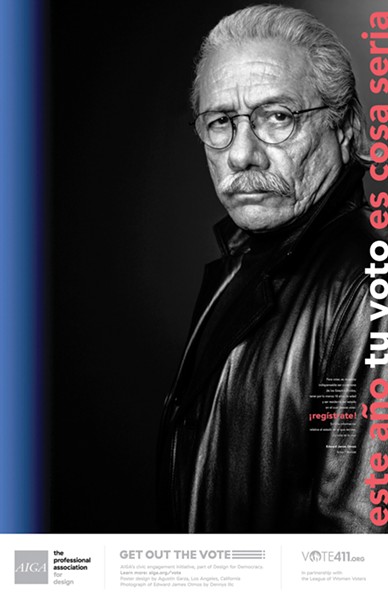 Get Out the Vote

This summer, the Galleries at Cleveland State University host a special exhibition of election-themed graphic art produced by more than 300 members, medalists and influencers of AIGA, the professional association for design. Hundreds of posters will fill the walls throughout the Galleries at CSU. Part of CSU's RNC Week, the Get Out the Vote exhibition opens with a preview reception from 5 to 8 p.m. on Thursday; additional RNC Week events begin Tuesday, July 19.

Get Out the Vote is curated by Jennifer Visocky O'Grady, who in addition to being an AIGA national board member is also a professor and former chair of CSU's art department.

"This is a unique exhibit, because the physical show is just a starting point, it's what we all do with these visual messages afterward that has a lasting impact, that completes the purpose of the initiative," says O'Grady.

Rather than propaganda loaded with rhetoric and trendy buzz words, the intention of this exhibition is a nonpartisan effort to "mobilize the communication design profession in support of voter engagement and efficacy while promoting the overall importance of political involvement for all citizens," according to their press release.

"Design makes ideas, people and places more visible," explains Julie Anixter, executive director of AIGA. "AIGA has pioneered the notion that design can be a powerful tool for an engaged democracy, and this campaign is one of many civic engagement projects under the organization's respected Design for Democracy initiative."

True to its democratic mission, all member posters are available to print and share on social media to support and promote voter engagement initiatives. To see all posters available for download, visit aiga.org/vote. To access important election information such as polling places, voter guides, and more, visit vote411.org.

The exhibition includes work by renowned designer Milton Glaser, co-founder of New York magazine and creator of the famed "I NY" logo. An outspoken advocate of the importance of utilizing design as a tool to effect social change, Glaser says, "Full participation in the electoral process protects our ideals." Get Out the Vote includes Glaser's latest work, "To Vote is to Exist."

In addition to Glaser's work, the exhibition showcases AIGA members from across the country, including noted designers Sean Adams, Antionette Carroll, Drew Davies, Agustín Garza and Jenny Lam. Garza transformed his poster, "Este Año tu Voto es Cosa Seria" ("This Year, Your Vote Matters") into a public service announcement featuring actor Edward James Olmos. Hoping to reach as many as 43 million voters (89 percent of the Hispanic population in the U.S.), the PSAs are running on the national cable channel Azteca from June 3 through November's election. "The political discourse this year gives the Latino vote unprecedented importance," says Olmos.

The CSU exhibition is part of a broad series of events and activities being hosted by the university during RNC week. Additional events include an RNC Cybersecurity Forum from 12:30 to 6:30 p.m. on Tuesday, July 19; TEDxSalon from 10:30 a.m. to 1 p.m. on Wednesday, July 20; and Conservative Thought and Environmental Sustainability from noon to 4 p.m. on Wednesday, July 20. For a complete list, visit csuohio.edu/rncweek/index.html.

Following its run at CSU, organizers plan to travel the exhibition to other venues. In conjunction with the Cleveland exhibition, a sequel will be presented in Philadelphia for the Democratic National Convention (July 25 to 28). Additional events are planned later this fall in cities such as Phoenix and Las Vegas.

The Get Out the Vote campaign began during the 2000 presidential election, and has since been presented every four years. Part of the larger Design for Democracy program dating back to 1998, the program seeks to enhance the whole voting experience, from voter registration through the polling experience. The program's success resulted in the U.S. Elections Assistance Commission endorsing AIGA's recommendations for redesigning election ballots to help improve voter experience.

This year, for the first time, AIGA is partnering with the League of Women Voters to increase distribution of posters, organize events with local AIGA chapters and student groups and drive traffic to Vote411.org for unbiased voter information.

Get Out the Vote remains on view at CSU through July 30. Regular summer hours are Friday and Saturday from noon to 5 p.m. During the RNC (July 17 to 22), the gallery will be open daily from noon to 8 p.m.

To participate in the dialogue through social media, organizers encourage you to use #GetOutTheVote.

Get Out the Vote