Get Smart redux is a rare TV remake that works 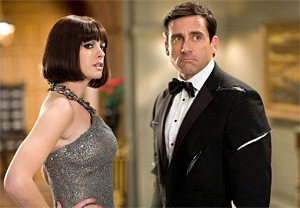 As old Broadway shows are revived, new Broadway shows get spun from old movies so that new movies may be fashioned from ancient TV series. It's an iron law of the culture industry that turns out to be a pleasant surprise in the case of Get Smart, the late-'60s sitcom retooled as a vehicle for Steve Carell.

The original Get Smart was distinguished less by its absurdist attitude (the show was conceived by Mel Brooks and Buck Henry) than by its catch phrases and casting. Stand-up comedian Don Adams drew on his nightclub William Powell impersonation to play Maxwell Smart, the dense, inept, officious Agent 86, teamed with über-'60s girl Barbara Feldon as the fabulously sexy, competent, and inexplicably adoring Agent 99.

Get Smart ran for five seasons, inspired a 1980 Hollywood flop (The Nude Bomb), and, nine years later, a more successful made-for-TV movie. This Smart redux is less a parody of a genre and more an all-purpose (and often quite funny) goofball action comedy, in which ridiculous banter alternates with slapstick car chases and midair stunts. No gag is held too long, and many one-liners are tossed off with impressive savoir faire.

Although slapstick, the movie has been made for the tele-literate — recycling many of the TV show's catch phrases along with shards of its musical theme. Agent 86, however, gets softened. No less deadpan or baroquely bumbling than the original, Carell's Smart is actually smarter. He's also more lovably neurotic — a know-it-all intelligence analyst, obsessed with his weight, who dreams of becoming a real spy, like the heroic hunk Agent 23 (Dwayne Johnson). Thanks to a national catastrophe, he gets his promotion and becomes obnoxiously competitive once partnered with the dishy but acerbic 99, played by Anne Hathaway. In the movie's best stretch of physical comedy, Hathaway disguises herself as Barbara Feldon to attend a Russian oligarch's ball and winds up engaging Carell in a bout of cutthroat mambo one-upmanship. (Hathaway, whose lush looks tend to overshadow her abilities, is not only a talented actress but a graceful cutup.)

First telecast less than two years after the Kennedy assassination and lingering on past the invasion of Cambodia, the original Get Smart was a priori anti-patriotic in making a mockery, week after week, of the CIA. (Mission Impossible, which made its debut in 1966, was the supportive antidote to such derision.) Although acknowledging the post-9/11 world, the movie Get Smart has no political subtext beyond a mild but persistent hostility toward the Bush administration. (On the eve of destruction, the president, played by James Caan, reads Goodnight Moon to a class of restless first-graders.)

Given that the whole notion of military intelligence has been pretty much discredited — or rendered postmodern in its lack of a fixed meaning — there's not much here to upset anyone. Still, it did seem that the number of triumphant fist bumps exchanged by the characters might strike the hysterics at Fox News as unduly terroristic. If so, the movie's sure sorry about that.