The Jigsaw Killer returns in Saw's even sharper sequel. 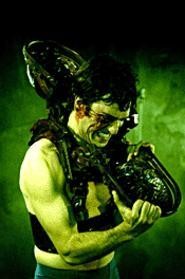 Talk about striking while the iron is hot: It's been only a year since Saw became an instant cult hit, as well as a topic of debate among horror fans. Was it an innovative new classic, or did the occasionally lackluster acting and ludicrous final twist doom it to also-ran status? Back then, my review asked that "if this thing becomes a franchise, let's demand more logic for the sequel." Someone paid attention: Saw II, despite the swift turnaround time, improves on all the first film's problem areas while leaving intact everything that was good about the concept.

Cary Elwes and Leigh Whannell are no longer in the cast (though we do learn of their characters' fates), but Whannell is still co-screenwriter, which is all for the better. With the identity of the mysterious Jigsaw Killer finally revealed at the end of part one, there are no silly guessing games as to who he might be this time -- his name is John Cramer (Tobin Bell), and he has terminal cancer. Racked with pain and sensing his own death approaching, he has decided that many people don't truly appreciate their lives, and that since civil society has taken away some of the Darwinian processes that would weed out the weak, he will do it himself by placing select victims in elaborate potential deathtraps, wherein survival usually hinges upon an act of mutilation (to oneself or someone else).

After an initial trap is sprung -- on a police informant, who must cut his own eye out to save his life -- we get some melodramatics from Donnie Wahlberg, as Detective Eric Mathews, a hardass cop who has a bad relationship with his son, Daniel (Erik Knudsen), in part because he had an affair with fellow cop Kerry (Dina Meyer, expanding on her role in the first film). The average viewer may worry at this point that the acting's going to be as shaky here as it was in the first go-'round, but thankfully, these scenes pass quickly, as Mathews and Kerry rather efficiently manage to capture Jigsaw in his lair. Closer to death than before, the killer doesn't even try to run; but as anyone who knows their Se7en or Oldboy might suspect, getting caught is all part of the plan.

Meanwhile, eight strangers are picked to live in a new house and have their lives changed . . . It's like MTV's The Real World, only way better, because all eight are being slowly poisoned by deadly nerve gas and must find the antidotes hidden all over the house (as befits a movie antidote, it's a glowing green liquid). Within this larger game of death, Jigsaw has also left several mini-games for individual participants, primarily designed to sow the seeds of dissent and distrust. And one of the eight is young Daniel Mathews. Another is Amanda (Shawnee Smith), who survived Jigsaw's reverse bear trap in part one.

The filmmakers are so concerned that suspense and secrecy be preserved that critics were not even given press notes at the screening until after the movie ended, lest the credits somehow betray too much of the story. So no more plot details here. Suffice it to say that there's nothing here as credibility-stretching as Saw's final revelation, though you will have to accept the by-now-standard conceit of a villain so omniscient that he can predict every single move his victim makes. Bell, best known for playing the Unabomber in a TV movie, really holds the screen in his scenes with Wahlberg. Without relying so much on the papier-mâché tricycle mannequin and the pig mask this time, he comes into his own as one of the most memorable horror villains in the last decade or so (look for the action figure early next year). Unless future sequels get really occult, though, it's hard to imagine him lasting as long as Freddy or Jason, if his terminal illness -- his defining character trait, after all -- is to remain credible.

New director Darren Lynn Bousman retains the same visual style that James Wan established, and industrial musician Charlie Clouser once again provides the score, though it's more subtle this time. The deathtraps are as nasty and brutish as you'd expect, though some seem to be uncharacteristically unbeatable. To the extent that the script is tighter, it may be because Bousman's preexisting original screenplay, The Desperate, was adapted by Whannell to become the Saw sequel.

As the tagline says, "Oh yes, there will be blood." And if you love gruesome horror, you will not be disappointed.