Getting Away With McKay

Promising pianist Nellie McKay battles her insecurities -- and her label. 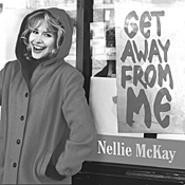 On the phone, the first thing that stands out about Nellie McKay is her sonorous speaking voice, which is a mixture of the sweetheart lilt of Judy Garland's Oz-bound Dorothy and the regal mannerisms of Tori Amos. The next thing you notice about the singer-songwriter-pianist is her genteel demeanor. She apologizes for a delay, is as enthusiastic about her interviewer's writing career as her own music, and uses words like "anathema" as freely as a college coed might drop "whatever" into colloquial chats.

What's perhaps most striking about the London-born New York City resident, though, is that she is only 20 years old -- and already she has more musical savvy, industry smarts, and sheer talent than most twice her age. This isn't surprising, considering that McKay often conjures the golden oldies on her marvelously anachronistic major-label debut, Get Away From Me.

Despite the enthusiastic endorsement for PETA prominently displayed on its back cover, the album's 18 tunes sound as if they were plucked from a dusty time capsule filled with scratchy 78s, Cole Porter tunes, and leisure suits. Expect 1940s-era jazz ballads, Broadway vamping, jaunty show tunes, even disco.

Get Away's lyrics, however, are filled with modern flourishes -- like "Sari," McKay's infamous rap song, in which she finds empowerment in her faults ("I'm sorry for my views/I don't know how to schmooze/And yet you know that really/I'm sorry for you"). The album is also colored by McKay's wicked sense of humor. "David" refers to the President as "Mister Bushie"; on "Clonie," she slyly says that she "should've signed with Verve instead of Sony." The bouncy jazz cabaret standout "Won't U Be Nice" turns the classic courtship song on its tail with lines like, "If you would sit/Oh so close to me/That would be nice/. . . If you don't/I'll slit your throat."

"I've always had . . . at once a very low self-esteem and a very healthy self-esteem when it comes to what I want," McKay explains, calling from somewhere in Pennsylvania while hanging out with her cat, Emerald. "If I really believe what I want is correct -- although I hate fighting -- I feel like you gotta fight to the death for it. This album was my baby, and I felt like a mother defending her cubs."

This stubbornness has caused occasional friction with her label, Columbia. Her insistence that Get Away be released as a two-CD set is just one of their more publicized clashes. She's currently dismayed over their support of an electronic press kit, which was filmed during a particularly bad fashion stretch in which she "had bright orange hair, bright orange eyebrows. I didn't know what I was doing with my makeup. Everything wrong came together at once." The kit also features an "atrocious" performance from her.

"That doesn't represent me at all," she says. "I hate it. So, we've been trying to get in this French footage we shot. I just feel that they [the label] are severely prejudiced . . . towards conformity. You always come up against that. These are people that have worked with the greats, and they still don't seem to understand what made them great was that they were different. You're reminded that you're not being enabled to create for yourself, you are being enabled to create for them. As people I really like them, but as collaborators -- it's hell!"

She laughs after this emphatic statement, but her consternation brings up one of the most refreshing things about McKay. While other pop stars her age resign themselves to malleability, she is fiercely protective of her quirks and originality. She demands control over how to present her art and image to the world, and refuses to compromise who she is or what she wants to stand for to fit into any glossy, narrow niche. It's an ambitious attitude, caused by a passion for and belief in her craft -- and has nothing to do with spoiled diva behavior.

"If you talk to any person off the street and you start talking to them about art, and then you say, 'What would you do if you were so-and-so's manager?' everybody has an opinion," McKay says. "Everybody would do it differently.

"I guess that's what some of the songs on the album are about. For so long I just beat myself up, because other people do things differently and I never fit into that. At a certain point, you can say, 'It's always me,' or you can say, 'Well, yeah, but you know . . . I don't know, Chaplin was a weirdo.' Weird isn't bad."

McKay grew up with her actress mother, living first in Harlem, then Olympia, Washington, and finally Pennsylvania, where she participated in a not-so-fun competitive marching band in high school ("It really was my first full-on backstabbing war, and that went on for four years"). She entered the Manhattan School of Music at age 16, a time she calls "torture," and dropped out two years later and started playing piano bars. After a spot opening for the artsy Trachtenburg Family Slideshow Players in 2003 earned her a glowing Time Out New York article, record labels came calling -- and now McKay is touring amphitheaters to critical acclaim.

"The main thing I want is for [my music] to affect [people] the way my favorite music affects me," she says. "That you feel either you are the singer, or they are singing about you. I want them to listen to it and have it to be able to help them in their life somehow.

"Music is what got me through college, and it's what continues to get me though everything. I need it, it's like a drug, and it's that way with most people. If I could be that person to some people, that just means everything to me."