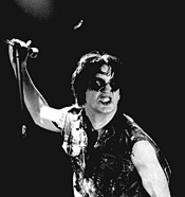 The last time Nine Inch Nails played Cleveland, in the spring of 2000, the show was a combination of nature films and nihilism.

Backed by three brightly colored screens depicting roiling seas and angry skies, NIN knifed into their repertoire, exposing all the blood and guts buried beneath the studio sheen. From the opening strains of "Terrible Lie," which was transformed from a breathy kiss-off to a lightning bolt of pent-up energy, the show was all about taking a sledgehammer to songs that had been crafted with a surgeon's precision.

In the studio, NIN main man Trent Reznor sweats the details, spending four to five years assembling albums layered with nuance. But once onstage, Reznor is about as cautious as a drunk juggling glassware. He smashes gear, screams through songs, and hurls himself at his bandmates, occasionally knocking them off the stage. This contrast between obsessive-compulsive meticulousness and pure blunt force has always defined NIN.

Formed in Cleveland in the late '80s, NIN made their name at local haunts like the Phantasy Theater, where they honed their confrontational live show. The band soon rocketed to national prominence, but Cleveland has always brought out the best in NIN. As they prepare to return this Sunday, we recall some of the band's more notorious Cleveland shows as told by the people who were there. As you'll see, NIN's upcoming stop at Quicken Loans Arena has a lot to live up to.

December 28, 1989, the Phantasy Nite Club
"That particular night was a favorite for me because it was a transitional gig. We had done some big shows -- CMJ, the China Club [New York City], the 9:30 Club opening for Meat Beat Manifesto [Washington, D.C.], and some great major-city East Coast gigs -- and when we came back to Cleveland, we were like, 'Wow. What are we going to do now?'

"I believe this show was the first time massive amounts of destruction took place. During the show, I think something went wrong with Trent's guitar amp, and he just fucking went crazy. He knocked a few things over onstage -- the Emax sampler was 'accidentally' kicked off of its stand -- and he pushed [guitarist] Richard Patrick into the audience. I loved the total spontaneity of it, and I was a little concerned by the financial aspect of it as well (I was afraid that maybe we couldn't afford to do the next show). It was my favorite gig, because NIN went from being a cool local band to something amazing well outside the city limits. I was so happy to be involved with them at that time.

"Of course, the highlight of the whole thing was the after-show party. Trent and Chris [Vrenna, drummer] lived in Ohio City near St. Ignatius, and they made fliers that were handed out at the show. Whoever wanted to come could come; it wasn't like it was some big exclusive thing. The party had a title: 'Show Up and Throw Up.' It wasn't long after that we took off on the Jesus and Mary Chain tour." -- Mark O' Shea, NIN tour manager, 1989-'95

April 3, 1990, the Phantasy Theater
"We got in the building just as NIN was beginning, and it was the closest thing I have ever felt to an actual ambush. Everything was coming off the stage, continuously: fog, blinding lights, decibels, water bottles, gear, and a whole lot of fucking attitude. I remember that sequencer line that runs through 'Head Like a Hole' keeping the pulse like a well-calibrated hate machine, as gear, bandmates, and audience members got abused. Those were the days when the band and their crew routinely covered everything with cornstarch. I know it was cornstarch because I saw one heckling death-rocker in a bootleg Bauhaus T-shirt get clocked straight in the face with a box of the stuff. After abusing the crowd for a little more than half an hour, the band threw some middle fingers and stalked offstage.

"I lasted for approximately 12 anticlimactic minutes of headliner Peter Murphy's set, before AP publisher Mike Shea snuck my buddy Ron and I upstairs to the after-show party and introduced us to Trent. I told him, 'I don't think I've ever seen anything that fucking amazing -- from Cleveland.' He laughed really loud, walked us over to the bar, mixed a drink for Ron, and began chatting me up about Test Dept.'s recent stuff. Fifteen years later, T. Rez is still several thousand parsecs ahead of anybody playing the Phantasy on a Thursday night, and I still own multiple copies of his records." -- Jason Pettigrew, Editor in Chief, Alternative Press

August 4, 1990, the Empire Club
"I was in the pit, on and off the stage -- I used to do that stuff when I was younger -- and my shirt got torn off. Trent comes out and first takes a big plastic bottle full of water and starts dumping it on everybody and then throws it out. So I'm getting wet, everybody's getting wet. Then he comes with this big box of powder, like baby powder, and he throws it out on everybody. People are wet, and then they get stuck with this white powder on them. So I'm like, all right, whatever. Then I'm driving home, and my head's itching a little bit. I started itching, and then I started itching more all over. The fucker threw itching powder!" -- Derek Hess, Cleveland artist

August 5, 1991, Blossom
"It was an outburst of energy like I've never seen at Blossom. By the time Nine Inch Nails were on Lollapalooza, Hate Machine was out, so they were popular. Jane's Addiction was also on the bill, they were the headliners, and they were pretty hot then too, but Nine Inch Nails were clearly the breakthrough act of that day. There was a surge in the crowd while they were playing, and the fences collapsed -- I don't remember what security did. The crowd didn't get onstage, but for the only time I can remember at Blossom, the pavilion turned into a mosh pit. Blossom is not known for its free spirit, but it couldn't prevent this. It was the kind of moment in rock where a group connects with its audience, and you saw the bond being formed. That's when you knew they were huge." -- Carlo Wolff, Scene contributor

December 28, 1994, the Odeon
"Well within a year of The Downward Spiral's release, NIN was unavoidable on the radio. Almost every angry youth had the record and spilled out the cash for the massive 'Self-Destruct Tour.' It was quite a spectacle. But apparently for Trent Reznor, selling out arenas was not the same thing as the cramped confines of a club gig. After a few days of rumors circling around town, solid word came through that NIN would be doing a special gig at the Odeon.

"Dragging along an initially skeptical acquaintance with me, we jumped in line before the local stations announced the gig. Apparently, at least 150 other people got the advance word as well by the time I got there (two hours before any official announcement over the airwaves).

"The club only let in the first 500 people at the door -- for a mere $5 -- and the night started with a showing of Japanese sci-fi trauma flick Tetsuo II: Bodyhammer. The first thing I noted as the screen went up was 'Hey there's no barricade between the stage and floor . . .' In other words, absolute bedlam was about to begin. Imagine combat scenes from Aliens reenacted in the mosh pit, and you'll get an idea of how over-the-top the show was. It was also the hot ticket of the night, with at least one report of rabid fans trying to break into the Odeon through adjacent buildings. The stage was raining people and demolished gear (I still vividly recall the poor sap who took a spill into Chris Vrenna's drum kit). Reznor and crew took control of the chaos and turned out a blistering, two-hour set, including the most incendiary version of 'Happiness in Slavery' I've ever heard live, followed by Reznor's full-steam swan dive into the crowd. And in a rare moment, Reznor addressed the crowd, confirming his discomfort with playing arenas: 'I'm glad to be back in a club,' he said. 'Trust me, we hate playing arenas as much as you hate seeing us in them.'" -- Norman Narvaja, writer for the Mansfield News Journal and Scene contributor