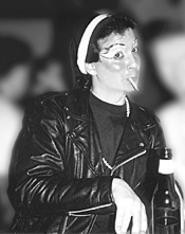 Halloween's a real drag for Tom Joseph. At Friday's Helloween costume contest at the gay club Grid/Orbit, he'll compete as Sister Discipline, a tough-talking, chain-smoking nun. "Handcuffs hang from my belt, for those students who get out of hand," Joseph says, "because I'm not messin' around."

He's not kidding. Strutting in five-inch pumps, Joseph promises to scan the club for misbehaving kids. "Sister Discipline will work you over like an alcoholic nun who's run out of altar wine, and all the stores are closed," he warns. The competition could get fierce -- $1,000 in cash is up for grabs. Helloween starts at 5 p.m. at Grid/Orbit, 1437 St. Clair Avenue. Admission is $3; call 216-623-0113. -- Cris Glaser

Saturday's Halloween Cruise on the Nautica Queen is a three-hour ride past haunted locales along the Cuyahoga River and Lake Erie. Hors d'oeuvres will be served while the captain tells spooky mariner stories. Afterward, each passenger receives a free pass to Fright, the haunted-house attraction at the Nautica Complex. "We don't have characters or anybody jumping out at you on the cruise," says Lori Miles, the ship's assistant general manager. "We don't want anyone falling overboard." It starts at 6:30 p.m. on the Nautica Queen, 1153 Main Avenue on the West Bank of the Flats. Tickets are $29.95; call 216-696-8888. -- Cris Glaser

Fantastic Voyage
CIA journeys to the center of artists' minds.

Wish You Were Here -- The Art of Adventure gathers nine international artists to explore their sense of adventure. The show, opening Thursday at the Cleveland Institute of Art's Reinberger Galleries, includes an interactive comic-book painting, a live video feed from Lake Erie, and a life-sized sculpture of a break-dancing astronaut. Contributing artists include Bas Jan Ader from the Netherlands, Brit Alex Baker, Belgian Christopher Fink, and Americans Becket Bowes and Amy Cutler. Wish You Were Here is at Reinberger Galleries (11141 East Boulevard) through December 30. It's open 9 a.m. to 5 p.m. Monday through Thursday and Saturday, 9 a.m. to 8 p.m. Friday, and 1 to 5 p.m. Sunday. Admission is free; call 216-421-7407. -- Michael Gallucci