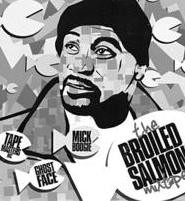 The Broiled Salmon Mixtape isn't a damn-I-shoulda-bought-this-instead revelation, like Mick Boogie's other current mixtape promoting Mobb Deep's wretched Blood Money. But that's no reason not to pick up this fine addendum to Fishscale, Ghostface's recent return to whacked-out form.

Hosted by Tony Starks himself, the Broiled Salmon Mixtape has something for the Wu Tang faithful --more than half a dozen collaborations with Raekwon the Chef, including a brief Mick Boogie mix of the reflective "The World" and "Back in the Air," and the pairing from ODB's still-unreleased A Son Unique -- and material for lovers of Ghost's more abstract work. "Angeles," a lush, string-and-horn-fueled appetizer for Ghost's forthcoming teaming with Doom, is the biggest fish served up to the latter group. But fans in both camps will probably feast on the interlude, when Ghost promotes his new action figure -- "It's gonna cost you like $500," he warns, "because of the gold and shit." Eat up.