Jazz guitarist Charlie Hunter ditches his band to develop an identity of his own. 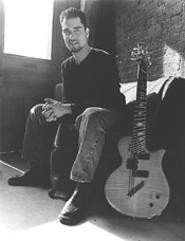 It's mid-morning, and guitarist Charlie Hunter sounds surprised as he picks up the phone and cuts off his answering machine, which beat him to the punch.

"I didn't even hear the phone ring; I'm going to have to fire my phone," Hunter says with a laugh, speaking from his apartment in Brooklyn, New York.

While Hunter's joke is innocent enough, it's also indicative of the way he thinks. He's not against making whimsical decisions. In fact, he embraces change as do few of his contemporaries. Over the course of the eight years that Hunter -- who originally played guitar in the seminal Bay area hip-hop group the Disposable Heroes of Hiphopcrisy -- has been on his own, he has employed a number of different musicians in different contexts. And while the music he plays gets categorized as jazz, it's hardly an easy fit, as it has elements of rock and R&B tossed in.

After the Disposable Heroes broke up in the early '90s, Hunter started his own bands, and he has employed a number of musicians in different contexts to back him up. For his debut, 1993's Charlie Hunter Trio, he worked with tenor saxophonist Dave Ellis and drummer Jay Lane. He then added alto sax for his 1996 album Ready . . . Set . . . Shango! and the following year's Natty Dread, a song-by-song cover of the Bob Marley album. For 1998's Return of the Candyman, he got rid of the horns and teamed up with vibe player Stefon Harris, percussionist John Santos, and drummer Scott Amendola, dubbing the new group Pound for Pound. He's also kicked around with T.J. Kirk, a band that features two other experimental-minded jazz guitarists (Will Bernard and John Schott) and plays the music of Thelonious Monk, James Brown, and Rahsaan Roland Kirk. It released one album in the mid-'90s, but hasn't been active since.

In addition, Hunter plays guitar on three tracks (two of which he co-wrote) on D'Angelo's new album, Voodoo. Now, with his latest effort, a self-titled record, he's backed up by drummer Leon Parker and an assortment of studio guests. On tracks such as "Al Green" and "Dersu (A Slight Return)," Hunter and Parker are unaccompanied. On other songs, such as "Nothin' But Trouble" and "Cloud Splitter," he's got tenor saxophones and trombones wailing behind him. The variety of music on the record displays Hunter's flexibility and contains echoes of all of his previous releases. Hunter maintains that he doesn't randomly shuffle lineups, but purposefully alters them in the quest to improve upon his previous endeavors.

"With my other records, each one was like a concept of a group, and the goal was to get that group to have a really clear identity," he explains. "With this record, it was just me and Leon [Parker], and we built the group around us and took each tune as its own separate piece. You always want to try to make each record be an advancement of the one before it, in some way, shape, or form. It doesn't mean that every record you make is going to be better liked than the one before. It just means that when everything is done, there has to be some kind of evolution. I like how the record turned out. I don't know what the next record will be like. I just wait to see what comes and hope that I have enough ammunition."

Hunter, who grew up in the San Francisco Bay area, where he lived until moving to New York three years ago, started playing guitar when he was 12 and experimented with a variety of styles with different bands before gravitating toward jazz. He never received formal training in jazz, but studied basic music theory when he was in community college. Hunter says he learned to play jazz by "listening to records and playing with people who went to music school." His education was a form of evolution that involved learning to emphasize technique over volume.

"As a kid, you're not like 'Let me check out some Wes Montgomery and Joe Pass,'" he explains. "You're like 'How can I turn my amp as loud as possible and annoy everybody?' After a few years of playing, I learned all the blues licks and all the rockabilly licks and all the funk licks. I learned all the licks. Then I thought, 'I could make more of this.' I heard Charlie Christian, Charlie Parker, and Wes Montgomery, and I knew that was what I needed to study."

Crucial to his development as an innovative player was his discovery of the eight-string guitar, which has a patented fret design that enables him to play both bass and guitar simultaneously. Hunter, who now teaches several students to play the unique instrument ("I hope they eclipse me, so I have to get my act together and move forward"), says he pursued playing the more unusual instrument because he didn't want to become a faceless hero of six-stringed theatrics.

"It's so difficult, I can't even explain it," he says, when asked how he's able to play what is essentially two instruments at once. "Imagine pushing a van up the hill with the brake on, and there's a time constraint, and you have to push it with a certain rhythm. While juggling. I'm not interested in just being another guitar player. There's millions of them, so what's the point? What service would I be providing? I'm glad they're doing it, but it's not the road for me, and I'm glad to be doing something different."

For Hunter, being "something different" means that he doesn't play the venues that normally host jazz music. On previous trips to Cleveland, he has played in such places as the Rhythm Room and the now-defunct Wilbert's. On this visit, he eschewed the jazz club Nighttown in favor of playing the Grog Shop, a venue known more for hosting indie and alternative rock.

"That distinction [between jazz and rock] is very arbitrary anyway," he says. "What is a jazz audience? Is there such a thing? What makes up an audience? I just play to music people. I prefer that, because people can let their hair down and really get into the music and try to have a connection. It's not about going to the dentist's office."

Hunter's concerts have recently started to attract jam band fans. Like Medeski, Martin & Wood or Galactic, Hunter lays down a good enough groove that Phishheads can twirl to his music. It's something that he isn't embarrassed to admit, in part because he sees his music as a superior form of improvisation.

"I think we're getting [a jam band following]," says Hunter, who is touring with two percussionists -- a drummer and conga player. "I'm glad. They're great. My audience is really smart. They're really into music, and I think they dig us because -- no dis on the jam bands -- from having studied improvisation for so long, we have more of a vocabulary to draw from, so it makes for a more fulfilling performance. You have to know how to use that vocabulary, so you're not just speaking circles around people. It has to be served up on the right platter. We grew up with all the idioms, so we can approach what we do with some degree of integrity and competence."