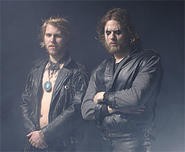 Ultimate Donny, the frontman half of Gil Mantera's Party Dream, won't promise the band will perform "Brave New Christmas." But he says it's possible, and adds the new-wave revivalists -- they were doing it before all those other cats -- will play at least two new electro-rock workouts. Also working out new material will be Grand Buffet, the slept-on alt-rap duo who never perform the same set twice. Co-frontman Lord Grunge says -- with a 50-50 split of irony and sincerity -- the new GB disc will be "a combination of ICP's The Wraith and Rush's 2112." Go to clevescene.com/blogs for exclusive updates and interviews with both bands.