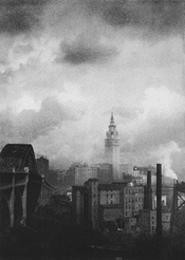 To gossip columnists in the late '20s, she was "the girl photographer." But early in her career, Margaret Bourke-White was also being hailed as "the daredevil of Cleveland's steel mills" -- a risk-taker who sought and found beauty in the city's smokestacks, drawbridges, and battered boats.

A thought-provoking new exhibit at the College of Wooster suggests that, although Bourke-White's early photos of Cleveland celebrate the city's industrial might, they also confirm her skill at advancing her own artistic goals while she worked to glorify big industry. Her pioneering photography can be seen in Steel & Real Estate: Margaret Bourke-White and Corporate Culture in Cleveland, 1927-1929. This is a compelling way of viewing the work that Bourke-White produced in the late '20s. Just as the mills she photographed started with unprepossessing materials like coke and ore, but then transformed them into steel, Bourke-White started with assignments from prominent industrialists to publicize their operations and proceeded to make art.

Curator Geraldine Wojno Kiefer describes the photographer as a "young go-getter with an innate sense of timing and a carefully manicured sense of image." The exhibit catches up to Bourke-White at an exuberant moment when, barely into early adulthood, she knew what she wanted to say and had the skill to say it well. In fact, as Kiefer has conceived it, the show is not a biographical extravaganza that uses the work to explain what's going on in the artist's head. Nor is it a series of photographs that have been placed here so that people can shed a nostalgic tear for early industrial Cleveland and the power brokers who were so instrumental during that time. Rather, it tells the story of a special kind of artist-for-hire.

Bourke-White would later be known for her photojournalism in Life magazine, but the current exhibit shows us that almost a decade prior to her first assignment for Life, she was a commercial photographer. In 1927 (the year she settled in Cleveland), she was 24 years old, a recent Cornell graduate, and an artist on a mission. That year, she solicited a series of commissions from the city's architectural and corporate communities. Many of the resulting photographs are here. About a quarter of them are of estate gardens. Kiefer argues that the garden shots are important not for aesthetic reasons, but rather as "examples of [the photographer's] successful . . . negotiation of the complex territory of public relations." These works suggest that Bourke-White had not yet found her expressive voice. They are of leafy garden paradises in the gauzy, soft-focus pictorialist style that characterized art photography in the first two decades of the century. The effect is sometimes a bit campy, as when, in a shot called "Garden, Sherwin Estate," Bourke-White makes an analogy between the curved tail of a stone carved squirrel and the rounded arch of a greenhouse door.

On the other hand, in a shot called "Cattle in Stream, Sherwin Estate," one already gets an inkling of the interest in abstraction that would soon inform her industrial Cleveland shots: You can make out the cattle, lapping up water in a stream, as well as some dense foliage in the midground, set off against a cloudy sky, but there is also a prevailing flatness that transforms the space into a series of patterns. For example, the sky is rectangular, and the sharp line that separates sky from grassy pasture is echoed in the similarly sharp horizontal that defines the water's edge. It's a transitional photograph, part John Constable (the 19th-century English landscape artist), part Edward Weston (the 20th-century American photographer, who could turn a bell pepper into a riot of elegant abstract shapes).

Bourke-White's shots of industrial Cleveland are not transitional. They chart the first flowering of the photographer's creative maturity. Kiefer describes them as "corporate-inflected" works, and by that she means that these industrial photographs were only partly about glorifying the work of upper-level management, for whom Bourke-White was working. She was also forging her own style. What were the characteristics of this style? Bourke-White's shots of Otis Steel are lean and hard-edged, but also atmospheric. The steel mills of that time were not merely places where workers punched their time cards and braved the heat of the furnaces. As Bourke-White photographed them, they were places where workers and management were both engaged in a heroic effort to bend the raw materials of nature to their will.

The Otis Steel photographs crystallize this struggle. We are not being instructed on how ore and coke are turned into steel -- there are textbooks for that. Bourke-White instead concentrates on the symbolic battle between raw materials and the efforts of industry to transform them. In a shot called "Train Cars and Smokestacks," the stacks in the background are set against a wintry sky while, down below, some cars are carrying coke. The shot contrasts the verticals of the smokestacks with the diagonal line formed by the train cars as they recede into space. An embankment at far left, a mixture of ice and gravel, slopes toward the center of the frame where the train cars are. The noise and confusion of industry are nowhere to be found here. Plant machinery is rendered as a network of quasigeometrical shapes (triangles and squares are implied, but are never seen in full). But there is also a textural specificity, which adds atmosphere: There is the soft billowy smoke emitted by one of the train cars, the smoothness of the railcar steel, and the gravelly embankment. Although Bourke-White translates many of these industrial structures into abstractions, she also particularizes the objects she photographs by paying attention to their textural characteristics and by refusing to abstract them beyond recognition. She seems to be saying that each object (and, by extension, each individual) has a role to play in the transformation of raw material into steel.

The approximately 80 prints in the show are all Bourke-White's own and are mostly "vintage" -- contemporary with the date the negatives were first developed. This is one of the exhibit's most interesting features. In addition to finished portfolio-quality prints, the show includes contact prints and prints made for and handled by magazine reproduction departments. Some are torn, creased, or smudged, suggesting how the world of a commercial photographer in the '20s was one of deadlines and high-speed production. Some of the images were originally included in magazines like Trade Winds, the monthly Union Trust stockholder magazine, and Fortune, which published her photoessays. Copies of some of these publications are on view at the show, and they enhance the sense of period authenticity.

The vintage prints also emphasize the position that these works have as icons of modern art. Some of them disregard conventional standards of what a good print should be (sharp, without surface flaws). Many of Bourke-White's prints here are partially blurred and edged with dark shadows. This is no accident. When, in a photo called "Skyline," Bourke-White shows the Terminal Tower (then one of the tallest buildings in America) on a hazy overcast Cleveland morning, the blurriness suggests the grit of this town in its industrial heyday, but it also immerses the scene with an aura of lyrical beauty.

The same connection between manner and matter can be found in shots such as "Slag Piles, Otis Steel." The clean focus of this shot suggests that the haziness elsewhere was by design. Slag is the material that is left as residue after the smelting of metallic ore. One would think that there are few subjects on this earth less photogenic. Bourke-White convinces us that these heaps of slag are part of the process of making steel and thus are worthy of the photographer's scrutiny. To highlight that point, Bourke-White goes for sharpness in this shot. So detailed is it, you can make out the separate granules of slag. The photographer also imposes order on this view of industrial waste by setting up a series of diagonals that lead the viewer's eye from the foreground all the way to the distant background. In the immediate foreground, there is a diagonal steel structure that resembles a railroad track. This is echoed in diagonals formed by the piles of slag in the midground. Finally, there is a diagonal crane in the far background that is adjacent to some towering smokestacks.

It's a striking photograph. One senses, here, how the photographer's formal means have been tailored to a keen conceptual message. The sharp focus is telling us: "Look closely -- even slag heaps have something to say." This admonition to look closely is at the heart of this fine show. The exhibit provides a peek into an important moment in Cleveland history and casts an amused glance at the reporters who, in the '20s, condescendingly termed Bourke-White a "girl photographer."

Charles Yannopoulos can be reached at charles.yannopoulos@clevescene.com.