Feminism puts on its party dress for the Insides Out conference. 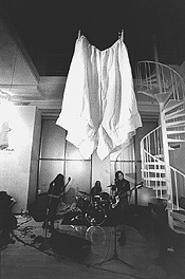 It was a meeting of the minds, or at least feminism and fun fur. At the wine-and-sequins reception for Insides Out: A Conference for the Girl in You at the Cleveland Center for Contemporary Art, a band called the Librarians, glitter splashed across their pulse points, played loud and raw music for the post-punk bookworm in you.

Barbie showed up, hung on a cross and strapped to the bosom of schoolteacher Annie Peters. Ms. Mattel was suffering from a severe case of bedhead and an even worse case of being spray-painted gold, from the tip of her tornado-tousled bouffant to her tippytoes.

"It's called "Barbie Crucifixion,'" Peters said of her personal Jesusette. "I made it for an icon show a few years ago."

Peters's 14-year-old daughter, Chelsea, gave it two very black-nail-polished thumbs up: "I love it," she said. "It's so cool."

Though not crucifying any of her old toys yet, Chelsea's into art, too. Right now, her preferred medium is photography using sticky film -- you pull off the backing and stick the picture on your locker or folder, an advancement that was a little bit before the time of her idol, Linda McCartney.

Also on opening night, for perhaps the first time in print, Librarians and Corduroy Astronauts guitarist Sharon Yoo talked openly about her secret affair with a karaoke machine that she performs with in one of her side projects, Sharaoke.

"I do pop songs and love songs, material regarded as mainstream," Yoo said. "Stuff that's too happy for my more serious band. My dad told me that karaoke means "fake orchestra' in Japanese, so I figured Sharaoke means Sharon's orchestra. I know the songs are cheesy, but they have some merit, and I want them to be heard."

Inspired by J.S. Bach -- "the original pop artist" -- Yoo does a number dealing with her desire to be a stick of her lust-object's bubblegum and covers Donovan's "Mellow Yellow."

"I've got my mixing board, so when things get slow, I'll put in a trumpet solo or a French horn solo."

The conference, which ran January 28-30, was a slumber party sans the sleeping bags. Diaphanous baby-doll dresses, in rainbow sherbet colors, hung from the ceiling in lieu of crêpe paper. While figuratively curling each other's hair over the weekend, participants were to eventually touch on some serious issues: eating disorders, the sexist messages reinforced by advertising, and body image and identity. It was hard to take the medicine when the cotton candy was so fabulously fluffy. But everybody tried to be serious, really they did.

Yoo, for instance, could smoothly segue from bubblegum to cross-cultural identity issues. Her first political move was at age seven, when she ripped an ad showing a topless girl in jeans from her dad's magazine and folded it into a tiny square. Growing up, she said, she felt relatively good for a "pint-sized and angry" young girl transplanted from Korea to blond, blue-eyed Amazon land.

"Inside, you feel fine, but you know you're different," she said. "You're judged by that standard of American beauty. Plus, you're getting mixed messages. In the '70s, women were burning bras, but you're also a part of immigrant families who live very conservative lives, and you're trying to figure out where you fit in.

On Saturday, a workshop on feminist art included slides of Michelangelo's David remade in red lipstick. Some women found red lipstick empowering, others menstrual. Still others were on hand to clarify the origins of the word "seminal," when it came up in polite conversation. "It's a male-oriented word," said a woman. "It comes from semen, and it means essential."

Not exactly burning their bras, but in some cases making their titties prettier were the women (and one body-conscientious guy) participating in the "If It Glitters, It's Good" workshop.

While others attended a lecture on eating disorders and body fads, in the glitter workshop, the mission was to pick your least favorite body part and make it beautiful on paper with glue sticks; Magic Marker; metallic pink, rose-patterned wrapping paper; and what appeared to be several wheelbarrows worth of sequins.

"It looks like a boudoir exploded in there," commented conference organizer John Chaich, who was chilling by the cappuccino machine. "Ginger, our education director, had a lot of fun shopping for this, and I think raised a few eyebrows at Jo-Ann Fabrics when she bought that lamé purple lace."

Joanne Gephardt, a financial adviser with granddaughters ranging in age from 5-19, chose her sinuses. "Here's jewels coming out of my nose and a bit of silver for my hair. At my age, I think body image might have more to do with health issues." Divorced once and widowed twice, she says the issue for her granddaughters is to stop thinking that men will take care of them. "You need to have your own money. I'm a financial adviser, and I own rental property."

And Megan Neil, a Case Western Reserve University engineering student, was performing a little breast enhancement with flowered pink wrapping paper for her nipples and that eyebrow-raising purple lace.

"I'm making my boobs, because I think they get in the way," she said. "I'm self-conscious wearing anything like a tight T-shirt. The bounceage is glorified by strappy tank tops, and lace bras accentuate your breasts."

The bounceage wasn't glorified for 17-year-old Kara Young, a junior at Laurel School and one of two high school students at a conference that was originally semi- targeted toward high school girls, with posters sent to area principals.

Young had nabbed the necessary glitter products to make "my butt. It's huge. I figured, if you have such a big piece of paper . . ." But she was more eager to talk than glue.

"I'm the only one here. All of my friends are at a birthday party or shopping. I even announced it to the whole school."

But she's still trying hard to like them. They're rich, so they have more issues.

"A lot of the girls who have wealth, they think, I have to be beautiful, I have to be perfect," she said. "For them, it's about who can have the best shoes. I look at that, and I think it's so pointless. But I have faith. They'll find feminism."

Ari Weitzman, president of a women's group at Case, decided to forgo the arts and crafts altogether in favor of the eating disorders workshop.

"I've been dieting since I was seven. My mother is a big feminist. Still, in our house, all we had was diet food." She wasn't allowed to have Barbies, but "my weight was talked a lot about at home. [My mother] made comments if I was eating a lot, which were unconscious to her, but it's ironic, because she's a psychologist who works with people with eating disorders."

Later, one of the fruits of the glitter workshoppers' labor, a silver-and-rose-adorned nether region with plastic cherries ripening on its lips, was hung from a window.

"Oh my god, there are cherries on that vagina," noticed LaTida Lester, a Planned Parenthood educator. She and colleague Sarah Fritsch were planning to gear their critique of how the media portray women to a crowd that "doesn't know if there's three holes down there," but quickly modified things for the hole-savvy.

"A conference of this nature attracts people who are already enlightened," said Lester, who's 26. "Think of the people who were here last night. There were very specific people. Even today, a lot of the same types showed up."

To attract more real girls, it would be better to have the conference at the mall than at an art gallery, Lester said.

In high school, Lester had more beauty than body concerns, most of them related to being an African American woman in a white woman's world. Her lips were too full, her eyebrows too bushy. She once had a tragic run-in with a bottle of Neet that would have surprised the penciled-in arches off Marlene Dietrich. "I removed them completely. My mom was so embarrassed to be seen with me!

"But then again, a lot of African American girls don't think of body images. Not so much with weight, anyway. People are more concerned with the depth of their skin color."

The Sunday night panel discussion was anything but paneling or any other type of wallcovering, with the four distinguished guests spouting words and wordlets of wisdom.

"If it was up to me, somebody who looked like David Bowie would be anchoring the news, and we'd never have to look at Sam Donaldson," said Debbie Stoller, co-founder of Bust girlzine, who referred to the '00 decade as "the Boobies," for their perky roundness.

"Feminism is the equality of men and women," she said. "It's the simplest goal and the most impossible to reach. Does absolute equality mean losing the things that make you a woman? No, but those are the things that can be used against you." You go, girl!

In true panel discussion fashion, the audience members were more interested in being heard than hearing the panelists. A dude got up and asked a highly important and incoherent question about the future of feminism, then chided the respondents for not answering his question.

A few rows up, in true girl fashion, a note was passed.

"mayB if his question was shorter it'd B Ezer 2 understand," it read.

And then, as fast as a piece of crumpled paper slam-dunked into a study hall wastebasket, time was up. Okay, so the weekend wasn't always soul-searching, but we're not living in the '60s anymore. We're living in the Boobies.