The Warped Tour begins to show its feminine side. 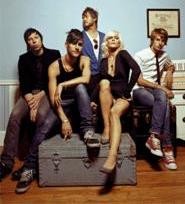 The Warped Tour, like its summer-festival counterparts Ozzfest and Sounds of the Underground, has long been predominantly the musical playground of male fans. In recent years, however, the music/extreme-sports extravaganza has attracted increasing numbers of female fans. Today at the festival grounds, spectators will notice almost equal numbers of male and female attendees, the latter often wearing band T-shirts, purchasing CDs, waiting in autograph lines, and comparing tattoos.

Currently in its 12th go-round, the festival, which veteran artists describe as "punk-rock summer camp," still brands itself as a showcase for cutting-edge punk (Anti-Flag, NOFX) and hardcore (18 Visions, From Autumn to Ashes). But lately, not only has it attracted more corporate sponsors; it has drawn a wider mix of music fans by diversifying its lineup.

This year, for example, Warped features performers from such genres as emo (Thursday, the Early November) and pop-punk (Motion City Soundtrack, the Academy Is . . .), and even acoustic sets by the likes of Senses Fail and Saves the Day -- whose kinder, gentler lyrics make them more accessible to teenage females.

"I think it's very close, right around 50-50," tour founder Kevin Lyman says of the male-female ratio of the tour's crowd. He first noticed more females in attendance when Warped began featuring ska bands like the Mighty Mighty Bosstones. "A lot of young females are coming to the tour now. They feel comfortable, there's a lot of stuff to see and do, and they get into the music."

Though women and men fans may be turning out in nearly equal numbers, the same cannot be said of the acts appearing on the half-dozen-plus Warped stages. In 2004, the all-female group Shiragirl was so frustrated by the dearth of women onstage that the bandmates crashed the festivities in a pink-and-black RV and played their electro-punk without official permission. Impressed, Lyman has invited Shiragirl back for the last two years and has even named a stage after the band, devoting it exclusively to all-female and female-fronted groups. But as with the more commercially oriented Girlz Garage tent, the Shiragirl stage is something of an anomaly; it's clearly an exception to the (masculine) rule. On the main stages, the presence of women remains limited to only a handful of artists.

"Women are generally not encouraged to pursue music and playing instruments, which is generally a hobby built on isolation, technical nerding-out, and a masculine sort of ideal of virtuosity," says feminist culture critic and former publicist Jessica Hopper. "There are less big bands with women appearing on this sort of circuit, and it may not occur to young women -- until they see one of their own empowered by the hierarchy of stage and microphone -- to do it for themselves."

Indeed, there's only so much a promoter such as Lyman can do.

"The organizers seem to make a genuine effort to include female musicians and crew as much as possible," says bassist Carla Cherry of Cleveland's punk/post-hardcore foursome the Lovekill. "However, as everyone knows, the pool of female musicians is much smaller than the number of male musicians out there. I don't know why this is, but I suppose it's a cultural thing. It goes back to the question, why do little boys play with trucks and little girls play with dolls? It's not because they are innately drawn to those things; it's because the culture surrounding them leads them in that direction. But cultural climates shift all the time. So if you're currently seeing an increase of female attendance at Warped Tour, in the future you may see more women becoming involved with the actual experience of learning an instrument and getting onstage."

Lyman also believes that it's only a matter of time before the number of mixed-gender and all-female bands increases. "Nowadays there isn't a group of guys sitting in a room, talking about starting a band and having all their girlfriends hanging around. Joining a band is more of a social thing now, like joining Little League, and girls aren't just standing back and watching; they're starting their own bands."

Perhaps the most visible role model for aspiring female musicians on this year's Warped roster is Joan Jett, a pioneer punk rocker, the founder of Blackheart Records, and a tour headliner.

"I am glad she is playing, and I hope it's inspiring to people who see it: She defies the odds. She's over 40, female, queer, visible, and respected -- iconic, even," says Hopper.

While Jett has a long history as a proud trailblazer, not all modern female artists feel the need to differentiate themselves by sex.

"Playing and touring in a band, I don't really think about being female or the fact that I'm not male," Cherry says. "The only time it registers is when people ask me questions such as 'Why do you think there aren't more female musicians in rock/punk (or whatever genre of music)?' Like I can really answer that question on behalf of all women! I'm just one single person who likes to play bass and sing."

Maja Ivarsson, vocalist for the Swedish indie new-wave group the Sounds, agrees. Although her tough, outspoken lyrics feature prominently on 2003's Living in America and March's Dying to Say This to You, Ivarsson hesitates to label herself a spokeswoman for her gender.

Whether female musicians like Ivarsson and Cherry will defy the odds and join Jett as musical icons remains to be seen. But according to Ivarsson, what stops young girls with guitars from taking to the stage isn't a missing body part; it's a missing mind-set.

"Just like everyday life, in ordinary jobs or in a position where [a woman] can be a boss in a company, there's a lot more females around [in music] nowadays than there were in the '50s, '60s, or '70s," she suggests. "Every girl who has a dream of becoming something should just go for it. And don't think, 'If it happens' -- think, 'When it happens,' because if you have that attitude, it will."