Pieces of April's story of a family falling apart to come together is no turkey. 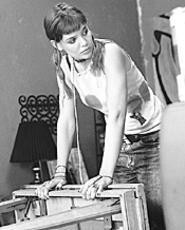 Pieces of April, made by playwright-turned-novelist-turned-screenwriter-turned-director Peter Hedges, could be confused for a compendium reel of someone's home movies. Shot on digital video using existing light, it looks like something assembled by a film student for a final project and lost soon after, left behind for a stranger to find and watch and decipher. It just begins and then barely ends, and what's in between is less a story than a collection of dropped clues about who these people are, what they want, and where they're heading, aside from the obvious destination of a Thanksgiving dinner that no one really wants to attend.

The cynic could easily crumble these pieces, among them stories of a dysfunctional family bound together by the scorn of a dying mother and an apartment building populated by human archetypes. Those who would dismiss writer Hedges' directorial debut as a small-screen sitcom blown up to fill a larger canvas could easily score points in an argument. You can't ignore the obvious: that Hedges' tale is the stuff of comfort-food cinema, a holiday offering in which everything's flavored by the tears shed whenever people feel too sad or become too happy. Movies like this are as inevitable as the holiday season itself; look no further than Home for the Holidays, The Myth of Fingerprints, or Planes, Trains & Automobiles, all of which might be considered precursors to Pieces of April with their blending of the wacky and the weepy. And Katie Holmes, the titular April, is no stranger to this subgenre, having appeared in Ang Lee's The Ice Storm, the chilliest Thanksgiving movie ever made.

Yet Hedges has made no half-cooked turkey; his is the proverbial feast, though it may consist at times of the pretzels and popcorn favored by the Peanuts gang. In the end, what makes Pieces of April work is its verité style, the way everything we see feels raw and genuine -- sincere but never saccharine, which might well have been the flavor of the story in which a dying mother unwillingly treks from the suburbs to Manhattan to see her estranged daughter one last time. This is the kind of story that Hedges, author of What's Eating Gilbert Grape? and adapter of About a Boy, tells almost better than anyone in movies today -- the story of a family falling apart to come together.

We're never quite told why April and her mother, the ironically named Joy (Patricia Clarkson, beneath a drab wig), do not speak; we know only that Joy favors her other daughter, Beth (Alison Pill), and tolerates husband Jim (Oliver Platt) and their son Timmy (John Gallagher Jr.). Joy has no good memories of April, who she believes was trouble from birth -- a baby who bit her nipples at breast feedings, only to grow up biting the hand that fed her. The good memories she has of April aren't of April at all, but of Beth; Joy, who we finally discover is dying of breast cancer, so wants there to be something warm and lasting, she's willing to overwrite one daughter on top of another. It's all Jim can do to convince Joy, made bitter and heartless by her illness, to see April at all.

But we see no evidence of any mean-spiritedness in April, a non-cook -- she could screw up canned cranberry sauce -- who tries nonetheless to give her mother a proper last supper. She craves closure of some kind, but will settle for a civilized meal. But the fates have conspired against April and boyfriend Bobby (Antwone Fisher's Derek Luke). Her oven doesn't work, forcing her to beg her neighbors to let her use theirs on the busiest cooking day of the year, and he can't find a thrift-store suit nice enough to impress her family. It's here that the movie edges toward slapstick, with April hauling a turkey up and down the stairs and yelling out for help. Her saviors are a kindly black couple, a cutesy Chinese family, and Will & Grace's Sean Hayes as a stuffy, dog-toting, pocket-watch-brandishing creep, who expects a little sumpin'-sumpin' in return for the use of his fancy-shmancy oven. They're all characters seeking their own spin-off series.

Pieces of April works when it shouldn't, because Hedges isn't interested in the Big Epiphany or the Heartbreaking Reconciliation (though, unfortunately, he ultimately finds it irresistible). He merely wrings big laughs and small sobs out of the trivial and familiar tension of family gatherings, and the pointless grudges family members hold against each other long after they should have disappeared. He's like Robert Benton or Hal Ashby, telling little stories about little people living little lives that add up to insurmountable problems; their suffering may seem insignificant to outsiders, but to those on the inside, it's suffocatingly unbearable. There's no reason for Joy to dislike her daughter, so far as we can tell; she just does, and Clarkson renders Joy's pent-up rage at her daughter and her own treacherous body so authentically that it's all we can do to remind ourselves that this is make-believe. It just feels like the real thing, which is a trick few writers can muster and even fewer directors can master.