Jonathan Wilhelm has kept a lid on his success for seven years. 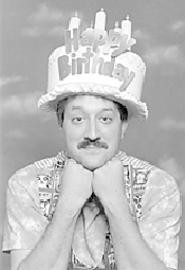 His name is Jonathan Wilhelm, but to the seven-and-under crowd, he's Mr. Hatbox, the flamboyant storyteller who pulls tall tales from his chapeaus each week during children's storytime at Borders bookstores throughout the area.

In seven years, the 40-year-old Lorain man has built an ardent following of both kids and parents. "We can't go anywhere anymore," says his wife, Diana, who's been pivotal in making the Hatbox dream a reality. "Children will run up to him and cling to his leg in the grocery store."

Storytime attendance at Borders has more than quadrupled since Mr. Hatbox began spinning colorful yarns based on hats he pulls from his black-and-white checkered box. Now he's celebrating his seventh anniversary with "The History of Hatbox," a series of special performances.

"I've always made a conscious decision that I don't want to fall into that 'Barney zone,' where it's appealing to two-year-olds, but parents get sick of it," says Wilhelm, whose appeal was evident among the more than 50 kids and "Hatbox Moms" at a recent Strongsville storytime.

After the show, he reminisced about his early days, before he had a hat or a box. "I had like six kids," he says of his first performance. "I did a circus show actually reading from a book. I didn't have my shtick developed yet." Soon after, Diana, the costume shop manager for the Great Lakes Theater Festival, decorated a top hat she found at Goodwill, unwittingly spawning his alter ego.

Shows on the anniversary tour will feature 20 of Mr. Hatbox's most popular hats, as well as classic stories like "The Big Green Monster Who Loved to Do the Twist."

"It's about a little boy who's afraid to sleep at night because of a monster underneath his bed," Wilhelm explains, reverting to his "storybook" voice, which sounds a little like B-52's singer Fred Schneider. "And the monster jumps out and sings, 'I'm a big green monster, and I love to do the Twist.'